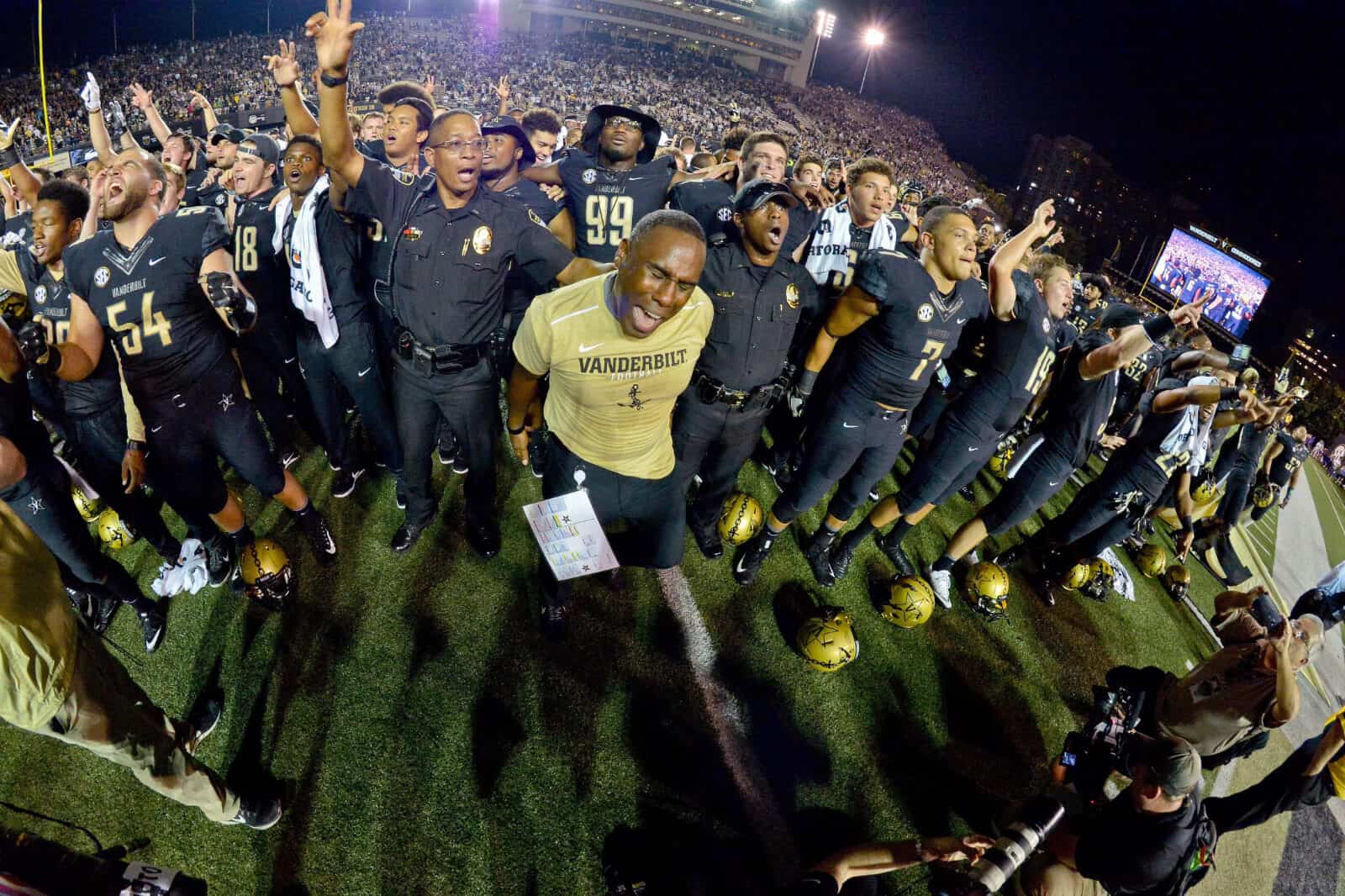 Welcome to 2017 SEC Football Predictions Week 4. I am off to a strong start in the early part of the season, but we are heading into the meat of the conference schedule over the next eight weeks, so it is all for naught if we can’t get it done when it counts.

SEC Football Predictions for Week 4 are hot and ready to serve. Come and get it.

Quick word of wisdom: Tell me something good. I’ll give you one for each team and then you can give me yours. Arkansas has beaten FAMU. Texas A&M has beaten Nicholls and Louisiana-Lafayette. There you go.

All kidding aside, this is a huge game for both coaches and both programs. As far as legacy goes, Arkansas wants to get a win over the Aggies because the Hogs have found new ways to lose this game each of the last four years. Two overtime losses coupled with an epic collapse or three have defined this series since 2013.

Arkansas comes in as a 2.5-point underdog and the only reason they should lose is the weight of recent history becoming too heavy of a burden for the Hogs to carry. Although Kevin Sumlin appeared much more relaxed this week during his weekly press conference, the heat will be turned up a few degrees if his Aggies do not come out and find a way to win this important game.

A&M will resemble TCU on offense, but will resemble Missouri on defense. Arkansas has a gutsy quarterback and a good running game. Although both teams have come out flat to begin the 2017 season, the game has potential to be very entertaining. Expect a good game between two desperate programs.
PREDICTION: Arkansas 35, Texas A&M 31

Quick word of wisdom: For the sake of sanity of our Volunteer brethren, let’s hope and pray Butch Jones and Tennessee decides to run the ball no matter how tempted they are to pass this weekend. John Kelly had a great game against Florida wasted by the Tennessee coaching staff. The Vols made a valiant comeback from 10 points down in the fourth quarter only to literally and figuratively throw it away by deciding to pass when inside the 10-yard line and even the five-yard line — when John Kelly was averaging 6.0 yards per carry. There is no excuse.

Just run the ball, Vols. Get the win and get ready for Georgia to come to town next week.
PREDICTION: Tennessee 35, UMass 7

Big game word of wisdom: Do not check the time and channel on this one. That is correct. CBS will feature this game as the biggest game of the week at 3:30 p.m. This is not the first game of a CBS doubleheader. This is the game that has everyone’s attention this week. This was once an annual Jefferson Pilot Sports “production” in the 1990s when these two teams played every year. This SEC Championship Belt title match finally gets the attention it deserves.

Although the ‘Tide have not lost in Nashville to the ‘Dores since 1969, Alabama vs. Vanderbilt in Nashville has produced some nail-biters for Alabama on more than one occasion since 1995.  The 2017 edition of this game could be another nail-biter for Alabama, but only until some point early in the third quarter. Expect Derek Mason and the Vanderbilt defense to do a great job forcing Alabama to become one-dimensional until sophomore quarterback Jalen Hurts can hit junior receiver Calvin Ridley deep when the Commodores secondary is in man coverage. Clemson was able to do this successfully in the national championship game, and although Vandy is no Clemson, the defense is very solid. Where Vanderbilt will eventually break down is up front. Alabama’s running back corps will punish Vanderbilt at the point of attack and accept what the ‘Dores give them up front. There will be a lot of running plays that go for four and five yards and Alabama’s offense is disciplined and patient enough to know that a huge run will break soon enough.

Alabama is an 18.5-point favorite and I think they will hover around that margin of victory once the game comes to a close. Vanderbilt has arrived and may even find a way to compete in the East, but they are not yet ready to shine on this stage.
PREDICTION: Alabama 31, Vanderbilt 13

Quick word of wisdom: All that talk and writing I’ve done bragging on the Gamecocks was scratched and slashed by Kentucky Saturday night in Columbia. We said this team will have a shot to compete in the East as long as Deebo Samuel stayed healthy. Unfortunately, his leg was broken in the loss to Kentucky, so with Deebo’s broken leg goes South Carolina’s season.

The Gamecocks will get back in the win column Saturday against Louisiana Tech, but what direction this team goes is anyone’s guess after that. The next two months will be a great testimony to Will Muschamp’s ability to not only be a good coach, but a great leader.
PREDICTION: South Carolina 28, Louisiana Tech 10

Big game word of wisdom: September 23rd has suddenly become a “Who is for real” day for at least two teams in the SEC. Mississippi State will more than likely be forced to stand in front of PETA and face accusations of abuse to a helpless animal. Dan Mullen and his Bulldogs were vicious. LSU politely accepted Mississippi State’s invitation to hang out and ring cowbells in Starkville only to be mauled and bludgeoned like a baby kitten in a dog pound.

Georgia, a 5-point favorite, went on the road (with half the state of Georgia) and defeated Notre Dame two weeks ago. The Notre Dame win was impressive in that these Bulldogs had a true freshman (Jake Fromm) make his debut start on the road in one of the most historic and iconic college football scenes in America. They also have two running backs that will play in the NFL and can make any quarterback’s job easier.

Nick Chubb and Sony Michel are a perfect combination on any offense, but especially a Kirby Smart-led team. Georgia’s defense is good and if they continue to improve, the offense can be as simple as picking which running back will get the ball and whether to run up the middle, to the left, or to the right.

This game will put Mississippi State or Georgia in the very exclusive pile of SEC contenders to challenge Alabama. Nick Fitzgerald and MSU are the prototype team to challenge Alabama while Georgia has the talent, but pro set offenses have never scared a Nick Saban team. One set of Bulldogs only has to worry about being better than another set of Bulldogs tonight. They can worry about Alabama in November… or December.
PREDICTION: Georgia 28, Mississippi State 20

Big game word of wisdom: LSU apparently forgot they were eligible to play football in the state of Mississippi last week when they showed up to Starkville and lit up the scoreboard for seven points. Luckily, the defense gave up 37 points to Nick Fitzgerald and the Bulldogs offense. As bad as LSU looked on Saturday night, they should look okay this Saturday night in Death Valley against a Syracuse team that is a Donovan McNabb and Jim Brown short of even having a prayer of being competitive. A loss by LSU and Ed Orgeron will find an interim tag sewn into his shirt.
PREDICTION: LSU 34, Syracuse 7

Quick word of wisdom: I mean, how bad is Missouri? If Vegas gives any indication, Mizzou is a 19-point underdog at home to an Auburn team that beat Mercer at home last week by 14. Auburn is a team going through an existential crisis on offense and I don’t know how long the defense can be patient while they hold down the fort. Vanderbilt has passed the “Remedy to a bad season” baton to Missouri and Auburn is in dire need of getting away from the state of Alabama and getting the temporary remedy of winning a conference game on the road.

Quick word of wisdom: It may finally happen, but I’m not sure if I should predict it. I think I’ve predicted a Kentucky win two or three times in this game only too see them fall short to the Gators. Kentucky is due to say the least. I’ll refrain from writing a sentence resembling “the last time Kentucky beat Florida, Hulk Hogan was WWF champion and the WWE was still the WWF.”
With all the above being written, I still think Kentucky gets a win over Florida for the first time in thirty years. Florida’s best offense so far in 2017 has been a pass that traveled 66 yards in the air and landed in the arms of a receiver on the final play of the game to beat Tennessee last week. That touchdown was the Gators’ second touchdown of the season.
Kentucky seems much more comfortable in their offense and defense and overall identity. The win over South Carolina was self-imposed and not because of South Carolina’s ineffectiveness. The Wildcats will get the plays needed from the confident Stephen Johnson at quarterback and Benny Snell, Jr. at running back to win a classic and slap a 30-year-old monkey off the back of the football program.
PREDICTION: Kentucky 37, Florida 31 – 2OT

Ok, I’ll take Bama 39-10. Magic Nick always gets up for big games, yes, this is a big game for Bama who is missing 5 linebackers & is struggling on defense. Vandy does not look all that hot but they’re playing at home & just beat K-State. Vandy will play hard as usual but this will be their 1st lost of the season. Plus I see a couple of turn overs that the Commodores will have that will give the Tide some extra points, good luck to them the rest of the way. I too have Arkansas beating A&M, I don’t know why but I just do. I also have Kentucky upsetting the fighting Gators, after that win last week over Tennessee, Florida may be on a high but their offense still sucks, last week watching them play the Vols in the 1st half was like watching my pool drain. I’ll also take Miss St over Georgia, Mullen has this team looking good unless LSU is just that bad, they gave up at the end of that game. I never cared for Orgeron & last week LSU looked the worst I ever seen them. Mizz season is OVER! They may beat Idaho but their defense is not even a defense, cheerleaders would put up a tougher fight! As for Auburn & Tennessee, they look the same from last two years as well, just like Florida. Tenn & Auburn need new coaches, I was hopeful for both programs this year but that’s what I said last year, the coaches there have had enough time to get it together. Bob Stoops is available!

Uhh, A&M has a better running game than Arkansas.