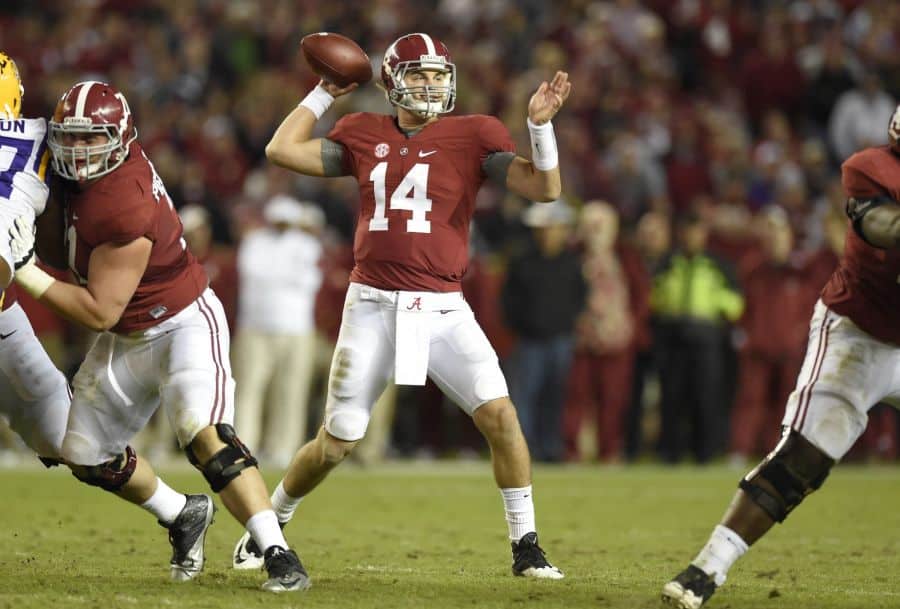 Welcome back to SEC Football Predictions, the place where overtime games are predicted. We nailed the Arkansas-Ole Miss OT game, but Alabama made haste with LSU and didn’t feel the need to win in overtime. With all that being said, our best week of 2015 came in Week 10, so we appear to be peaking at the right time. Very similar to Ohio State’s run in the final two months of last year’s national championship season.

The time has come for the trap game we’ve been warning you about for weeks to take place. Although LSU-Alabama was the marquee match-up for weeks, it was the fearless predictors at FBSchedules that have spent weeks looking at the trends and Dak Prescott and Mississippi State have “Don’t forget about us” written all over the latter portion of their 2015 schedule.

We are three weeks away from Conference Championship Saturday. We say it every season, but I really don’t know how we’ve gotten that far into the season. No need to cry about it. It’s only going to get better and better each week. As for us, we’ll take it one week at a time as we bring you Week 11 of  SEC Football Predictions.

Quick word of wisdom: Am I reading that correctly? There is a whopping total of seven conference losses among these two teams heading into the Deep South’s Oldest Rivalry. The last time this game was played at Auburn, the Tigers sold the first of two souls to the devil on a 4th-and-Opelika play to score the go-ahead touchdown in the final minute. Most normal people have one soul, but Auburn sold another one after a missed a field goal two weeks later in a football game played against another team from the state. Anyway, moving on….

This game should be interesting and has the potential to be very entertaining. There’s also a slight aroma of blowout seeping crawling around the Plains. There’s something about this game that just doesn’t seem good for Georgia. Auburn won a big game at Texas A&M last week and appears to have tightened the lug nuts on a season where the wheels were well on their way to falling off all at once. Don’t be surprised if this one provides a very entertaining opening act as the first of two games on CBS (second consecutive week with a doubleheader), but Auburn may win this one big, adding a little more electricity in Jordan-Hare Stadium for the Iron Bowl coming up in two weeks. Oh… maybe that “something” telling us this will be a blowout is Auburn defensive end Carl Lawson. The defense is an entirely new unit with him on the field.
PREDICTION: Auburn 34, Georgia 13

Quick word of wisdom: Holy cow, Florida. How bad did you want this game to matter? The level of “OHHHHHH NOOOOOOO!” going around The Swamp last Saturday when Vanderbilt led 7-6 late in the fourth quarter was off the charts. Florida had a walk-on kicker that was added to the roster that week and he proceeded to ruin any Disney scripts by shanking an extra point attempt and making zero field goals on the day. Jim McElwain was so shaken by the events of the kicking game that he put an injured kicker to win the game from 45 yards out. As we’ve grown accustomed to seeing over many years of watching SEC football, the winds of Vandy fate carried a ball true and through a hot, thick Swampy November air that had no business even getting off the ground from the foot of a kicker injured severely enough to be replaced by an open-tryout player, giving the Gators a — wait for it — come-from-behind victory over Vanderbilt, 9-7. They also picked up their first SEC East title since the days of Urban Meyer and Tim Tebow.

The Gators are well-coached and this team has bought in to McElwain’s system pretty early on. Granted, if they lose that Tennessee game, maybe we’re saying something completely different, but the fact that Florida won that game is proof enough that this team is all in. Careful with these Gators. They may just win their way to the College Football Playoff.
PREDICTION: Florida 28, South Carolina 10

Big game word of wisdom: Mississippi State is ranked fifth in the country for fewest penalties while Alabama finds itself in unfamiliar territory in 89th place. One quick factor to watch in this game is early penalties on either side of the ball, but especially from Mississippi State’s side. The Bulldogs are only eight-point underdogs and have a real shot to win this game (as I’ve pointed out in multiple weeks and again here). If the Bulldogs start jumping and drawing flags early on, it could be a long day for those holding on to hope for a huge season in Starkville. If they are practically mistake-free much of the season, but begin to make uncharacteristic errors in the early going, it will prove they are over-matched and just plain over.

The one piece of the puzzle for this trap game for Alabama was expected to be health and exhaustion. Alabama played a mobile and talented quarterback in 2012 in Johnny Football after a physical and emotional win over LSU the week before. Mr. Football catapulted himself to the front of the Heisman race and never looked back.

The best two takeaways for Alabama from last week’s win over LSU, besides the win itself, are first, Alabama dominated LSU for much of the game and really never found itself beat up or extremely exhausted. And second, the Tide go on the road, so there’s no time to hear how great they are and get complacent as fans reminisce about last week’s dominating victory, Derek Henry’s prospects of winning the Heisman Trophy and potentially looking down the road to Auburn, Atlanta, and Arizona. Road games have a way of cutting that kind of debilitating effect off at the pass.

Look for a big game from Dak Prescott at quarterback Saturday afternoon in Starkville, but look for a more timely and efficient game from Alabama quarterback Jake Coker. Coker’s ability to beat the Bulldogs through the air will open up running lanes for Derek Henry as the Alabama running back begins to solidify his case as the No. 1 Heisman Trophy candidate. Seeing the score without watching this one will not the game justice. It will be closer than the final score will indicate.
PREDICTION: Alabama 34, Mississippi State 17

Quick word of wisdom: Vanderbilt is about to get their second SEC win. Don’t laugh at this score. Vanderbilt’s defense is possibly the second best in the SEC. The scheme may very well be the best. Kentucky’s offense may be penalized for delay of game for insisting on running three plays rather than just punting on first down.

I promised the owner of the site that I would try not to be as snarky because it makes for better content, but I’ll just apologize in advance. This game will be ugly and the people deserve to know.
PREDICTION: Vanderbilt 3, Kentucky 0

Quick word of wisdom: A game between the Aggies and an out-of-conference opponent. Expect the expected.
PREDICTION:  Texas A&M 66, Western Carolina 14

Sneaky big game that could cause complete mayhem word of wisdom: Don’t look now, but with all the talk of Alabama and LSU and possibly Mississippi State being alive in the West, we’ve all completely forgotten about Arkansas. The Hogs are catching LSU at a good time after the Tigers left Tuscaloosa with the bruised ego of a team that had been dominated. Arkansas did Alabama a solid last week by handing Ole Miss their second conference loss with a great play where the receiver catches the ball, gets a few yards, almost gets tackled, throws the ball over his head so that the ball hits the ground and bounces right in the hands of the teams best running back. The running back picks it up and runs for a first down. It’s a play that only works on fourth-and-25 in overtime, so it was a perfect opportunity for the Hogs to run the play some (no one that I know of) are calling the Falling Statue Of Liberty.

An Arkansas win would pull them ahead of LSU in the SEC West, with the head-to-head victory occurring in that very moment. If Mississippi State pulls the upset over Alabama in Starkville, the SEC West will have five teams with two conference losses. Good luck figuring that tiebreaker out.

Quick word of wisdom: There will be a ton of conversation surrounding the football team and none of it will be about this game. This is one of those games where you want to say Missouri is very distracted and will get their hats handed to them even worse that originally thought, but sometimes it’s events like those going on in Columbia that bring a team together. This could very well bring the team together, but they will still lose to BYU.

Ok, I disagree with the LSU game, I think the tigers will be upset & being a night game in Baton Rouge the Hogz are not safe. I got Bama winning 31-17, close, not sure if they will look as good as last week though. Vandy 3 Kentucky 0?? That’s funny & no I’m not laughing, I have the Wildcats winning by a couple of touchdowns. I have Georgia beating Auburn even though the Tigers are playing at home.

South Carolina is gonna get their asses whooped either way. 36-14 is my pick.

I love my cougars, but I don’t think they put up 41 on Missouri. Missouri D has been good. I could see the cougars holding mizzou to 7, but not putting up 41.

I can see UF in the final 4 if they win out… Seeing they upset Alabama in the SEC Championship game.

How about them damn Seminoles!

Arkansas over LSU, @LSU, will blow my mind… I’m a neutral college football fan for the most part and understand Arkansas is a sneaky upset pick, but I just cant see it… Not after an Alabama loss.

How ya seeing it now?

Poor Eric (another Eric). David and Chris have gladly given him a friendly reminder about LSU. Wait until this week’s picks. It’s going to be one heck of a week in the SEC. Pre-rivalry week in the SEC is always the best…. Just kidding. It may be a 343-word post.