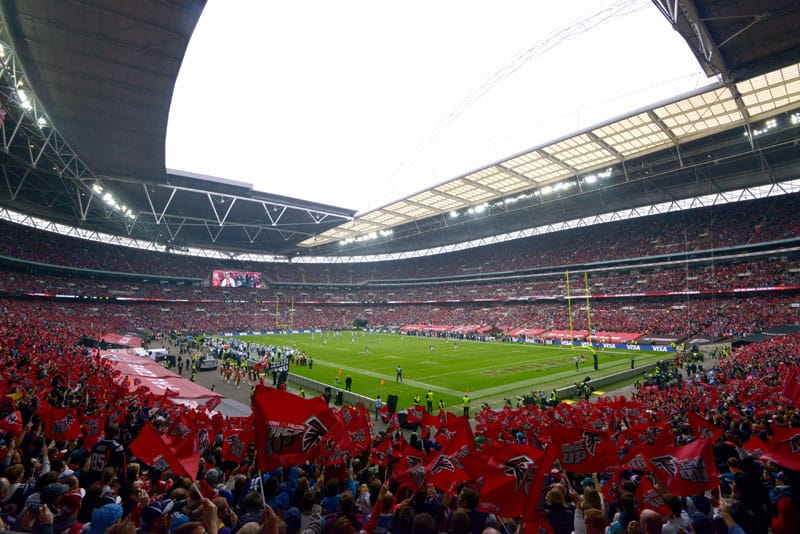 The 2015 NFL International Series schedule has been finalized with dates and times for all three match-ups.

The schedule features a 9:30 a.m. ET kickoff times for all three games, a time slot that was introduced last season.

The International Series kicks off in Week 4 on Sunday, Oct. 4, 2015 with the Miami Dolphins hosting the New York Jets. In Week 7 (Sunday, Oct. 25), the Jacksonville Jaguars host the Buffalo Bills.

The third and final game in London features the Kansas City Chiefs hosting the Detroit Lions. That game is set for Sunday, Nov. 1, 2015 (Week 8).

Each game of the International Series will be played at Wembley Stadium. Due to an increase in popularity of the games in London, the NFL added an additional contest for the 2014 season.

So they are rewarding crap teams with the opportunity to play in London? The only legit team in this list is Detroit. Get some really good teams to go to London

Not sure it’s considered a reward. It takes a toll on people with the time difference and all. More like a penalty!!

Good teams usually get marquee matchups, and the NFL doesn’t want to upset the hometown fans of those teams.

Those games certainly are not a reward for fans in London.

[email protected]#$ YOU!! The dolphins will be great with Kenny stills and suh. They have a good chance to compete for the division. GO FINS

The NFL should NOT be playing games in London. On another note, Fire Goodell.

Absolutely correct Matt, Fans pay big bucks for season tickets and they deserve to see all there games, The N.F.L. Executive’s, Goodell and everyone involved in sending our games to another country are cheating our American fans, it is all about the almighty dollar, if our brand of Football is so popular over there they would start there own league so that theory doesn’t float.

I won’t be getting up at 9:30 in the morning to watch NFL Football. That’s for sure.

I live in Japan. Live games start here as early a 3 a.m., Monday morning. When it comes to NFL games, sleep is highly over rated.

You don’t have to watch these games if you don’t want to. Nobody is putting a gun to your head and forcing you to watch any of the three games.

Besides, when did one country get a monopoly on NFL football? Let’s just look at North America as an example. If there are fan bases in Mexico City or Toronto that will love their team as much as any current fan base does, then why do national borders matter?

i say the 9:30 game when Detroit beat Atlanta and it was fine they do it so more people can watch the game

It’s not the same as watching live.

People living on the west coast watch NFL at 10 AM every year every weekend
!!!!!

I’m surprised that the kickoff time isn’t noon ET or after. You would think you could better get both the UK and US markets with the later timeslot.

But with 3 games, London’s almost half way to having a home schedule. Sounds like the end game is relocation or expansion into London.

I like the 8:30 CT starts as long as my team isn’t playing because I can just get up when it is around halftime and have football on when I wake up!

What is it with international games? Football in UK, baseball in Japan or Australia, hockey in Sweden and the Czech Republic, basketball in Mexico. You see, this is the One World theory which of course is a leftist scheme. Sorry, but politics enters the fabric of these decisions. And if you don’t believe it, check out the facts.

its all about the $$$$$$$$$$$. I watched last years game and it was kinda cool watching 4 games in a day. Your buddies can still come over at noon. The teams that give up there home game does it because they cant fill there stadium, (except for KC) they might have signed up for the game 3 years ago when they weren’t as good. The money they generate is huge and is one of the reason why the salary cap keeps going up. Jacksonville would have 40,000 people at best over there probably 80,000. With the ratings that game got it is another 3 1/2 hours of advertising. Like I said its all about the $$$$$$$$$$$$$$$$$,

Man people in London will think Miami is the best team in the league. Last year they got Oakland and now the Jets? Smh.

I think it should be Seattle vs. patriots in London, rematch!

So long as they don’t start at 9:30am I am all for that matchup.

In 2016 they can play that game Owen.l and the pats would be the home team.

I want to see a. NFL games played over in Dublin Ireland

A few year ago they had Notre Dame and Navy played over there in Dublin Ireland it a Beautiful Stadium as well a beautiful Country I really would love see some. NFL teams plays some games over there. It’s would be good for Ireland as well.

The NFL wants teams playing wherever they generate the most money,like tickets are not expensive in the US.They are building a stadium outside LA knowing an NFL team will relocate,so there is no loyalty to the fans.I live in Baltimore and new we were not getting the expansion team Jacksonville received and was at the circus they put on between Miami and New Orleans.in Baltimore that sold out in 45 mins.Now Jacksonville is up to be relocated to London.OOOPPSS 3 teams in Florida and the college teams sell more tickets.Colts are on there second new stadium.and the Rams left LA when the Bidwell family left a supported team like the colts in Baltimore for Arizona.It is IRONIC that the NFL would even consider letting the rams move to another new stadium and abandon there fans in both cities for new stadiums.When you burn your bridges I guess the NFL has to fly to London for new fans after the debacles from expansion to relocation left fans bitter and stunned toward the NFL.

It’s a curse for your team to play across the pond.