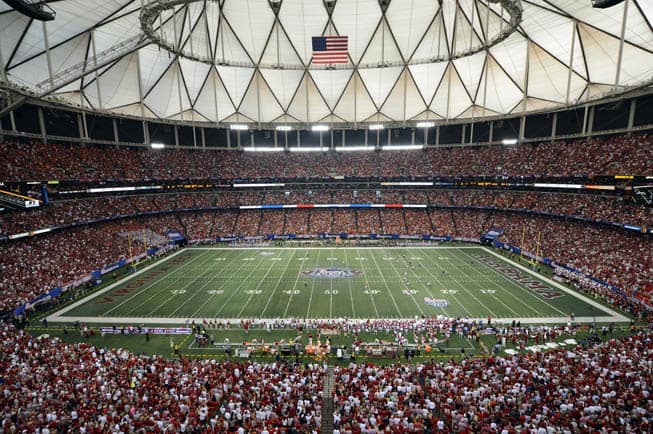 Neutral site college football games have become all the rage. This season features five contests across two days and involving some of the best teams in the country.

Today ESPN announced the kickoff times and television coverage for those five games. The action begins on Thursday, Aug. 28 with the first of two Chick-fil-A Kickoff Games in Atlanta. Boise State will take on Ole Miss at 8pm ET on ESPN.

The second Chick-fil-A game is on Saturday, Aug. 30 and features Alabama vs. West Virginia. Kickoff time, which was announced on Monday, is at 3:30pm ET with the broadcast set for ABC and ESPN2 (reverse mirror).

In addition to Alabama-WVU, Saturday’s slate of neutral site games also includes Penn State vs. UCF, Florida State vs. Oklahoma State, and Wisconsin vs. LSU. The complete schedule is listed below.

The Cowboy Classic along with the Texas kickoff are by far the best of the games. Alabama should rout West Virginia, the Breakfast bowl in Ireland can be missed and the worst of all is the Thursday game between hasbeen Boise and neverwas Ole Miss. Boise has fallen off the radar since Kellen Moore left and Ole Miss has been irrelevant in the SEC since Jim Crow Days in the 1950’s.

The SEC matches will prove the most relevant on opening weekend. Ole Miss vs Boise provides a nice display of a rising old power in Ole Miss against the strongest midmajor of the last decade. Not many who follow college ball will want to miss Alabama against West Virginia despite the Big XII’s inability to win many games out of conference. Wisconsin against LSU is highly anticipated but will prove a disappointment to some due to strong defense and low final score. Florida St and Oklahoma St will be a snoozer with never-was Okie State losing 28 seniors from their squad that proved unable to beat Oklahoma or Missouri last season.

Nothing “neutral” about a SEC team playing in Atlanta. Play THAT game in Minnesota and it’s neutral.

And play it in October…..

no one is stopping a B10 area city from hosting one of these games. If they aren’t doing so blame the B10 markets or schools. The constant excuse making by B10 fans really gets old.

while I get what you’re saying, it is STILL a neutral site game. even though you are closer than your opponent, you still don’t bring in quite the home crowd of what you would at home. plus being at your own stadium is an advantage. being in Atlanta is the same as being in Detroit if they both are not your own home stadium!!!

never understood the people who whine about this and say it’s not a “neutral” site game just because it’s closer to one of the schools. completely irrelevant…

jwmort’s comment represents they typical uninformed fan. Chick-Fil-A hosts the kickoff game in Atlanta because this is where their corporate headquaters are located. Atlanta is not home to any SEC team. There is only one SEC team in the state (Georgia) and an ACC team (Georgia Tech) calls Atlanta home. Only Auburn, located over an hour away, could be considered close to Atlanta.

Nothing is stopping a large corporate body from hosting games wherever they like. There simply is not the money or fans dedicated to college football located in Minnesota. Look at the attendance and TV viewership of the teams located in the Big Ten area. Outside of Michigan, Ohio St, and Penn St the teams garner near mid-major numbers. They perform poorly out of conference which leads most people to conclude that their play is 2nd rate.

Did you forget Nebraska?

Obviously you have never been to a game at Camp Randall Stadium in Madison. Oh and Wisconsin did play a “neutral site” game against NIU in Soldier Field in Chicago 3 or so years. Guess what? Game was sold out and even though it was technically a home game for NIU, I would estimate at least half was Badger fans. I know this because I was there.

All of the northerners are just mad that everything about the South is better. Football, weather, property taxes, economy…

Josh, that’s a good one and I am from the north, originally. :-)

Chik_Fil-A hosts the game in Atlanta because the rest of the country won’t put up with the homophobic crap.

His opinion is about taking away the rights of others. Many people including me, find it repulsive. I don’t understand why he wants to alienate half his customers. If he is against gay marriage, all he has to do is not marry a gay person.

Yes, he doesn’t have to marry a gay person. Just like he can share his opinions on the matter.

HIS OPINIONS on the matter have taken away ZERO rights. YES, you heard it here. ZERO.

Show me where the Chick-Fil-A’s owner’s beliefs have caused a person to lose their rights? I’ll be waiting…

YOUR opinion is YOUR opinion. I respect that. You don’t have to agree with his opinion but to not respect someone for the right to have and to voice their own is hypocritical. You can’t tell him what to do or what to believe just like he can’t tell you that.

No one lost any rights because Dan Cathy is a bigot. However he is still as bigot. My opinion is that he is a racist piece of human debris. Just of curiosity Travis, how would you feel about a KKK bowl or an American Nazi Party bowl?

That’s a nice (read: dishonest) way to frame that statement, Travis. You can’t take away a right that didn’t exist, but that doesn’t mean you aren’t denying a right.

I especially like how any criticism of someone’s precious opinion is construed as denying that person a right to have an opinion. Guess what? Some opinions are stupid and ignorant. I don’t have to treat an ignorant opinion as equal to a non-ignorant one.

Ace, here are my exact words ONE more time for you.

Honestly, I don’t know all of his opinions on the matter, nor do I care, because it doesn’t stop me from doing how I feel or believing what I believe in. Same goes to you.

You said some opinions are stupid and ignorant. Yes, in YOUR opinion they are. Just like someone else’s opinion might be different. So because this is your opinion on the matter, everyone else must do the same, because to you it is ignorant?

How about we stop worrying about how other people feel? It is not harming you, you know why? His opinion has no bearing on anything relating to civil rights. If you agree, disagree, hate, or are indifferent to a certain subject, that is YOUR right. He can express his beliefs just like you guys can boycott his company. The message I am trying to get out and unfortunately I don’t think it will be received due to ignorance, is that you don’t have to respect his opinion, but everybody should respect each others RIGHTS to having an opinion.

Bill, KKK and Nazi Bowl really? Still have yet to hear of any lynching or murders take place due to Dan Cathy? I must not be in the loop, fill me in please. That is an exaggeration. Spoken words coming from a man’s opinion being related to mass murders and physically harming human beings. Really? Wow.

And I have the right to say his opinion is hateful homophobic crap.

Everything about the south is better except for the part where north has better economy, better schools, and full set of teeth. But southerners sure do look pretty in their greys commemorating a butt whooping they got from us 150 years ago

Well LSU take the plunge in 2015 and plays Syracuse…….a few years ago they played at West Virginia. Alabama and Auburn playing in the north……..never

Auburn played at West Virginia in 2008, at Syracuse in the early 2000s, Alabama played at Penn State in 2011. You must have missed all of that