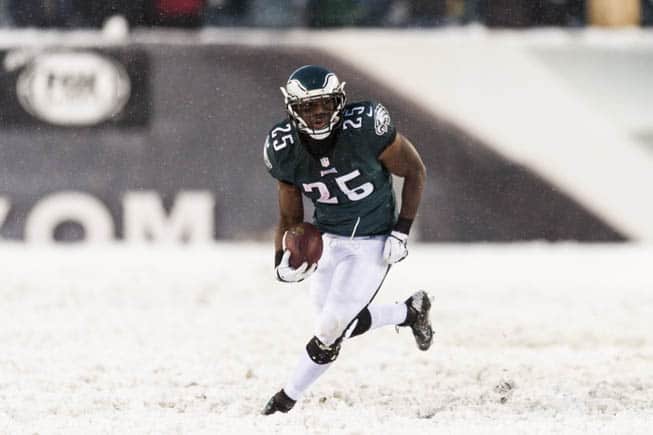 LeSean McCoy and the Eagles are 8-5. (Howard Smith-USA TODAY Sports)

Two NFL games on the schedule for the Week 16 (Dec. 22, 2013) have been moved in accordance with the league’s flexible scheduling rules.

Chicago at Philadelphia, which was originally scheduled for 1pm ET on FOX, has been moved to the Sunday Night Football slot at 8:30pm ET on NBC.

The Bears and Eagles are both in playoff contention. Chicago is currently in the hunt for a spot, while Philadelphia is a projected 3rd seed if the playoffs started today.

New England at Baltimore was originally scheduled for Sunday Night Football on Dec. 22, but it has been moved to 4:25pm on CBS.

The Patriots haven’t officially clinched a playoff spot, but they are 10-3 overall and currently lead the AFC East by three games. Baltimore is 7-6 and is currently projected as the 6th seed.

I will write a strongly worded letter to the NFL to oppose this!

Now Jim Nantz can call yet another Patriots game on CBS…….he strives for 10/year.

And the raven’s and patriots aren’t in contention?? One of whom is the defending would champions? Give me a break? I hope your numbers tank. Obviously, the NFL it’s clueless; they seriously think Philly and Chicago it’s a better game and will get better ratings…..wake up!

You’re right, they are both in contention. Not sure why they opted to move it.

Prior to, CBS was stuck with Pit/GB (likely w no Rodgers) and Oak/SD in the 4:25 slot, and I don’t think they can have just three games in a 1:00 window in a non-bye week (thus no Ind/KC flexing). So it’s a help-out to CBS from the NFL. Besides, we’re complaining about the Patriots NOT being on Sunday night? Spare me……………………….

Also FOX already has the Saints/Panthers rematch as their #1 1:00 game. You could say flex that but not only was that just on but FOX already went without either Hawk/Niner game in 2012, they’re not going to not protect this one.

If any game should have got it should have been Cards/Hawks. Not only a singleheader 4:05 game, but how does NBC not have the team with the NFC’s best record (3-1 vs the 2-3-4 teams) on more than once? But it is what it is.

So here’s an idea, drop the phony outrage.

Chicago is hot right now with McCown playing better than Cutler. So change channels if you don’t like it.

$&@! u guys Philly all the way! This is guna be way better game than the 7-6 defending champs who aren’t even guna make the playoffs!

Since when is 8:30 PM EST on a Sunday “prime-time”? Most folks have to go to work the next day. I never stay up until Midnight to watch any game. I’m in bed by half-time. Bummer.

I think it’s a chance to grab an extra market (Chicago/Midwest) in prime time. I recall reading a long time ago when Chicago was horrendous and “banned” from MNF — they missed the ratings the Chicago audience brought.

as an eagles fan I think its bullshit that I can’t enjoy a game and have a couple beers. If its 1:00 then its 1:00 don’t fuck us fans

Posted by Mike Florio on December 11, 2013, 1:48 PM EST
AFC Championship – Baltimore Ravens v New England Patriots
Getty Images
Tuesday’s decision to replace the Week 16 Sunday night game between the Patriots and Ravens with a showdown between the Bears and Eagles surprised many.

And for good reason. The Ravens are chasing the No. 6 seed, the Patriots are chasing the No. 1 seed while trying to hold off the Bengals for the No. 2 seed, and the two teams have met in the last two AFC title games. (That said, Bears-Eagles has significant playoff implications, too.)

So why did the NFL swap the games? According to John Ourand of SportsBusiness Journal, the league made the decision in part to have maximum flexibility for the regular-season finale in Week 17.

The current broadcast contracts (which expire this year) require that the gap between games pilfered from CBS and FOX for Sunday night be no more than three. If Pats-Ravens hadn’t been flexed, the gap would have been at three, with CBS losing 25 and FOX losing 22. Without taking a game from FOX for Week 16, only FOX could have lost a game for Week 17. Now, both networks are in play for Week 17.

The goal for the league (and it’s always an NFL decision, not an NBC decision) when selecting the prime-time game in Week 17 is to identify a game that has playoff implications unaffected by any of the outcomes in the other 15 games. That becomes easiest when two teams are squaring off for a division title, with the winner securing a playoff spot and the loser earning a trip home.

What moron thinks Philly and Chicago is a better game than Ravens vs. Patriots?? Idiots!