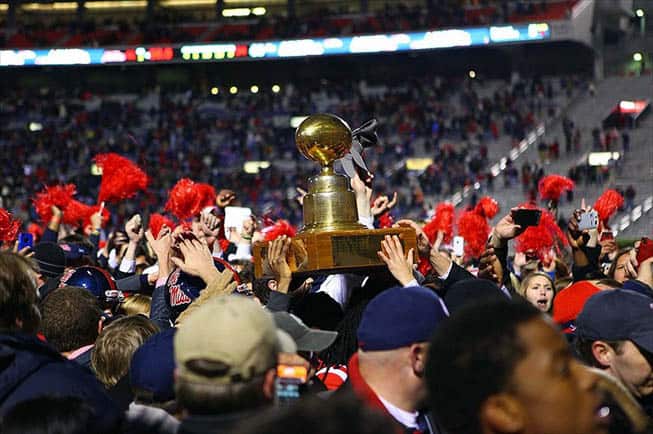 The 2013 Egg Bowl between Mississippi State and Ole Miss has been moved to Thanksgiving night. The game will kickoff at 7:30 p.m. ET on ESPN.

Mississippi State, which will host this year’s annual rivalry game at Davis Wade Stadium in Starkville, hosted the last Thanksgiving Egg Bowl back in 2003.

“This is a tremendous opportunity for our state’s largest football game to be played on the largest stage of a crowded football weekend,” MSU director of athletics Scott Stricklin said. “Some of the most memorable games in Egg Bowl history have come on Thanksgiving night, and hopefully more great memories can be made for Bulldog fans on this holiday evening.”

Ole Miss won last year’s meeting against Mississippi State 41-24 and leads the overall series 61-42-6. The Rebels also hold a 15-9-1 lead against the Bulldogs on Thanksgiving.

“I think it’s great for this storied rivalry to return to Thanksgiving Day,” Ole Miss head coach Hugh Freeze said. “There were so many memorable moments from our meetings on that holiday in the past, and I hope to see a big Rebel turnout in Starkville this year.”

This is odd. Isn’t Texas Tech/Texas already confirmed for Thanksgiving night on ESPN? Or will that game be part of a doubleheader with the Egg Bowl? Odd that there would be two Thanksgiving games.

That hasn’t been announced yet. Speculation is that Texas/Texas Tech will move to Fox Sports 1 if it stays on Thanksgiving.

why is Texas game keep getting moved and SEC is all the attention like always. Im hoping at least game against BYU and ole miss is on espn for Texas.

This is a good move for both teams. On ESPN on Thanksgiving night? I will watch it.

When are BYU and Ole Miss scheduled to play?

They do not have any future games scheduled.

Ah, I misunderstood Laurance (sic) the first time. That’s what happens when I’m at work and I read others’ comments too quickly. I thought he was saying that BYU and Ole Miss were playing each other, but what he actually meant was that both of those schools play Texas this year.

I am sensing a trend here.

The Texas Tech vs. Texas game has been moved to the Longhorn Network. :p