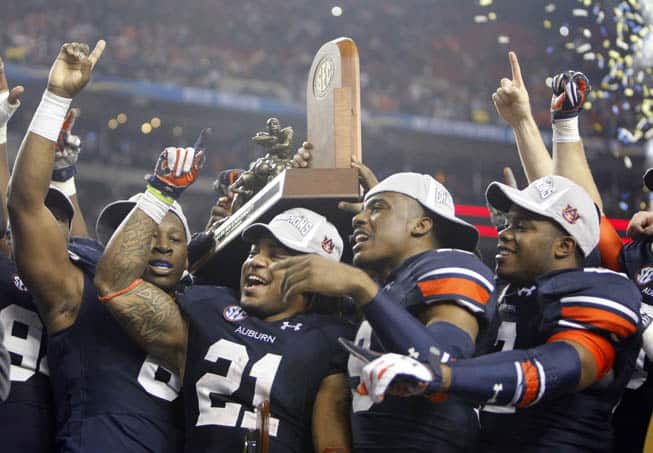 The 2013-14 College Football Bowl Schedule was finalized this evening and announced during the Bowl Selection Special on ESPN.

See the links below for the complete bowl schedules.

Eligible Teams Not Playing in a Bowl

Why wasn’t Oregon, which was rated above Oklahoma in the final BCS standings, selected to play Alabama in the Sugar Bowl? Did Bama get their choice of opponents and select the team they felt more confident that they could defeat?

The Sugar Bowl gets to pick who they want, and they picked Oklahoma over Oregon.

Are games selected based on viewer-ship? Money to be made from commercials, ticket sales, etc?

You think Oregon is better than Oklahoma? Pffft! Son, the big 12 is the most underrated of all the conferences. Oregon is not all they are quacked up to be! lol

Because Oklahoma will sell around 10,000 more tickets and game will sel out OU is like 2000 miles closer

For the first time in my life…I may be rooting for Oklahoma.

Im an auburn fan but do you really think Oregon could beat Bama. Bama would destroy them just like Arizona did but a bunch worse. Oregon plays decent until they play someone good.

They couldn’t find room for one of the FOUR Sunbelt teams that went 6-6? Good showing by the SB this year sans Georgia State.

3 PAC-12 vs. 3 MWC? Can we get some diversity in the conference match-ups? And so few mid-major vs AQ games—-people tune in to watch those….suggest they try for more in future seasons.

Definitely would like to see some Pac-12 vs. SEC match-ups.

right, robert. better to just let the MWC teams show their dominance over the PAC on the hardwood.

Would be great if you were able to create a helmet version of the bowl schedule!

Simononsports used to created them sized 11×17 but it printed fine at letter size.http://simononsports.blogspot.com/

Most Bowls have a commitment with two conferences for their selection choices. Like x#2 vs. y#3, x#4 vs y#1, etc….. Wake up.

Most are aware of that, they would just like to see some different matchups. Won’t happen though unless there are last minute swaps or trades.

Why isn’t it possible to find a printable bowl schedule that lists the game times in Pacific Time? Or for that matter, any time zone except ET? Sure, I can made the mental adjustment, but the failure to produce the variants is just stupid. We don’t all live in Atlanta or New York.