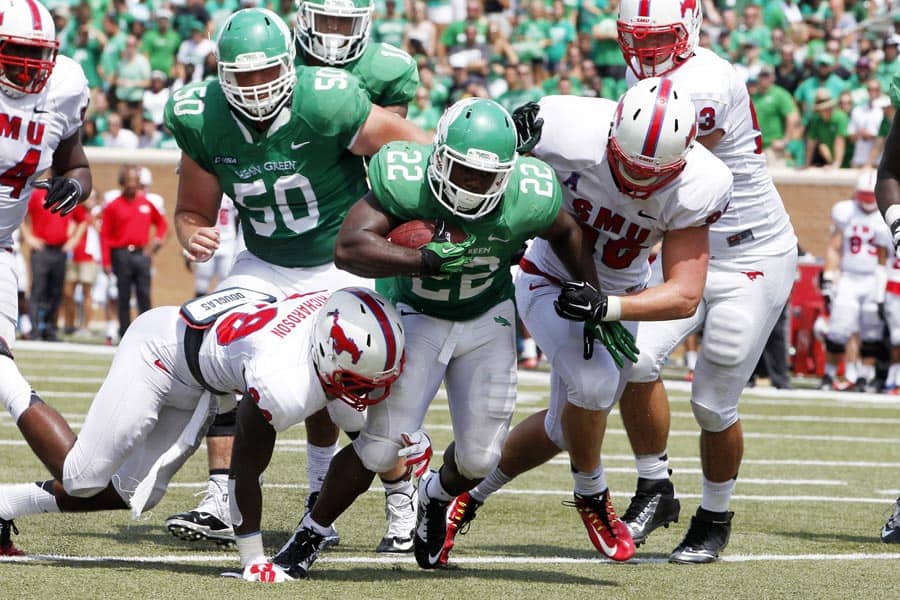 Did you know that Duke and Northwestern are scheduled to play games each of the next four seasons?

Though there are tons of home-and-home series to look forward to in college football, there are a handful of matchups that will feature more than a pair of games.

The following list highlights contests that you will see not only in 2015, but at least two additional times in the coming years, making them regular fixtures on the non-conference landscape.

Though some are clearly more desirable than others, all will play a part in the strength of schedule conversations that are a natural result of the new College Football Playoff.

Maryland and Bowling Green have never squared off in football, making this season’s showdown in College Park a first-ever. The two won’t meet in 2016 or 2017 but have a home-and-home series slated for 2018 and 2019.

Maryland has only played 12 previous games vs. MAC members, most recently beating Eastern Michigan 51-24 in 2008. Its last loss to a MAC opponent came in 2003, when the Terps traveled to DeKalb and fell 20-13 to Northern Illinois.

The Spartans and Broncos last squared off in 2013, a 26-13 Michigan State win. Western Michigan has had eight previous whacks at MSU and has never won. The series dates back to 1980 and has never been played outside of East Lansing.

The first-ever meeting in Kalamazoo is slated for this season, while the 2017 and 2019 games are back in Spartan Stadium. The two schools are only 80 miles apart.

These two Bulldogs have clashed five times in history, Mississippi State leads the all-time series 3-2 and won the last meeting 26-20 in Starkville. Prior to that, Louisiana Tech captured two straight, a 38-23 win in 1996 and a 22-14 victory in 2008.

This season’s game is slated for mid-October in Starkville, while the 2016 edition will be in Ruston. In 2017, the matchup will return to Mississippi.

Another first-ever, Oklahoma State and Central Michigan have never met on the gridiron. The Cowboys are 4-0 all-time vs. the MAC, most recently scoring a 31-14 road victory over Northern Illinois in 1994. The Chippewa’s are 0-2 vs. Big 12 members, both losses coming to Kansas, most recently in 2014.

Oklahoma State will make the trek to Mount Pleasant, Mich. this season, while the 2016 and 2018 games are scheduled for Stillwater.

Given that these two schools are only 85 miles apart, it’s no surprise that the Rebels and Tigers have had 45 previous meetings since they first met in 1960. The two played as recently as last season, Ole Miss is on six-game winning streak and holds a 33-10-2 all-time lead. Memphis’ last victory came in 2004.

The two will meet in Memphis this season, play in Oxford in 2016 and then return to Liberty Bowl Stadium in 2019.

Rice and Army have met five times previously, the most recent coming last season when the Owls traveled to West Point and won 41-21. Rice holds the all-time advantage 3-1-1, Army’s sole victory dating back to a 1958 win in Houston.

UCF and FIU met consecutively from 2011-13, also their only three meetings in history. The Knights hold an all-time 2-1 advantage and haven’t lost since the first game back in ’11. The two schools are located 235 miles apart.

The series will renew in Orlando this season, returns to Miami in 2016 and shifts back to UCF in 2017.

Vanderbilt and Western Kentucky have never met in football, but the two schools are located a convenient one-hour drive apart. The Hilltoppers are 2-17 all-time vs. the SEC, the only wins coming in back-to-back victories over Kentucky in 2012-13.

The first-ever meeting between the schools is slated for Sept. 5 in Nashville, the second moves to Bowling Green, Ky. and the third, in 2017, is back in the Music City.

Believe it or not, these two schools have met six times previously and have squared off as recently as 2009. Wisconsin is 5-1 all-time vs. the Warriors, the only misstep coming when the series kicked off in 1986, a 20-17 loss in Honolulu. The two have only met in Madison once, a 1987 game the Badgers won 28-7.

Army and Eastern Michigan have met six times previously, playing five games since 2008. The Eagles have only beaten the Black Knights once, a 48-38 triumph in 2012 in Ypsilanti.

The last time these two schools clashed was a home-and-home series in 2009-10, splitting the games one apiece. Prior to that, Duke and Army met 20 times between 1944 and 1997. The Blue Devils have a narrow 11-10-1 advantage in the all-time series.

Duke’s other four-game, non-conference series is with Northwestern, a team it last faced in 2008. The Blue Devils and Wildcats have clashed 16 times in history, the series tied at eight games apiece.

Besides Western Kentucky, the other team featured multiple times on Vandy’s non-conference dance card is Middle Tennessee, a school located just south of Nashville. The Commodores and Blue Raiders have met three times previously, all since 2001. Vandy is 3-0 vs. MTSU, but the average margin of victory is a mere four points.

The only FBS squad with a long-term series scheduled with an FCS foe, Iowa State has played FCS Northern Iowa three of the last five seasons and is slated for four more games in the next five years. The series between the two dates back to 1899, the Cyclones hold a 20-5-3 advantage but dropped two of the last four including a 28-20 loss in 2013 in Ames.

All six of the future games are slated for Iowa State’s Jack Trice Stadium.

The 10 games SMU and North Texas have scheduled between now and 2025 matches the total number of games the two teams have played in history. The series stretches back to 1974, the Mustangs are 7-4 all-time vs. the Mean Green but have dropped two of the last three, including a 43-6 defeat last season. North Texas’ campus is in Denton, about an hour’s drive north of SMU’s home in Dallas.

The 10-game series features five home-and-homes, kicking off with this season’s Sept. 12 meeting in Denton at North Texas’ new Apogee Stadium, open for business since 2011.

I’m confused why Memphis & Ole Miss made the list if longstanding rivalries were supposed to be left off.

Utah-Northern Illinois not on here?

I know they’re playing every year from now until 2022 or whatever, so maybe it went into the category of SEC-ACC perennial games or USC/Stanford-Notre Dame, but Boise State and BYU is not on this list but is a very intriguing matchup that will be taking place every season for at least the next 7-8 seasons.