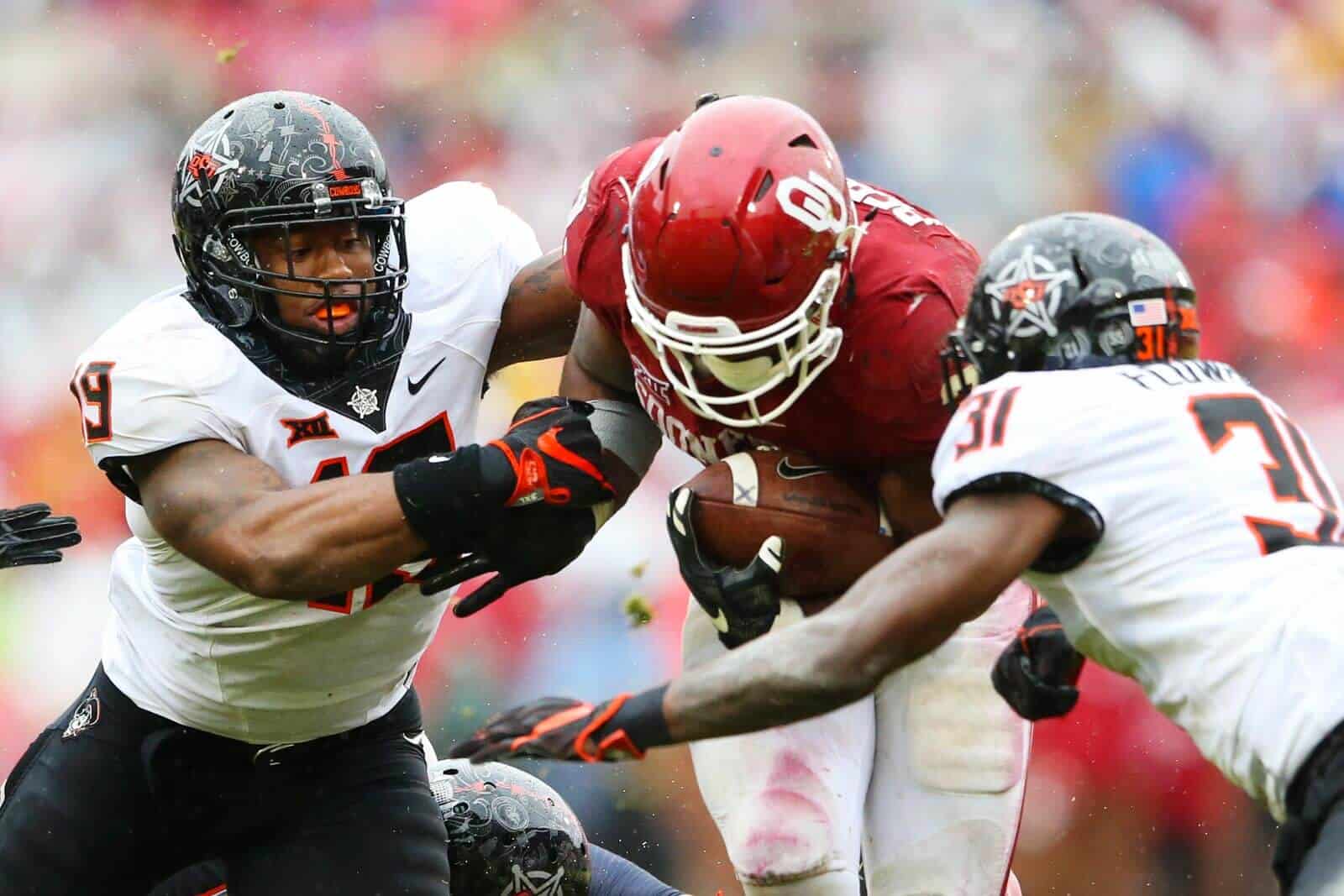 With five regular-season games on tap this Saturday and a full start slated for Labor Day weekend, the 2017 college football season is finally, at long last, upon us.

To whet your appetite, what follows is a handful of fascinating elements unique to the 2017 college football schedule.

There are FIVE first-ever matchups between Power programs

With almost 150 seasons of college football in the books, it’s hard to believe that these major programs have never met on the gridiron. All that changes in 2017.

UAB is a member of the Conference USA’s West division, joining Louisiana Tech, UTSA, Southern Miss, Rice, North Texas, and UTEP. The school didn’t field a football team until 1991 and is 118-153-2 all-time. The Blazers have never won a championship and are 0-1 in bowl play.

Once an annual affair, the Bayou Bucket is awarded to the winner of Houston vs. Rice, a rivalry game played consecutively from 1971-95 and 1999-2013.

The two schools are located a mere five miles apart in Houston, also known as the Bayou City. The first game between the two, in 1971, was also Houston’s first-ever league game as a member of the Southwest Conference. The 1995 contest was the final SWC game in history.

MICHIGAN STATE doesn’t play outside the state of Michigan until Oct. 14

No Power team will stay inside of its own state lines longer than Michigan State. The Spartans open the season by hosting Bowling Green and Western Michigan before taking Week 3 (Sept. 16) off. In Week 4 (Sept. 23), Notre Dame comes to town followed by a visit from Iowa in Week 5 (Sept 30). They finally venture outside East Lansing in Week 6, also the first game in October, traveling 65 miles south to Ann Arbor to play (11) Michigan.

That makes the Week 7 (Oct. 14) road trip to Minnesota their first game outside of the Great Lakes State.

It’s been seven seasons since Baylor scheduled a Power member outside of Big 12 action. The year was 2009 and the Bears traveled to Wake Forest in the season opener and won 24-21. It was also the last year Baylor posted a losing record – finishing 4-8 before improving to 7-6 in 2010 and never looking back.

Stanford opens-up vs. Rice in Sydney, Australia this Saturday, Aug. 26. After taking next weekend off, it travels for back-to-back games at (4) USC and at San Diego State. The Cardinal finally treats its home crowd to an appearance in Week 4 when UCLA comes to town.

It’s the latest home opener since 1989, when Stanford trekked to both Arizona and Oregon State before hosting Oregon on Sept. 23.

(2) OHIO STATE opens the season vs. a Big Ten opponent for the first time since 1976

The Buckeyes travel to Indiana to open their 2017 campaign next Thursday, Aug. 31, marking the first time in 41 years they’ve started a season with a conference game.

Though then No. 6 Ohio State kicked off 1978 with a visit from (5) Penn State (a 19-0 loss), the Nittany Lions were still an independent then, 15 years away from joining the Big Ten.

UCLA and HAWAII play for the first time since 1939

The last time UCLA and Hawaii met on the gridiron Franklin D. Roosevelt was the president of the United States and Texas A&M won the national championship in college football.

Besides hosting the Pinstripe Bowl in the postseason, Yankee Stadium will welcome Rutgers and Maryland on Saturday, Nov. 4.

In Fenway, Boston College will take on UConn on Saturday, Nov. 18. The weekend before that, Nov. 11, the Green Monster will host UMass-Maine and Brown-Dartmouth.

Except for 2012, Oklahoma-Oklahoma State has been played as the regular-season finale for both schools every year since 2005. This season, the (7) Sooners and (10) Cowboys are slated to play on Saturday, Nov. 4, the earliest they’ve met since 2004 when the game was slated for Oct. 30.

The Trojans have the worst bye week of 2017, playing their entire regular-season slate consecutively before finally getting a breather in Week 13 (Nov. 25). If they win the South Division, the break will come the week before the Pac-12 Championship Game, slated for Friday, Dec. 1. If not, it will do nothing but extend the time off between the regular-season and a bowl appearance.

With 254 combined seasons and 11 national titles between them, it seems almost impossible that these two storied programs have never met on the gridiron. All that changes on Saturday, Sept. 16 in the historic Horseshoe.

Boston College, Illinois, Navy, and Northwestern all drop their long-standing, yearly cupcake matchup for the first time since 2005.

Boston College hasn’t lost to a “non-Major” opponent since 1978 when it fell to UMass, then a member of the Yankee Conference. For Illinois, it’s been since 1938, when it lost to Ohio, then a Buckeye Athletic Association member. Navy fell to an FCS team as recently as 2007, when it got edged 59-52 in a defensive showdown with Delaware. That leaves Northwestern, which lost to Illinois State just last season.

The Irish welcome Miami University to South Bend on Sept. 30 and then travel to the University of Miami on Nov. 11. The last team to play both schools in the same season was Cincinnati in 2014-15. The Bearcats, which play Miami (Ohio) annually as a rivalry game, also faced the duo in 1998.

UTSA doesn’t play outside the state of Texas until Nov. 4

With a dozen FBS teams within Texas state lines, it’s no surprise that UTSA is the non-Power school with the longest stretch of “local” fixtures in 2017. The eight-game, all-Lone Star run includes four home dates in San Antonio and then visits to Waco, San Marcos, Denton, and El Paso.

Of its 12 regular-season games, UTSA plays 10 in Texas and six against Texas schools.

(22) West Virginia and (21) Virginia Tech open-up the season on Sunday night, Sept. 3 in Landover, Md. Not only will it mark the first time the two former Big East rivals have played in 12 years, it will be the renewal of the battle for the Black Diamond Trophy.

Though the series dates to 1912, the trophy wasn’t first awarded until 1997. The schools are located 250 miles apart in coal country, hence the prize’s name. They played consecutively from 1973-2005 but haven’t met since. West Virginia leads the all-time series 28-22-1, Virginia Tech has won two straight and has captured the Black Diamond six times vs. the Mountaineers’ three.

Alabama plays only one game, A&M, that is more than 250 miles from their campus.

Had to stop when they said byu was a P5 team. XD

They are considered a P5 team for scheduling purposes by all the P5 conferences.

Nice to see West Virginia and Virginia Tech hooking up again, but with the Big 12 having 9 conference games per member, I’m not sure they’ll meet again any time soon unless they meet in a bowl.