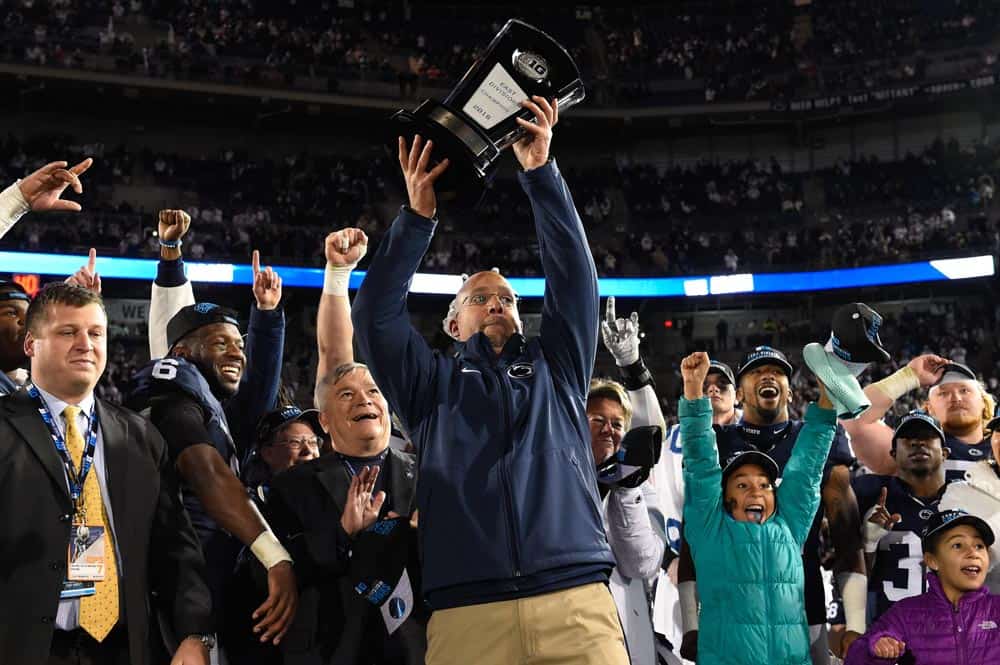 Week 14 of the college football schedule means it’s time to crown a champion in each of the eight FBS leagues that host a title game.

Other than that, it’s the Sun Belt and Big 12 mopping up the remainder of their regular-season slates – including the clash between (9) Oklahoma and (10) Oklahoma State, which will decide the conference title without being an official championship game.

Ranked vs. ranked action holds steady at five – the same number as last week but all the more impressive since there are fewer than 20 games this weekend.

What’s unique about the 18 schools vying for a title in 2016 is that more than half of them (66% to be precise) are in a conference championship drought. Take a look.

If nothing else, the 2016 regular-season will end with a huge bang for a lucky few fan bases, potentially enjoying long overdue celebrations.

STREAK OF THE WEEK

The American Football Championship Trophy – Temple at (19) Navy – series started in 1988 – Navy leads 6-5-0. The two teams last played in 2014 and have never met in the postseason.

The American Athletic Conference began its operations in 2013, but it didn’t conduct a football title game until last season. Temple lost to Houston 24-13 in that game, making the Owls the only team to have made the championship in each of its two years.

Though Temple has won the AAC East twice, the MAC East in 2009 and the Middle Atlantic University Division in 1967, it’s never won a full-fledged conference title in history. Navy won it’s first-ever football title this season by virtue of winning the AAC West, but it’s also never won a league title. What’s held Navy back is its long run as an independent, a 135-year stretch that ended last season when it joined the AAC.

Though the title game itself dates back to 2005, the current ACC trophy was unveiled 2013. The ACC football, which is removed and given to the winner on the field, sits on top of a 32-inch base which is retained by the victorious school. After six straight years in Charlotte, North Carolina the game is Orlando for the first time.

Clemson beat North Carolina in last year’s ACC title game, but before that hadn’t ascended to the championship since 2011. That’s also the last time Virginia Tech won the Coastal division, falling to Clemson 38-10 in the title game.

Clemson is 2-0 in ACC championship play vs. Virginia Tech’s 3-2 mark. The Hokies played in five of the first six ACC title games, but haven’t won the whole enchilada since 2010.

Despite the Big 12 being the only Power league without a title game, this year’s championship will be decided in Norman, Oklahoma, making this the most meaningful Bedlam in history.

The original traveling prize for Bedlam was the clapper from the bell that hung in Old Central on the Oklahoma State campus. The first time the Cowboys (originally the Oklahoma A&M Aggies) ever beat the Sooners, in 1917, the bell was rung all night. The clapper was eventually absconded, changing hands until 1966, when the two schools agreed to use it as a trophy. It has since been replaced by a crystal bell.

Though C-USA has been hosting a conference championship game since 2005, it unveiled a new trophy in 2015. Louisiana Tech has played in the C-USA title game once previously, in 2014, when it fell 26-23 to Marshall. WKU’s one and only appearance was last season, when it beat Southern Miss 45-28.

The two schools met for an even bigger title in 1973 – in a Camellia Bowl that also decided the D-II National Championship. The Bulldogs won that game 34-0.

Ohio has won 11 all-time conference titles (five in the MAC and six in the Buckeye Intercollegiate Athletic Association). WMU has just three (two MAC and one Michigan Collegiate).

The Mountain West title game dates back to 2013, making this year’s edition the fourth-ever. San Diego State made it’s one and only appearance in the MWC championship last season when it edged Air Force 27-23. Not only is it Wyoming’s first time to play in the conference championship game, it’s the Cowboys’ first opportunity to win a league title since capturing the WAC in 1993.

Weighing in at 58 pounds, the Pac-12 Trophy was unveiled in 2011, the same year the league hosted it’s first-ever title game. Designed by a UCLA grad, the trophy “begins with a 12-sided base to represent all 12 schools before rising up and splitting into an arched V-shape, with the two equal segments representing the North and South divisions.”

Neither Washington nor Colorado have ever played in the Pac-12 championship game. The Huskies last captured a piece of the Pac-12 (then Pac-10) title in 2000. The Buffaloes, who joined the league in 2011, haven’t won a league championship since conquering the Big 12 in 2001.

Washington has 15 all-time conference titles (11 in the Pac-10 and four in the Pacific Coast) vs. Colorado’s 26 (one in the Big 12, five in the Big Eight, four in the Mountain States, nine in the Rocky Mountain Athletic and seven in the Colorado Football Association).

Updated in 2013 to better display the conference logo, the SEC trophy features three stacked football players on a wooden base inscribed with the names of the league’s 14 members.

The SEC’s title game dates back to 1992, the oldest championship match in the FBS. Alabama has appeared in 10 SEC title games, are 6-4 all-time and have won two straight. Florida has 11 previous appearances, are 7-4, most recently losing to the Tide last season. The two schools have played for the title eight times with each team winning on four occasions. The Gators haven’t won since 2008, when they beat Alabama 31-20.

Overall, Alabama has 29 conference titles (25 in the SEC and four in the Southern) vs. Florida’s nine (all in the SEC).

Up until 2011, the Big Ten’s football championship trophy was called the Paterno-Stagg Trophy, the Paterno tag dropped in the wake of the scandal at Penn State. Now the Stagg Trophy, it honors Amos Alonzo Stagg, who coached at the University of Chicago (then a Big Ten member) from 1892-1932. Not only did Stagg lead the football Maroons to national championships in 1905 and 1913, he coached the basketball team for one year and the baseball team for 19 seasons.

The Big Ten, the oldest FBS league, didn’t begin hosting a conference championship game until 2011. Wisconsin has made the title game three times, winning in 2011 and 2012, but losing in 2014. This is Penn State’s first appearance and it’s most recent opportunity to win the Big Ten since doing so in 2008.

Wisconsin has 14 conference titles (all in the Big Ten) vs. Penn State’s four (three in the Big Ten and one in the Pennsylvania Intercollegiate Football Association). The Nittany Lions were independents from 1881-1992, signing up with the Big Ten in 1993.

Going to have to agree with you, I’d say 15+ years on the list is where it should start.

15 years to last win a conference title in the SEc would include everyone save for ‘Bama, Auburn, LSU, Florida or Georgia. (Well, there is Mizzou, But they come from the hack Big 12 and as we all have been told ad nauseam Couch Carolina, Vandy, and Ole Miss would dominate all other leagues). Two bad they have been to the SEC title as many times as Florida and Georgia have since they left the Big 12. Tennessee???? Kentucky???

Mizzou with less than 6 years in the conference has been to the SEC title game in the last 15 years the same amount of times as South Carolina, Florida, Georgia and Tennessee.

Yeah, but everyone else in teh SEC would roll every other conference???? LOL