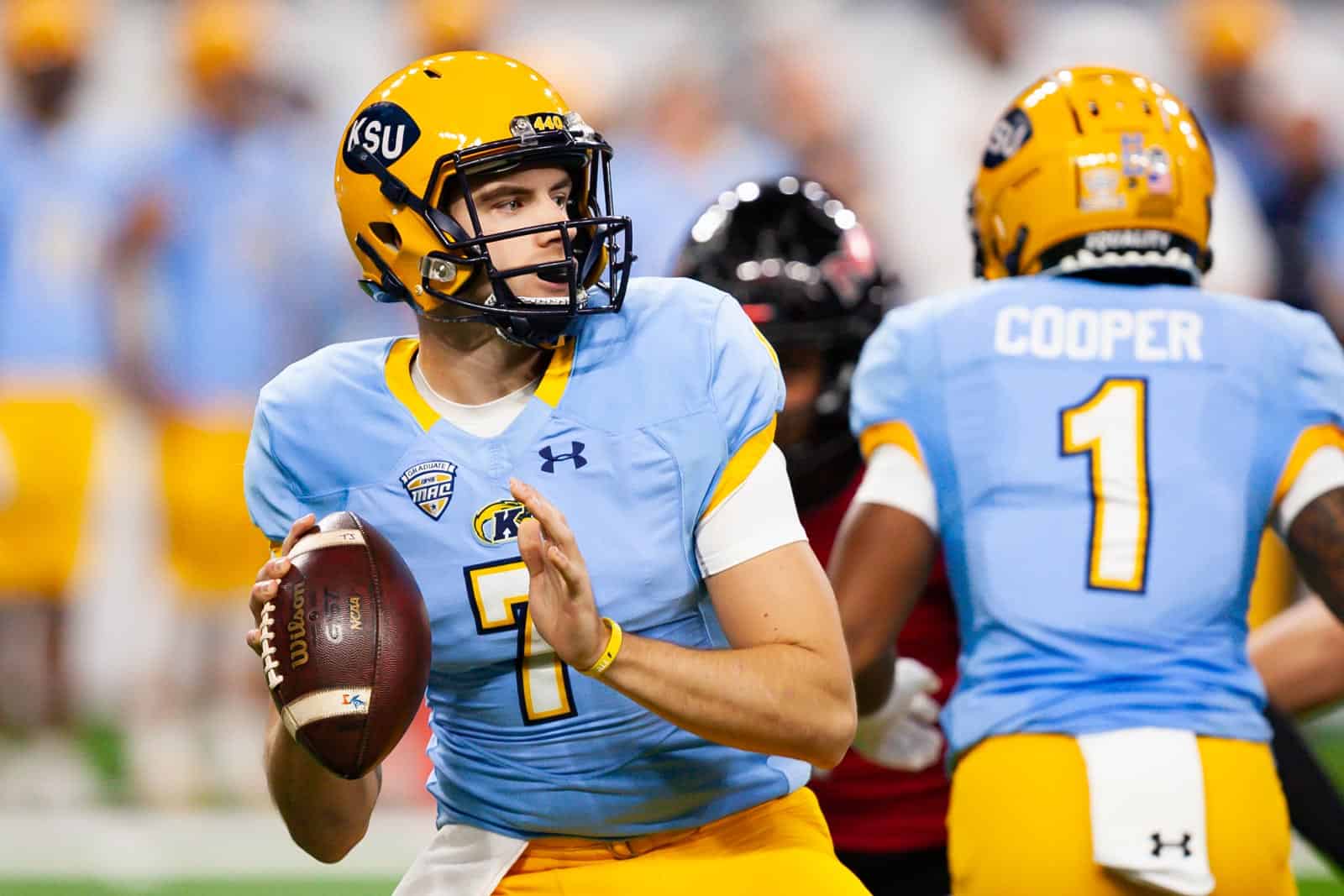 Of the 60 Group of Five members coming into the 2022 season 30 – or half of the field – are scheduled to play two Power 5 opponents in non-conference action. Of these, two – or three percent of the group – are set to face three Power foes.

It amounts to half of the Group of 5 having at least a one-game disadvantage over their counterparts who will play just one Power opponent.

By conference, the MAC and Mountain West lead the way with eight members apiece playing two Power foes, seven hail from the American, four from C-USA and three from the Sun Belt.

What follows are the most extreme cases, where G5 schools aren’t just doubling (and in two cases tripling) down, they’re coming in hot with a crazy combo of opponents.

The rankings – included only to further quantify schedule strength – are via ESPN’s Way-Too-Early Top 25.

The Bobcats double dipped on Power 5 opponents as recently as last season, opening with a home loss to Syracuse and then suffering another defeat at Northwestern later that same month. This year they up their game by playing two squads that while not ranked in ESPN’s Way-Too-Early sweepstakes, ought to be legitimate contenders in their respective conference races.

Ohio’s last win over a Power 5 squad came in 2017, a 42-30 home victory over Kansas, whom it also beat in Lawrence the previous season. It hasn’t played a ranked foe since 2016 and have never beaten a Top 25 opponent. Moving forward, it has two Power 5 programs booked in 2023 (Iowa State and Rutgers), 2024 (Syracuse and Kentucky) and 2025 (West Virginia and Illinois).

Since 2011 Louisiana Tech has booked two Power 5 opponents each season except for 2019. In 2012, it tripled-down with games at Illinois (a win for the Bulldogs), at Virginia (another win) and vs. (22) Texas A&M (a two-point loss) – putting the 9-3 finish into majestic perspective.

No stranger to coming big (and not staying home), this is the 12th consecutive season that the Broncos have doubled-up on Power foes, the climax coming in 2013 when they suffered a trio of road losses to Michigan State, Northwestern, and Iowa.

WMU took down a Power 5 member as recently as last season, scoring a thrilling 44-41 win at Pitt, a team that went on to win the ACC. It hasn’t beaten a ranked team since a 2015 win at (24) Toledo. The Broncos have three Power opponents scheduled for next season (Syracuse, Iowa, and Mississippi State) and two for both 2024 (Wisconsin and Ohio State) and 2025 (Michigan State and Illinois).

2022 non-conference schedule: FCS Saint Francis U., at (10) Michigan State, at Tennessee, at Liberty

Akron adds a roadie at Liberty, which is 26-11 since 2019, to its visits to East Lansing and Knoxville this season. Though that looks tough, it might be an upgrade from last year’s combo of games at Auburn and at Ohio State. Ouch! Though it scheduled two Power foes in 2017 and 2018, Akron played just one from 2019-20.

Straight from the Scheduling Hall of Fame (or Terror), Central Michigan has consecutively booked at least two Power 5 opponents since 2004. If that weren’t enough, in nine of the 19 seasons the Chippewa squared off with three Power foes.

First – you read that right, ESPN has NC State at No. 8 in its Way-Too-Early sweepstakes. Whether that will hold water or not, it amps up East Carolina’s non-conference schedule strength, as does BYU coming in inside the Top 20.

This is the first time ECU has booked two Power opponents since 2018, also the end of a run of 44 seasons (that began in 1974) of scheduling at least two such foes. Of these, the Pirates booked three Power clubs 14 times, four on nine occasions, five during ten seasons, six on four occasions and a whopping seven once – in 1987 (the Pirates’ independent status from 1977-96 made the five-plus seasons possible). It’s a stunning scheduling achievement that nobody knows about.

ECU last bested a Power club in 2018, scoring a 41-19 beatdown over North Carolina. Its most recent win over a ranked opponent came in 2014, a 28-21 victory at (17) Virginia Tech. Moving forward, the Pirates continue to take their foot off the gas with only two future slates featuring two Power foes: in 2027 (South Carolina and Wake Forest) and 2028 (NC State and Wake Forest).

While App State earns a demerit for scheduling two FCS foes, it makes up for it, maybe, with the seemingly insurmountable two-game combo vs. the Tar Heels and Aggies. The Mountaineers were slated to play two Power foes as recently as 2020, when they had Wake Forest and Wisconsin booked before the pandemic hit. They’ve doubled down on Power opponents five times since moving up to the FBS ranks in 2014.

App State’s most recent victory over a Power club came in 2019 when it scored wins not only at North Carolina (34-31) but at South Carolina as well (20-15). Its last victory over a ranked foe – and the only win over a Top 25 squad its secured since joining the FBS – was last season’s 30-27 triumph over (14) Coastal Carolina. The Mountaineers are the only program on our list with no future schedules featuring two Power opponents.

Though Cincinnati is not currently a Power 5 member, it presents just as much of a challenge as does almost any team from any league. And Miami gets to play the Bearcats every year for Ohio’s version of the Victory Bell. The Redhawks played two Power 5 members as recently as 2019 when it added roadies at (20) Iowa and (6) Ohio State to their annual clash with Cincy. Prior to that, it was 2013 when they last doubled down on such opponents.

Utah State played two Power 5 caliber foes as recently as last season, also the last time it beat a Power 5 member and took down a Top 25 team. Included in the 11-3 finish were a 26-23 win at Washington State in the season opener and a 46-13 beatdown of (19) San Diego State in the MWC title game. If you count BYU as a Power club – which we are taking the liberty of doing in this exercise – the Aggies have booked three Power opponents on three separate occasions since 2017.

2022 non-conference schedule: at Texas, FCS Nicholls, at (1) Alabama, at Army

Not only has ULM scheduled at least two Power foes consecutively since 2002, it takes it to the next level by booking heavy hitters, mostly from the SEC. During the 21-year run (which included eight seasons with three Power opponents and two with four), the Warhawks have played Auburn eight times, Arkansas seven times, LSU four times, Ole Miss on four occasions, Alabama three times (not including this year’s game), Florida State three times, Georgia three times, Texas A&M three times and Oklahoma twice. Holy scheduling department!

One of only two Group of 5 programs playing three Power foes this season, USF’s quest to post its first winning record since 2018 won’t be easy. The Bulls also played three Power opponents last year, losing at NC State, vs. (13) Florida and at (15) BYU. While they only had one Power foe booked coming in to the 2020 season, they had three scheduled in 2019 and two in 2018.

The winner (or, if you really think about it, loser) for the title of “toughest non-conference schedule in college football” belongs to Kent State whose trio of contenders literally is a Murderers’ Row. The bottom line is the Golden Flashes are playing at a three-game disadvantage vs. the rest of the FBS.

The Golden Flashes haven’t beaten a current Power 5 member since they knocked off (18) Rutgers in 2012, also their last win over a ranked foe. They have a trio of Power opponents booked again in 2024, this time roadies at Pitt, Tennessee, and Penn State.

The “Reward or Demerit” depending on which of these 5 non-Autonomous anti-trust conference Members gets a Win or Nowins VS these Auto-matic 5 Foes is that they “might” be ranked in the Top 25 for a Week or Two.

Dan-ke for the Historical Footnotes illustrating “How to make FB Revenue but keeping your Program in Stasis”.

I like that you are inadvertently illustrating the Abyss between The 5 Trust Fund Conferences & “The Help” Conferences.

Just because you believe the demarcation between P5 and G5 is unfair. does not mean it isn’t true.

App State was forced to add a second FCS opponent after Marshall went from being a non-con to a conference game. They had no time to do otherwise.

Can’t give them a demerit, especially since we know App State backs down from nobody. They’d go Power 5, if they could.

Thanks for that context. Adding an FBS foe at the last minute is just about impossible.

Power 5? You would have to upgrade the Highschool Stadium first, I have literally scene nicer stadiums at the highschool level

Boise State use to schedule 2 Power 5 conference teams but that is all over. They did have Michigan State scheduled at home in 2022 but that was cancelled and replaced by Martin-Tennessee. For the next 10 years the only Power 5 teams that Boise St. will play are Pac12 teams from neighboring Oregon and Washington . They do have a dose of Texas-El Paso , Rice. Georgia Southern and Marshall. Games with Cincinatti and Houston may be cancelled as those teams have joined the Big 12 and will likely dumb down their schedules as a result. Their appeal as a new member of a Power 5 conference seems to have waned. Too bad for a program that was so good a few years ago.

They just finished a series with Oklahoma State in which the Cowboys won up in Boise last year. I do remember when Boise would play at least one big one even as recent as a few years ago. If you look at their future schedule you will see they play a full one in 2024 with home game against Houston and Oregon State plus the roadie at Oregon. By that year Houston will be in the Big 12.

They dont do it this year but keep an eye on Tulsa’s football schedule the next 3 seasons. This year they play a few small teams then go to Ole Miss. Next year however they go to Washington then the very next week host Oklahoma. Then they will play Oklahoma State and Arkansas in the same seasons for 2 years straight. They have been playing one huge team a year for the past 5 seasons with last year having back to back weeks against OSU teams. They played at Stillwater against Oklahoma State then the next week at Ohio State. In the past they would go to Texas, Michigan State, Ohio State (twice), Oklahoma, Iowa State, Notre Dame, and Minnesota to name a few. Pretty good for one of the smallest schools in Division1 ( 5,000 students) who plays football.

Tulsa hasn’t won a game against the Power-5 (0-13) since the term was created. I wouldn’t be surprised if this behavior continues for the 3 seasons. The point is to win – not schedule.