For Whom the Bell Tolls: The 9 bells associated with FBS college football rivalries 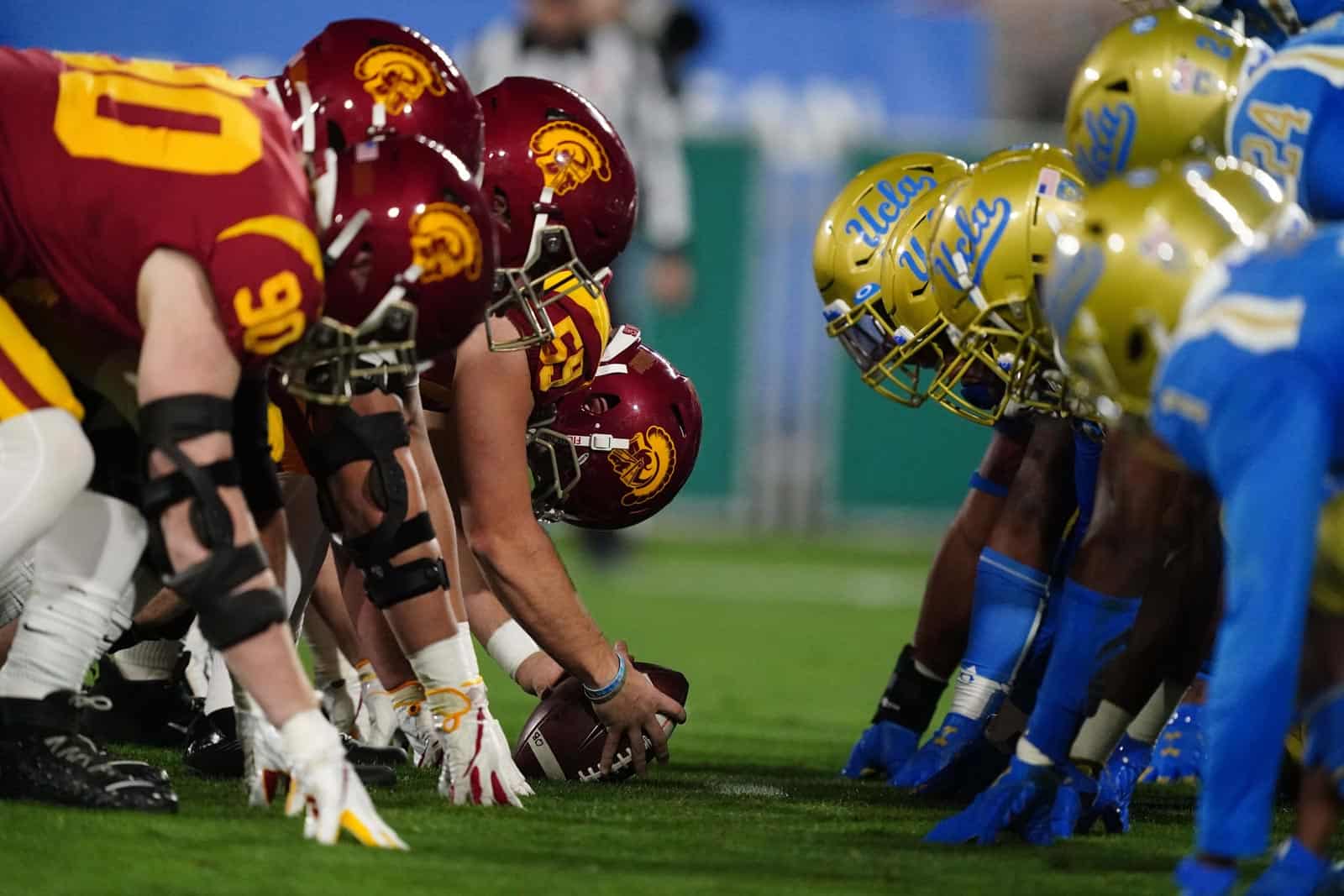 Of the multitude of rivalry trophies up for grabs in the FBS the second most common is a type of bell. Whether it’s the simplicity of it, it’s universal availability or the fact that it can be used as a device to promote spirit – the bell leads the way over every other prize apart from a named “Cup” which is linked to 11 rivalries.

As is the case with so many college football traditions, the Bells of the FBS have legendary backstories that you simply can’t make up.

The original traveling prize for Bedlam was the clapper from the bell that hung in Old Central on the Oklahoma State campus. The first time the Cowboys (originally the Oklahoma A&M Aggies) ever beat the Sooners, in 1917, the bell was rung all night. The clapper was absconded by OU fans after another OSU victory in 1932 and then changed hands until 1966, when the two schools agreed to use it as a trophy. It has since been replaced by a crystal bell that sits atop a base. In 2014, the Bedlam series began awarding a trophy that features 80 pounds of Oklahoma granite, a prize which many enthusiasts hope to phase out.

Though the series is over 100-years old, this “Battle for the Bell” only dates to 1997, when Marshall moved up to the FBS ranks. The two schools are located a mere 80-miles apart, separated by the Ohio River, making it natural that their version of a rivalry Bell would commemorate the bells once used by riverboats in the area. The two met consecutively from 1997-2004 as members of the MAC before taking a break when Marshall moved to Conference USA in 2005. After reuniting in the 2009 Little Caesar’s Bowl, they met annually from 2010-15 and then had a home-and-home series booked for 2019/20, the last half of which was lost to the pandemic.

Southern Miss and Tulane’s version of the Battle for the Bell kicked off in 1999, four seasons into their shared membership in Conference USA. The two schools – located only 110 miles apart – played each other consecutively from 1979-95 as Independents and then from 1996-2006 as league members. The two have only clashed twice since Tulane left for the American Athletic in 2014 – the 2019/20 Armed Forces Bowl and most recently during the 2020 regular season – both wins for the Green Wave. The Bell itself is three-feet tall and features each school’s logo.

The last time Georgia Tech and Vanderbilt met, in 2016, neither team had a clue that the matchup, once a rivalry, had its own traveling trophy. That is until a Georgia Tech administrator went looking for printer toner and found the once coveted prize in an old filing cabinet. The Cowbell was purchased in 1924 by Ed F. Cavaleri, a Yellow Jacket fan, on the way to the game to be used as a noise maker. After Georgia Tech lost, Cavaleri presented the Cowbell to the Commodores, marking the first of 27 times he would faithfully present his purchase to the victor. Georgia Tech left the SEC to declare its independence in 1964 (it didn’t join the ACC until 1983) and the rivalry fizzled out. Cavaleri presented the Cowbell for the last time in 1967. The two have only met four times since.

Series details: first played in 1993 – Penn State leads 9-6 but the two have split the last four.

Established by the governors of the states of Minnesota and Pennsylvania in 1993, this version of a rivalry bell was unveiled for the first-ever game between the two schools, on Sept. 4, 1993, also the inaugural Big Ten contest for Penn State. After dropping four straight games to the Nittany Lions from 2005-10, the Golden Gophers’ celebrated their 24-10 win in 2013 with such unbridled gusto that they unfortunately broke the Bell.

According to legend, the original version of Cincinnati and Miami’s Victory Bell was taken from Miami’s campus in Oxford, Ohio (where it was rung to celebrate Redhawk victories) by Cincinnati fans in the 1890s establishing the tradition of the winning team retaining the bell. Today, the original Bell is back on display at Miami with a replica awarded to the winner of the annual game. The traveling Bell records Cincinnati victories on one side and Miami wins on the other. The two campuses are located a mere 30 miles apart.

Duke and North Carolina’s version of the Victory Bell was established in 1948 by a cheerleader from each program to “foster friendly relations and eliminate vandalism between the two neighboring schools.” Originally, the winning team also earned the right to paint the cart which holds the Bell their unique shade of blue. This lasted until 2014, when the Tar Heels took the Bell back from the Blue Devils after a 45-20 win in Durham and painted not only the cart Carolina blue but slathered the hue all over the visitor’s locker room at Wallace Wade as well as Duke’s practice field. The cart is now permanently painted to honor both schools.

USC and UCLA’s Victory Bell dates to 1939 when the UCLA Alumni Association gave the bell, a massive 295-pounder off a locomotive, to its alma mater. The Bruins rang the bell after each football point for two seasons until 1941, when members of a USC fraternity disguised as UCLA fans, stole the bell during the season opener. After a series of shenanigans, the two schools signed an agreement before the 1942 game to award the bell to the winner of the cross-town rivalry. As was originally the case in North Carolina and Duke’s Victory Bell, the recipient earns the privilege of painting the bell’s carriage its school colors.

Though the Tigers and Cornhuskers’ Victory Bell was taken from a church in Seward, Nebraska in 1892 by a pair of fraternities, it didn’t begin its life as a traveling rivalry trophy until 1927. The two programs clashed consecutively from then until 2010, when Nebraska left the Big 12 for the Big Ten. The Cornhuskers won the final game 31-17 in Lincoln, giving them ownership of the Bell until, one fine day, the two finally reunite on the gridiron.

That’s a lotta bells! As a Cincinnati fan, I wrongly assumed our victory bell was the only one. Great write up.