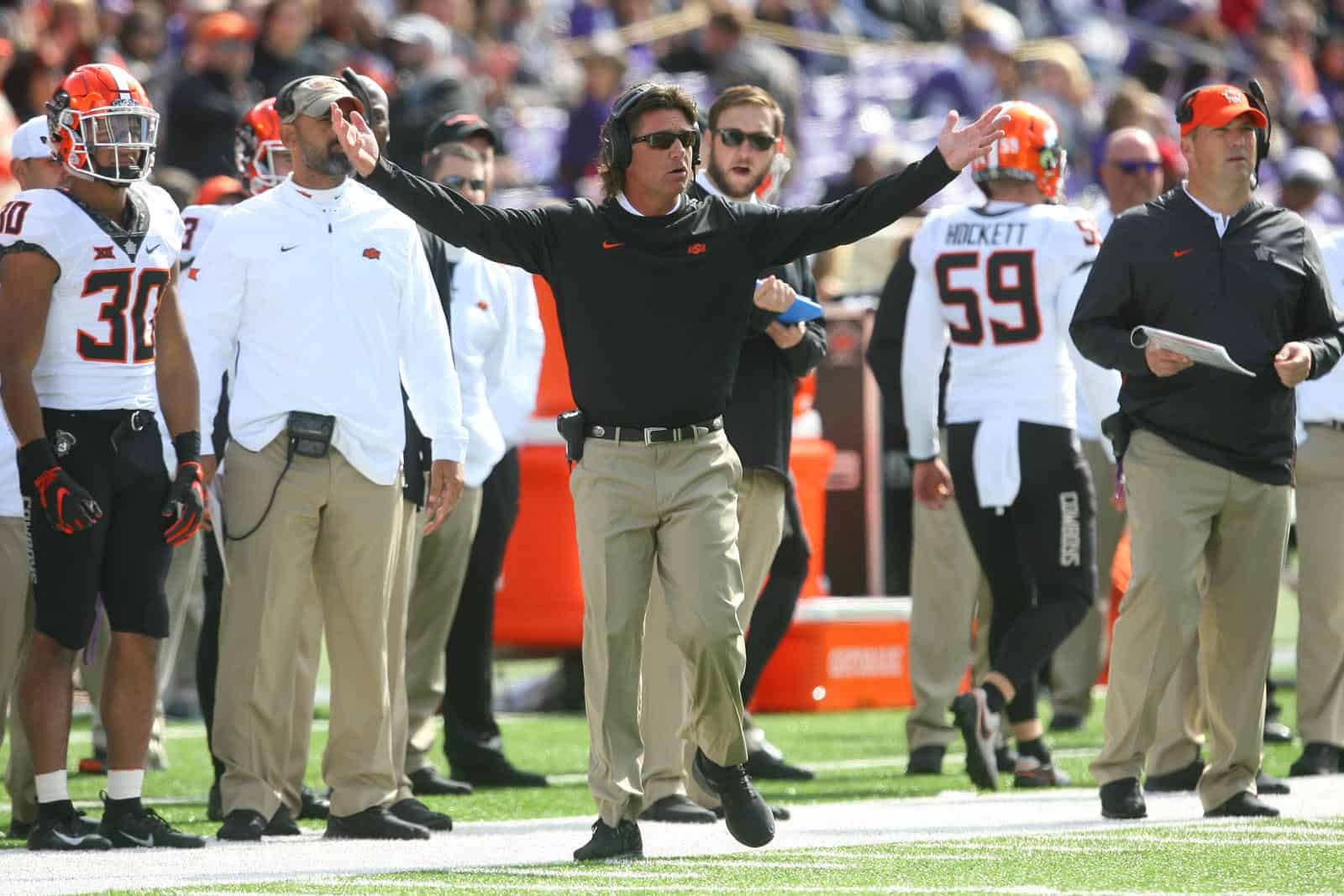 Of the approximately 1,560 regular-season games scheduled for 2019 at the FBS level only 45 – or three percent – feature two FBS programs which have never met before on the football field.

Each – regardless of how attractive it is to a wider audience – is a piece of college football history.

Not only is this matchup one of just two first-time meetings in 2019 featuring two Power 5 programs, it’s the first-ever clash between the only two FBS programs with an orange-and-black color scheme.

The Cowboys and Beavers are slated to play the back end of their home-and-home next season in Stillwater.

While this one might not look overtly attractive on the surface, tune in to see Tulsa’s offense – led by head coach Philip Montgomery (who was Art Briles’ offensive coordinator at Houston and Baylor) – take on Michigan State’s always-stingy D.

The Spartans haven’t played a current American member since downing South Florida during the 2013 regular season. Tulsa hasn’t clashed with a Big Ten program since getting whacked 48-3 at (4) Ohio State in 2016. Its only-ever win vs. the Big Ten came in 1996 when it upset (19) Iowa 27-20 in Tulsa.

Though not a Power 5 vs. Power 5 affair, this sets up as one of the better non-conference matchups of 2019. The Broncos – fresh off a 10-3 performance – will no doubt lay it all on the line against the Seminoles, their only true Power 5 opponent this season (they also get BYU on Oct. 19). It’s their sole opportunity to make a big statement. As for Florida State, after suffering its first losing campaign since 1976, it needs to make a declaration of its own.

The Seminoles last played a Mountain West member in 2013, destroying Nevada 62-7 in Tallahassee. Boise State played an ACC program as recently as 2017, falling to Virginia 42-23 at home.

The two schools are also slated to meet in Boise next season.

The Longhorns open 2019 with back-to-back visits from Louisiana Tech and LSU. While the Bulldogs’ are the far less threating of the two opponents from the Pelican State, Texas must be diligent in not overlooking the smaller school. La Tech is 42-25 since 2014, a run that includes five straight bowl wins. It’s also given other big boys a run for their money, pushing then (6) LSU to a 38-21 decision in Baton Rouge last season and falling just short in a series of almost-upsets over the last several years – a 17-16 loss at South Carolina in 2017, a 21-20 defeat at Arkansas in 2016 and a 39-33 loss at Kansas State in 2015.

A true David vs. Goliath scenario, this matchup also features FAU head coach Lane Kiffin strolling into Ohio Stadium on opening day and taking on the Buckeye’s newly crowned head man Ryan Day. Kiffin hasn’t beaten a Power 5 team as a head coach since Sept. 14, 2013 when, at USC, he led the Trojans to a 35-7 win over Boston College. He hasn’t beaten a ranked team since Nov. 19, 2011 when he led USC to a 38-35 win at (4) Oregon.

Independent BYU is Tennessee’s only “Power” opponent in 2019 and the Volunteers are one of only four such foes for the Cougars this season. It makes this matchup key for both schools, especially for Tennessee which is looking to rebound from back-to-back losing campaigns.

The Volunteers played an independent program as recently as 2017 when they hosted UMass and won 17-13. 2017 is also when BYU doubled-up on SEC opponents – losing to (13) LSU on Sept. 2 and again at Mississippi State on Oct. 14. The Cougars beat MSU the previous year, a 28-21 victory in Provo.

BYU and Tennessee also have a date booked in 2023.

While this one may not have “blockbuster” written all over it, it’s the second of only two first-ever meetings featuring two Power 5 members in 2019. It will also mark the first time Kansas’ new head coach – Les Miles – has led a team against a Power opponent since Sept. 24, 2016 when he guided LSU to a 18-13 loss at unranked Auburn. He was fired the next day.

The two schools will meet again in Lawrence next year.

New Mexico plays instate independent New Mexico State on an annual basis, winning the last meeting and five of the last seven. Notre Dame has never lost to a Mountain West team that wasn’t Air Force. It’s 23-6 vs. the Falcons and 6-0 vs. the rest of the field, most recently downing Nevada 39-10 in South Bend in 2016.

This first-ever meeting is between two schools from the same state located a mere 160 miles apart. What’s facilitated the long wait is that after fielding a team from 1930-40, ODU disbanded its football operations until 2009. Further delaying the first dance was that the Monarchs played as an FCS program until 2014 when they moved up to the FBS via C-USA.

The Cavaliers and Monarch are also scheduled to meet in 2020 and 2022.

After posting a 15-10 record at Temple from 2017-18, Geoff Collins got the nod for the head job at Georgia Tech at the end of last season. In Week 5, he’ll travel back from whence he just came and lead the Yellow Jackets vs. the Owls for the first-time in history.

Georgia Tech played an American member as recently as last season, when it visited South Florida and lost 49-38. It last won such a game in 2015 when it zapped Tulane 65-10. Temple played two ACC opponents in 2018, suffering losses at Boston College and vs. Duke in the Independence Bowl. Its most recent win over a program that was an ACC member at game time was in 2011 when it visited Maryland and won 38-7.

The Yellow Jackets and Owls also have plans to meet in 2025.

With Lane Kiffin, that should read as his last *non-conference* Power 5 win. He certainly had later Power 5 wins in conference while at USC.

Actually that *was* his last P5 win. Their next game was Utah St(W), then got fired after losing at ASU. He’s lost both (Wisconsin, Oklahoma) at FAU

Outside of Okie Lite and Oregon State who else has an orange and black color scheme in FBS?

Did I miss any orange FBS schools?

Actually, no. SC’s next game was a win over Utah State, lost to ASU and got fired, and has lost his two at FAU.