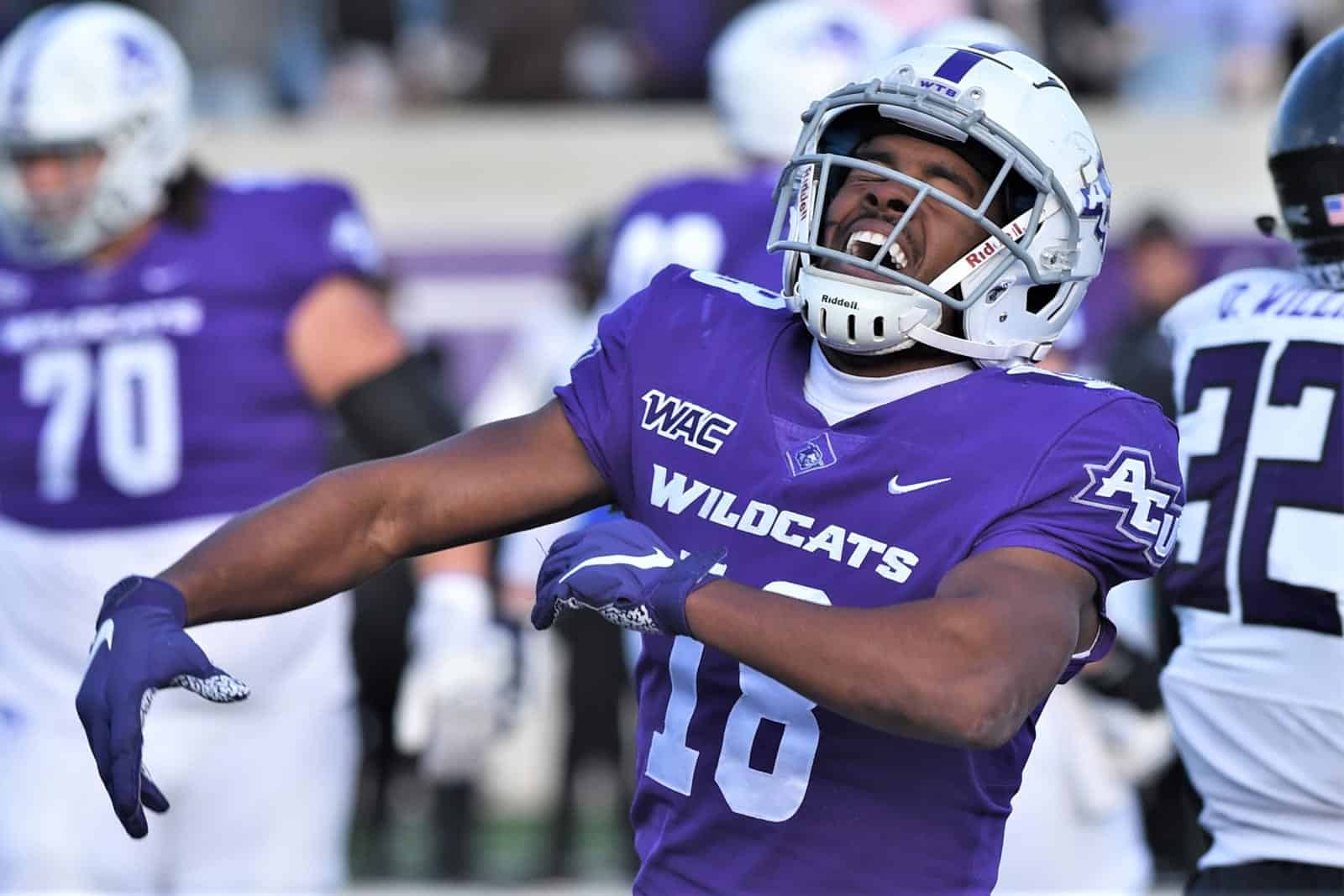 Ten Football Championship Subdivision (FCS) schools are planning to create a football-only conference and move up to the Football Bowl Subdivision (FBS), according to an ESPN report.

According to the report, the remaining football members of the ASUN Conference and the Western Athletic Conference (WAC) have each signed an agreement to form a new league. The schools include four from the ASUN — Austin Peay, Eastern Kentucky, Central Arkansas, and North Alabama — and five from the WAC — Stephen F. Austin, Abilene Christian, Utah Tech, Southern Utah, and Tarleton State.

The 10th school, the University of Texas at Rio Grande Valley (UTRGV), doesn’t currently sponsor football, but plans to begin their program in 2025 and compete in the WAC.

The 10-team league plans to transition to the FBS level “at the earliest practicable date,” per documents obtained by ESPN. A transition from FCS to FBS is usually a two-year process, per NCAA rules.

More from the ESPN report:

The league hasn’t picked a name but has narrowed the options. In the founding documents, it’s referred to as “ASUN-WAC Football,” which won’t be the name moving forward.

The programs from the two conferences are familiar with each other after partnering in 2021 and 2022 to gain automatic qualification for the FCS playoff.

The reasoning for the new league is, according to sources, “greater certainty in scheduling and recruiting” and a clear pathway to the highest levels of college football. Also, the schools expect increased revenue through a more lucrative broadcast contract and increased guarantee-game revenue because the games would count toward bowl eligibility if they became an FBS league.

The report comes on the heels of a major round of conference realignment last year that resulted in four FCS programs announcing moves to the FBS level. James Madison moved up and began play in the Sun Belt Conference this season.

Jacksonville State and Sam Houston are slated to move up to the FBS level on July 1, 2023, followed by Kennesaw State one year later on July 1, 2024. All three teams will compete in Conference USA.

This is ridiculous…. These schools along with about 10 others have no reason to be in FBS. And then they’ll complain when Power 5 breaks away. 140 schools is way too many for FBS

FBS will never stop growing. At the same time, the existing FBS conferences may not be done with realignment. If the Big 12 decides to add more schools for 2025, it would start a ripple effect that may bring at least some of the schools in this article into existing FBS conferences. A proposal for the Sun Belt to add Eastern Kentucky and Stephen F. Austin would not be directly part of this ripple effect, since they would be retaining their 14 existing schools and going to 16 with the aim of scheduling the following games on Thanksgiving week: Appalachian State-Coastal Carolina, Arkansas State-Southern Miss, Eastern Kentucky-Marshall, Georgia Southern-Georgia State, James Madison-Old Dominion, Louisiana-ULM, South Alabama-Troy, and Stephen F. Austin-Texas State.

Do Southern Utah, Utah Tech, Northern Alabama, and Tarleton State really think they’re FBS ready?
The others I can kind of understand, but you’re right, this is ridiculous.

This could be rendered irrelevant if existing FBS conferences decide to poach more schools.

Eastern Kentucky and Stephen F. Austin should join the Sun Belt, while the remaining ASUN schools in this group could join C-USA if it loses FIU and Middle Tennessee to the American if that conference were to lose Memphis, SMU, South Florida, Temple, and Tulane to the Big 12 (McNeese from the Southland would also join C-USA to even that league out at 12 full members).

Sad, really…money destroying College football. I am not naive. I saw this coming. I just hoped that the FBS, with their high broadcast revenue, would not affect small-ball, hometown, and regional amateur athletes.
An accumulation of other factors also forecast this evolution. N-I-L, the Portal, streaming service technology, and one and done professional athletes.
I am not against elite athletes earning a living. I just want amateur student-athletes to have an opportunity, more so than taxpayer subsidies for professional teams’ farm league.
The NCAA is weak and/or greedy. I thought their best interest was supporting the student-athletes. I realize high revenue basketball and football support other amateur athletics on campus, but as H2P said “This is ridiculous”.
This system will go bust after 6, 7, 8 years of upheaval, with empty, oversized stadiums and arenas. SAD…really

I blame the NFL:
-for not creating a development league
-for forcing players to be 3 years removed from high school

It’s because of these policies that college sports is what it is.

You might as well let go of the idea that empty stadiums matter in the new model.

In this case, game content that is considered at the FBS level that can be sold to cable/streaming providers. This means you can have your schools line up with similar schools, sell the rights to broadcast these games and then sell the content again and again forever. They don’t care who bought tickets to the game, they are going to make that money and more over the next 100 years.

Now, you may say, no one cares about Tarleton State and Eastern Kentucky football, relatively speaking of course. I get it. But, what you have to take into account is a cable/streaming provider who desperately needs content and is willing to pay for that content. Look at any streaming provider today. There are tens of thousands of films listed in their libraries that most people will never watch. But they have to have content to sell to a subscriber. Sure, it’s going to be the Marvel stuff (Disney), Stranger Things (Netflix) and those sorts of shows that bring in the subscribers… but if those subscribers went to Netflix and their only option was to watch Stranger Things, the customer is going to feel they aren’t getting good value for their money.

BUT, if they have stranger things and 700 movies I’ll never watch but I MIGHT watch sometime, it’s worth it.

Same with these football packages. We might not ever watch it, but it’s there and because it’s there they can sell subscribers a package for a little more money and drive them to all of their advertising.

We’re in a new time… I can sell a ticket once. I can sell rights forever.

My crystal ball predicts the SEC, Big Ten and a 3rd combined league with a name to be decided later will break away from D1 and have its football only version of the premier league.

There has been a couple of seasons in the recent past where the “Group of Five” would have a team/teams worth watching that could cause headaches for top-drawer “Power Five” teams. 2022 has not been that year for the most part. The divide is becoming greater between the P5 and G5 in terms of watchability.

I’m all for any athletic program that would want to move up to P5, if they are willing to put $$$ into the program to do so. Louisville ponied up and got into the ACC. Same with Houston, Cincinnati and UCF to the Big XII.

Most (not all) G5 programs have an average attendance of under 20,000 per game. This will also hold true for teams of this new “conference” and C-USA’s recent additions to their conference. These are trends that are consistent for decades with many of these programs.

So WAC-ASUN, enjoy your cash grab while it lasts. Nonsense like this will cause the Power Five schools to breakaway sooner than later and leave Group of Five schools as their own division.

WKU & MTSU to the MAC.
…
Then these folks can just merge with the CUSA Football remainders to create a Continental Football Conference.

We’ll see. WKU & MTSU may have missed their window of opportunity to join the MAC though.

Gotta laugh! I grew up in the baby boom when the high school population of high school football players vastly outnumbers the amount of football playing kids today. Schools where I grew up in the northeast have half the student populations of today. Soccer was being played by a very small percentage of kids. Demographics have changed. Many immigrant families of Asian and Hispanic descent don’t play team sports, no less football. A lot of parents are keeping kids out of football because of CTE. The pool of football players is not increasing. It’s declining. Look at the scores today of FBS vs FCS programs. They’re generally blow-outs. A lot at the FBS level as well alone. Point is there is not enough talent to maintain equivalent competition among the 131 FBS schools played last season. So, let’s keep adding more teams? Do they really think there’s going to be more TV revenue to be distributed among more less competitive teams. How many more “bowl games” does TV need for more revenue? It’s all about grasping at straws for schools to make more money. It’s not ‘about the kids” anymore. Real college football is being driven down to the D3 level where kids play for the sake of playing four years of college football where people are not tuning in. It’s not about the money. It should be about life’s lessons playing football for all those kids who will never become pro athletes. Instead, just good employees, leaders, parents, role models, and citizens, hopefully.

If allowed, this will crash the guarantee game market, meaning more profit for the majors at the expense of the smaller programs.

IN TEN YEARS STADIUMS WILL BE EMPTY,SPORTS WON’T NEED FANS YOU’LL BE HOOKED TO YOUR FUTURISTIC TV AT HOME WATCHING IT IN 4 D,PAYING 1500 A MONTH,ACTUALLY THAT’S CHEAP,SO MORE PEOPLE OUT OF WORK BIG STADIUMS WILL BE CONVERTED TO TOP OF THE LINE ”THE REAL BIG HOUSE” FOR HIGH END CRIMINALS.GAMES WILL BE PLAYED AT PRIVATE CONCEAL AREAS NOT EVEN THE PLAYERS WILL KNOW,IT’S THE FUTURE SO SIT BACK AND ENJOY

Oh yeah? I’m not sure if this is real,but I don’t have to win this game.