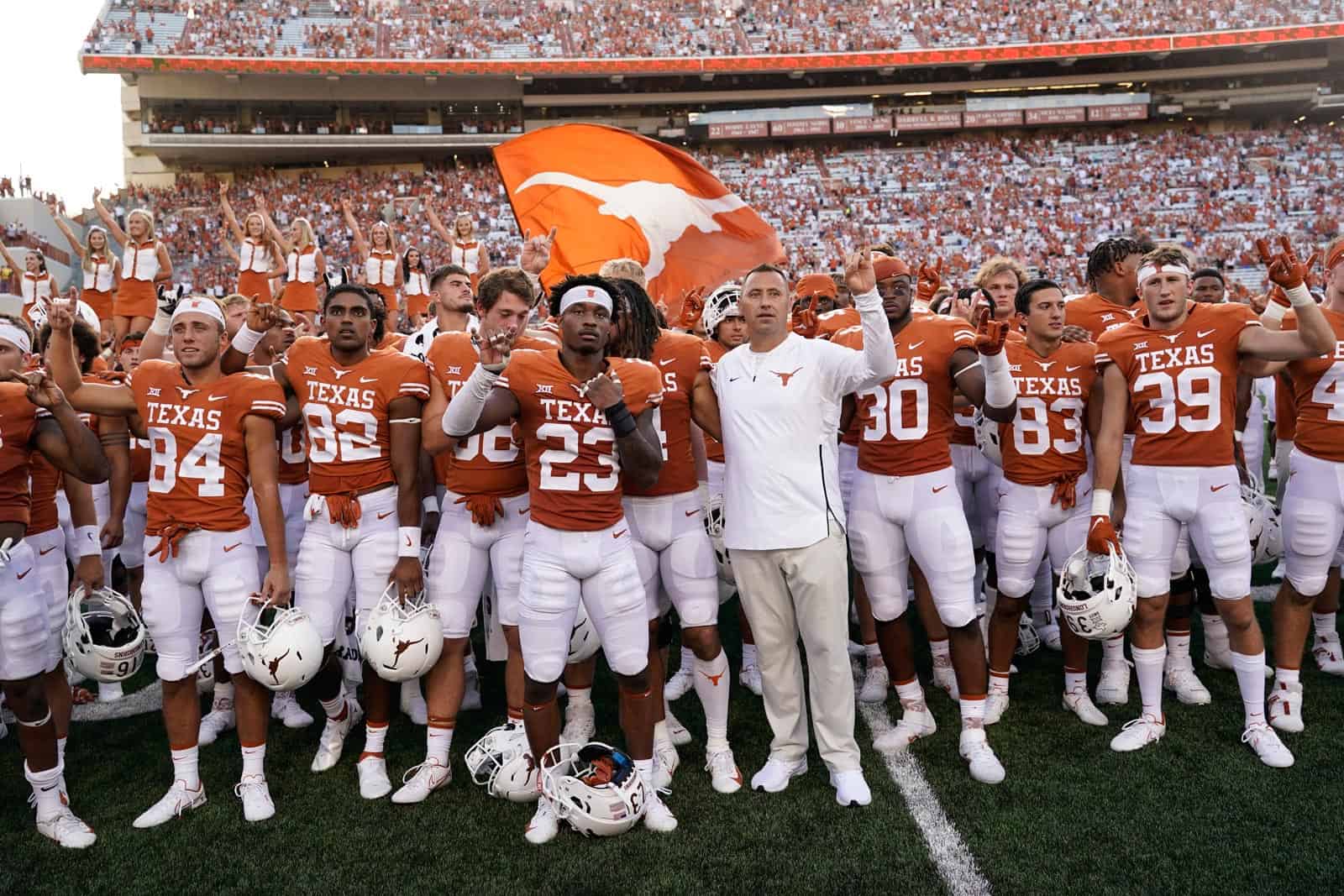 College football conference realignment and expansion has returned in 2021, with several conferences set to add members while other teams will move to different leagues.

We’ve created a College Football Realignment Tracker to list all of the changes in one place. Most of these changes, if not all, will become official on July 1, 2023.

The ACC has survived this round of conference realignment, so far.

All six schools that are joining the American are moving from Conference USA.

BYU joins after playing as an FBS Independent, while Cincinnati, Houston, and UCF move from the American Athletic Conference.

Like the ACC, the Big Ten appears to be holding at 14 members.

The six schools leaving Conference USA will each join the American. Liberty and New Mexico State are currently FBS Independents, while Jacksonville State (ASUN) and Sam Houston (WAC) will move up from the FCS.

Middle Tennessee and WKU have been rumored to make a move to the MAC.

BYU is leaving for the Big 12, while Liberty and New Mexico State will join Conference USA.

Middle Tennessee and WKU have been rumored to make a move to the MAC.

Air Force and Colorado State considered a move to the American, but decided to remain in the Mountain West.

Not much has been rumored for the Pac-12. If there were some movement into the conference, it would likely be the best teams from the Mountain West such as Boise State and San Diego State.

Arguably the top conference in college football gets better with the addition of Oklahoma and Texas from the Big 12, likely in 2025 unless lawyers get involved. The question now is, does the conference keep their divisions, scrap the divisions, or go to four-team pods?

Is it possible to get graphic of this for the fbs? Good comprehensive info.

All this lateral movement by the American, & C-USA to stay afloat in the 1A Pond & the Sunbelt’s opportunity to Raid C-USA before they can recover doesn’t gain any of these Conferences Traction VS the Autonomous Five Conference’s Trust: controlling Legal standing, REVENUE, Reputation, & Social Standing.

1A Football will only expand as a preferred Sport in the 1A University sports Market by having their own Governing, growing, revenue expanding, merit focused League. Separate from all other Division 1 Non football sports, especially men’s Basketball.
130 growing 1A programs under 1 mutually administered Association. #National College Football Association built on the researched, financed Model presented by the knightfoundation.org . National #College #Football Association.

Thanks for this. It was getting a little tough to keep track of! I saw some other rumors about possible jumps from FCS to C-USA a while back (that included SHSU and NMSU but others beyond just Liberty and Jacksonville St), so I’m curious to see if that will play out.

Also will be interesting to see if there will be any more movement with the Big 12 or other P5 conferences, since that would likely shake up all the lower conferences.

One note: I see you’ve listed all the new lineups as the “2023” version… which seems like it may reasonably be the case, but there are definitely some of these moves (not the least of which is the one that kicked this all other, the Texas and Oklahoma to the SEC) for which 2023 is not currently the official date, right?

Doesn’t this list show Oklahoma and Texas leaving BIG12 and joining the SEC in 2025?

Under Big 12, Texas and OU should be listed under 2023 Lineup. They should not be listed on the SEC 2023 Lineup at this moment in time. It is widely believe that they will leave B12 early. However, officially they have stated they won’t be leaving until 2025

^ Which is why the XII held off expanding to 14 not counting UT and OU.
.
Otherwise Memphis would have already been invited. Although whether the Boise bullet will be bitten by the Big XII is the question. But the merry go round will continue….
.
McNeese is going to be in CUSA next, as soon as the MAC grabs WKU/MTSU.

It was stated at the top that most of the changes would take place July 1, 2023, not all. But I’ll add clarification for them.

Truth is… I honestly wonder if Boise State would be the right move for the Big 12…? I mean, I get it… they need to have members that have done something recently in football, and in that respect Boise State is a pretty good call. AND they help make it so BYU isn’t quite out on an island as they are. Still, in my personal opinion, there are 4 east schools and 4 west schools that would be in the running for further Big 12 expansion (based on THIS lineup… if anyone else leaves, that might change the the way I figure it out). My thought is that they could go with 1 east and 1 west to help try to give UCF and BYU travel partners (though some of my options are admittedly not SUPER close)… or 2 east and 2 west if they’re up for going to 16 members. (3 east/1 west or 3 west, 1 east have crossed my mind as well, but that just adds a layer of complication to all this).

West options include:
Colorado State (which is maybe one of the safer choices since it’s a reasonably big school and helps tie the conference map together the best)
Boise State (which has the weight of being one of the “best of the rest” type teams that could help bring on-the-field respect, but is fairly small, in a fairly small market)
UNLV (which hasn’t been good in a long time, but is also a larger school AND a larger market… and basically is as close to BYU as Boise State is… plus helps tie the geography together for…)
SDSU (which would be one of the boldest calls that the Big 12 could make at this point, reaching out into a BIG city in a BIG state)

On the east side I’d look at:
– USF (which had a bit of a run for a very short period in the Big East, but helps UCF out because honestly there aren’t any other schools within 650 driving miles of them that I’d consider. they’re also a large school with more students/alumni and in a more populated metro area)
– Tulane (which is the school just over 650 driving miles from them that I’d consider, but that doesn’t bring much at this point outside of, hopefuly, New Orleans and Louisiana interest… some non-football sports, but that’s not what realignment is about generally)
– Memphis (the obvious choice and probably the only 1 that gets in if you’re taking 1 from the east, but geography-wise, they’re going to be in no man’s land more than anyone aside from UCF and BYU)
– Navy (??? I mean, ok, that’s a reach for all sorts of reasons, but truth is, short of prying someone out of a Power 5 conference, they’re the only other eastern team I’d look at right now. The other options need to simmer and develop a bit more)

So yeah, if the Big 12 wants to go to 14, Memphis is in… and honestly, I’d lean Colorado State over Boise State, but I’d understand why Boise would be considered. If the Big 12 wants to go to 16? I’d probably go USF/Memphis/UNLV/SDSU or mayyyyybe Memphis/Boise/UNLV/SDSU. Boise has the wins… but BYU, UCF, Cincy, and Houston were brought in for wins AND TV market and the number of students/alumni.

The Big XII will stay at 12 until Kansas and/or Oklahoma State leave. They are not going to add schools like Memphis or Boise unless they lose others. A league of 14 schools is a mess. You either stay at 12 or go to 16 and right now there are not any good adds. Boise is a terrible fit for the Big XII.

I’ve gravitated towards the Sun Belt adding Eastern Kentucky and Stephen F. Austin. The latter’s big rival, Sam Houston, is moving up to FBS too, and SFA going FBS would enable the game to continue out-of-conference.

It would also enable this as the Sun Belt’s Thanksgiving weekend schedule:

The Eastern time teams would form the East Division, and the Central time teams the West. The additions of EKU and SFA will be made possible by the expulsion of Little Rock and UT Arlington, who don’t sponsor football.

Southern Illinois and Youngstown State could also move up to the MAC.

The remaining Midwestern scholarship football programs in FCS could reorganize as an all-sports conference, continuing the Missouri Valley Conference legacy after the private schools in the MVC (none of which sponsor scholarship football) withdraw to form their own conference, the MVC would add all Summit League schools that play football in the MVFC, plus Eastern Illinois and Southeast Missouri from the OVC, and Augustana from the D2 NSIC, which has plans to go D1.

I also prefer if the MAC don’t add MTSU and WKU, rather alongside SIU and YSU, Cleveland State and Robert Morris join as full, non-football members, and Fordham and Richmond join for football only.

Didn’t UMass already do that once and quit? Looks like they were in from 2012-2015. I’m not sure if all the factors, but it seems like they now have plenty of chance to compare MAC membership with Indy status.

UMass and UConn are both terrible now. They would both finish at or near the bottom in the MAC. UCF was in the MAC for one year, went 0-12. Temple was in the MAC for awhile after getting booted from the Big East. Ditto with UConn in C-USA. They could try to be competitive in the MAC for a decade then move on if the MAC no longer served their needs. UMass has lost to Rhode Island and New Hampshire and UConn only win is over Yale or Colgate?.

Got to love the idiocy here! As all these football morons fail to take into account that the OTHER sports are also affected by realignment, even moreso than football!

Rest of my predictions

Excellent job on breaking everything down. This is truly appreciated.