Will the Big Ten’s schedule changes cost it a future CFB Playoff spot? 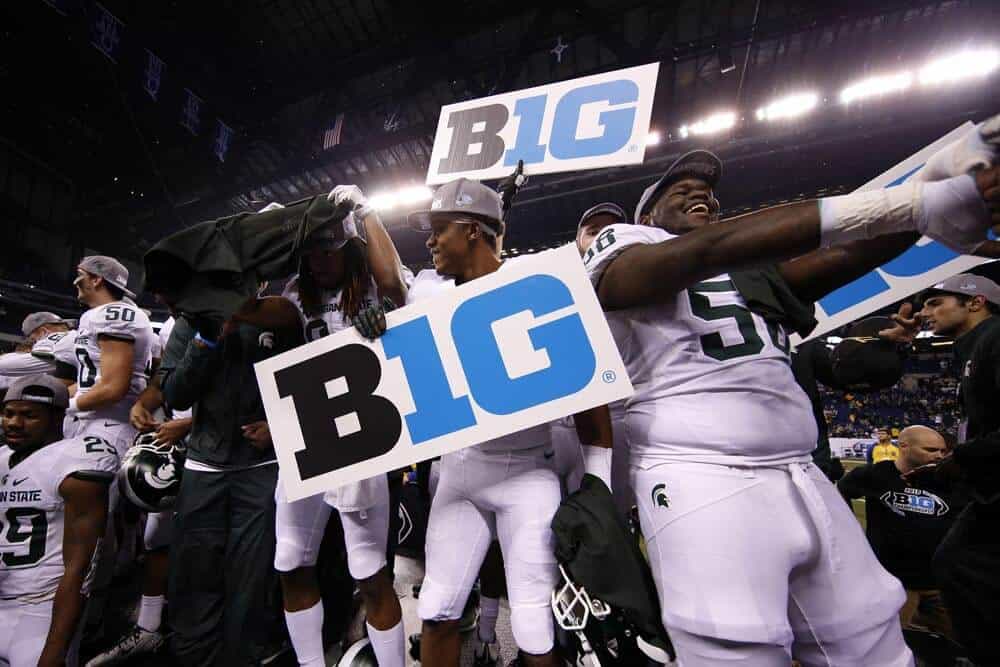 One of the more significant, yet underplayed changes that took place during the 2016 college football season was the expansion of the Big Ten’s league schedule.

The increase from eight to nine conference games put the Big Ten in step with the Big 12 and Pac-12, but out of sync with the ACC and SEC; both of which have retained an eight-game format.

The expansion was achieved by dropping one non-conference foe and adding an additional cross-division opponent. So, where in 2015 (and previously) members played four non-Big Ten schools, six divisional opponents and two from the opposite division (four, six and two) – in 2016 it was three, six and three.

Of the three non-conference opponents remaining on each slate – one is required to be played against a Power school. That means, effectively, that the additional cross-division matchup replaces a non-Power opponent hailing from the American, C-USA, MAC, Mountain West or Sun Belt.

It also means that each program now faces 10 Power opponents as opposed to nine. It’s a big change.

Cross-divisional from the West (2): Minnesota and Illinois

Cross-divisional from the West (3): Wisconsin, Northwestern, and Nebraska

Effectively, Ohio State dropped Western Michigan from 2015 and replaced it with Nebraska in 2016. Think about that for a moment – the Buckeyes swapped out a game with a MAC team for a Big Ten opponent.

Cross-divisional from the West (3): Nebraska, Iowa, and Illinois

So, instead of playing an additional non-conference game vs. the MAC, or Mountain West, or C-USA – Ohio State adds Illinois.

Let’s keep things in perspective by saying that the Buckeyes haven’t lost a game to a non-Power school in the regular season since falling to Arizona (then a member of the WAC) in 1967. That was 50 years ago.

And though Ohio State has won eight straight over Illinois, it’s lost to the Illini as recently as 2007 – that’s only 10 years ago.

What’s even more significant is that the Buckeyes, like every Big Ten member, will rotate their cross-divisional opponents (the only current protected rivalry across the divisions is Indiana-Purdue). So, along with games vs. Purdue, Illinois and Minnesota – Ohio State will have to square off with Iowa, Nebraska, and Wisconsin.

Again, the additional cross-division game is played instead of a game with a non-Power opponent.

Cross-divisional from the East (2): Rutgers and Maryland

Cross-divisional from the East (3): Michigan State, Michigan, and Ohio State

No Big Ten team got handed a tougher cross-division combo than Wisconsin did last season – basically dropping Hawaii and replacing it with Ohio State.

The Badgers haven’t lost a non-conference game to a non-Power opponent in 13 years – most recently falling to UNLV in 2003. With the schedule change, they’ll permanently replace those odds by rolling the dice with a trio from the following: the Buckeyes, Wolverines, Spartans, Nittany Lions, Hoosiers, Terrapins or Scarlet Knights.

Cross-divisional from the East (3): Maryland, Indiana, and Michigan

Though Wisconsin will enjoy a sizeable reduction in schedule strength next season vs. its 2016 slate – it could have been even more advantageous had the Big Ten not mandated the expansion. Picture a game against Northern Illinois in place of the one with Michigan.

Despite the changes, Ohio State and Wisconsin both achieved double-digit win totals in 2016. The Buckeyes also managed to claim a CFB Playoff slot even though they lost straight-up to the eventual Big Ten champion, Penn State. The Badgers are the team that lost to the Nittany Lions in the conference title game.

It safe to say that both schools weathered the first season of the expansion.

Does that mean it’s really no big deal that the Big Ten has legislated that each of its members play an additional Power foe? Before deciding, take a look at the following statistics. Listed are each members’ combined winning percentage vs. the current Big Ten membership over the last 10 seasons (2007-16) compared to their mark vs. regular-season non-Power opponents during the same time period.

According to actual results, Big Ten teams are, on average, 32.8% more likely to lose a game to an in-conference opponent than to one from the American, C-USA, MAC, Mountain West or Sun Belt.

And – the bigger story is – the Big Ten’s expansion to nine league games means each member school is 16 to 50% more likely to lose an additional game than it was in the eight-game format.

The impact is staggering – especially in the current CFB Playoff climate, where five Power leagues are competing for four playoff slots.

Is it any coincidence that eight of the 12 teams (or 67%) that made the first three CFB Playoff brackets played an eight-game conference schedule to get there?

Did the Big Ten sacrifice a competitive advantage to the ACC and SEC by expanding its conference schedule by one game?

Is one of the key components to leveling the playing field in the CFB Playoff era a mandate that each Power conference play an equal number of league games?

And yes, the SEC and ACC should step up and go to a nine game conference schedule. Drop the silly FCS match-ups and add another cross division game each year.

It’s just a matter of time before the ACC and SEC go to 9 games. My WAG 4-5 years, to coincide with 2 bye weeks rule. It’s more a revenue issue. ACC will do it first

I truly don’t think the BIG going to 9-game schedule is going to cost them a spot in the CFP, it did not last year. Buckeyes picking up Illinois is like playing a MAC team, Illinois has not beaten Buckeyes in 10 years & it only comes down to how much they are going to lose this up coming year to the Buckeyes. Now Wisconsin adding on Buckeyes, that’s a different story but when Badgers got to the BIG Championship a couple of year ago, Buckeyes won 59-0. Just because you play 8-game conference schedule does not mean you’re guaranteed to win your OOC games, just ask Northwestern & Illinois that question, they both lost to W.Michigan, a MAC team. A 2015 pretty good Iowa team lost to N.Iowa, FCS team last year.

In the long run it might, because an extra conference game means 7 more losses, or half a loss per team. Eventually, that will hurt the Big Ten as it has already hurt the Big XII and Pac-12.

In the short term, Clemson 31 – Ohio State 0 hurts them worse.

Consider that no P5 Champ has missed the playoff based upon a cross-division game:
’14 Baylor played round-robin
’15 Stanford lost to Oregon
’16 Oklahoma was undefeated in conference
’16 Penn State lost to Michigan

For thoroughness we should see if there are any teams who “could have” entered their CCG with 1 (0 if G5) or fewer losses yet lost a cross-division game:
’15 Houston lost to UConn
’15 Florida lost to LSU
’16 Wisconsin lost to Michigan and Ohio State

Florida and Houston played 8-game schedules and UF-LSU is an annual game anyway and the Gators lost to ‘Bama. Wisconsin this past year is really the only team that can claim a 9th game hurt them… and they ended up losing the Big Ten CG anyway while the Big Ten still sent a team to the playoff.

Looking back at 9-game, split-divisions, pre-playoff:
’13 Oregon lost to Arizona (case to be made here, if they could pass 11-1 ‘Bama or 12-1 MSU)
’11 Oregon lost to USC (still would have made playoff at 11-2)
’11 USC lost to Stanford (postseason ineligible, Stanford is an annual rival)

3 years is a short time frame. We haven’t seen major CCG upsets recently either. There are still a variety of scenarios the Playoff Committee has yet to encounter real-time. ’14 Baylor is the only 1-loss P5 champ to miss the playoff, and that was more likely due to the lack of a CCG than the 9th conference game.

When your conference has Indiana, Illinois, Rutgers, Maryland, playing an extra in conference game is easier than playing a FCS school. These FCS games give a family a chance to all go to a game without having to take out a bank loan plus these are needed games for the FCS teams to continue having football. If you want to kill all college sports except for the big time programs then go for it, just don’t use unfairness as an excuse to do it. The more schools that have football programs the better off the entire sport is and these games are vital to the continued growth of the sport.

If anything, it makes the champion (or at least media darling with a large fan base) seem more prominent for making it out of that schedule. Pac-12 is still all-in on the FCS games which can hurt their SOS (even though there are many great FCS squads that would easily take down G5 teams on a weekly basis).

Also, LOL at those Michigan numbers.

How in the heck is Indiana, Maryland, Illinois, and Rutgers power 5 games? Maybe Power Rangers. Since the Big Ten has fourteen teams, what do they call the other four teams? The Big Ten and four midgets? Maybe they need a parenthetical like THE BIG TEN (& N,P,M&R). It is like they failed math. How can a league with fourteen teams be called the Big Ten? Some third grader should call them on this.

You clearly are a Special Ed Conf fan. No go back get the 4 junk cars of your weed patch, I mean lawn, in front of your shack, I mean house.

The big issue is another Alabama -Lsu championship. I myself am for playing 8 conference and help fund the smaller less well known teams. It is better for the sport if it become over all more competitive. And has a real championship. ESPN had too much influence.

This is a completely silly article adding nothing to nothing. The BIG adds one conference game to their schedule (that’s 14 teams with 7 games, meaning 7 wins and 7 loses), at the same time of course the BIG drops one non conference game to their schedule (that’s 14 teams with 14 games and on average (in NC play) 12 wins and 2 loses). We’re talking about 5 less wins for the BIG as a WHOLE and not about any one single team. The cream will still rise to the top and will (or could) benefit from playing a presumed “tougher” schedule. The teams or conferences not playing the presumed “tougher” schedules will be marginalized for lack of scheduling efforts. Sorry to repeat, but this article and thought process is silly.