Which Preseason AP Top 10 Team Has The Toughest Schedule? 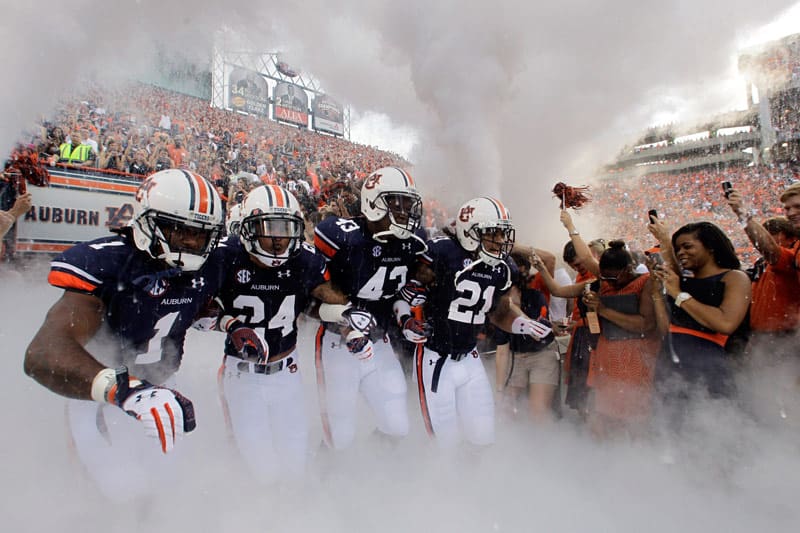 Now that we know which teams are in the AP preseason Top 10, which of these elite teams will have the easiest road to perfection and the College Football Playoff?

The following rankings—unique to FB Schedules—are based on a combination of home vs. away games, opponent’s 2013 combined win/loss records, power-five, non-conference opponents and the number of teams ranked in the preseason AP Top 25 each team will face.

Though not an exact science by any stretch of the imagination, these easiest-to-toughest rankings give an intriguing view into how schedule strength skews the playing field, even among top-tier teams.

The only other AP Top 10 team that hits this low is Oklahoma. Pushing Alabama even further down the line is the opponent’s combined winning percentage—47.3—the lowest in the Top 10.

The cherry on the top of the Crimson Tide’s schedule is that they only play four true road games: Ole Miss, Arkansas, Tennessee and LSU. Florida State is the only other Top 10 team with this advantage in 2014.

What gives the Sooners the edge over the Crimson Tide is an opponent’s combined winning percentage of 47.7—only a whisper better—and five true road games as opposed to four.

Where Alabama does have the advantage is in preseason AP ranked teams—the Tide will play four, Oklahoma will play two. Both have only one preseason Top Ten team on their slate.

Other than that the Bears’ slate is similar to fellow-Big 12 member Oklahoma: five true road games, two Top 25 opponents and one foe ranked in the AP Top Ten.

What prevents Baylor’s rank from being higher is its distinction of being the only team in the preseason Top 10 that won’t face a power-five opponent outside of conference play. Here’s the Bears’ non-Big 12 lineup: SMU, FCS Northwestern State and Buffalo.

Like Alabama, Florida State will travel only four times this season for true road games: NC State, Syracuse, Louisville and Miami (Fla.). Of course they also have Oklahoma State in Arlington, Texas in the opener, but that’s classified as a neutral game.

The Seminoles face seven winning teams from last season and overall their 12 opponents in 2014 combined for an 83-68 record last season, or 55%.

What prevents the ‘Noles from moving further up the charts is that they face only two teams ranked in the preseason AP Top 25 (No. 16 Clemson and No. 17 Notre Dame) and none from the Top 10.

On the plus side for Florida State is their status as the only Top 10 team with three power-five teams scheduled out of conference play: Oklahoma State, Notre Dame and Florida.

Like Florida State, Michigan State is scheduled to face seven winning teams in 2014. Even though the combined winning percentage is slightly lower—at 53.9—the Spartans play five true-road games and three preseason ranked teams.

Of Michigan State’s three ranked opponents two are in the top five: No. 3 Oregon and No. 5 Ohio State. The Spartans also face No. 22 Nebraska.

Like Baylor, Oregon will play six teams that went over .500 last season, but unlike the Bears those teams combined for a 54.9% finish last season and four are ranked in the preseason AP poll.

Ohio State is one of only three preseason Top Ten teams to play eight winning opponents from last season and in total the Buckeye’s 2014 slate combined for a 56.9% finish last season.

Even though that number is third among Top Ten squads, Ohio State’s rating is thwarted with only one preseason ranked team on their slate. The Buckeye’s sole ranked foe in 2014—at this early date—is No. 8 Michigan State, scheduled for Saturday, Nov. 8 in East Lansing.

Despite the fact that UCLA plays only seven winning teams in 2014 (the other top four teams on our list play eight or nine) and its combined winning percentage is 53.2 (seventh among Top Ten teams), it earns its No. 3 rank fair and square.

First up, the Bruins have a whopping five preseason AP ranked teams on their schedule this season: No. 19 Arizona State, No. 3 Oregon, No. 25 Washington, No. 15 USC and No. 11 Stanford.

If that weren’t enough, UCLA is one of only two Top Ten teams to play more than one power-five program out of conference this season. The Bruins travel to Virginia in the opener and then face Texas in Arlington in Week 3.

The game with the Longhorns is technically counted as a neutral game, but if you change its status to an away game—which arguably it is—that gives UCLA six road games, the most of any team on our list.

South Carolina’s 2014 schedule is overwhelming: Eight winning opponents from last season, a combined winning percentage of 61.9% (the highest among the Top 10) and five ranked opponents with one hailing from the Top 10.

If Auburn makes a return trip to the national championship game this season, it will have earned every bit of it.

The Tigers face a whopping nine winning teams from last season, the most among the preseason AP Top Ten teams. The only sub-.500 squads Auburn plays in 2014 are Arkansas (3-9), San Jose State (6-6) and Louisiana Tech (4-8).

Next up, Auburn has a jaw-dropping seven preseason AP ranked teams on its schedule. In other words, 58% of its schedule is made up of Top 25 teams.

Poor Auburn, I think they will have a great team but keep in mind that Georgia & Alabama will want major revenge after the ending to the games last year. Does not look good for Auburn but if they can do it, my hat off to them.

Complete and utter nonsense article. Preseason Polls and SOS are what is wrong with CFB. They are wild guesses in most cases based on who has the best hype machine. It distorts the entire process during BCS era and will continue to. Last year UF was top 10 pre season they went 4-8, but last year this time people were surely saying that was a tough game. Last year Mizzou and Auburn were deemed horrible b/c they had a handful of wins between them in 2012. MIller for OSU may be done for the season, so what does that do to anyone playing OSU if he’s out. Their back up QB’s have thrown 2 passes in actual games combined. A&M was 9-4 but beat 1 team with a winning record in 2013 and they pulled bunch those wins out of the fire thanks to manzel most of the time. They give up 30+ points a game the last 2 years and manzel saved their bacon. What happens without him? They may be mediocre again like they were in the B12. The fact is nobody has a clue what the hardest schedule is going to be. SOS is dynamic ans changes throughout the season so stop the preseason poll and the SOS nonsense.

I agree with you, these polls are all guess work at best and really is more of a tool to stir the pot than anything else thus lighting the fire if you will. There are some valid points here and there; however, so many things can change from season to season ranging from injuries, to players leaving, new recruits coming in, and the overall morale of a team. So many different variables that can make the difference between being #1 to dropping out of the rankings. The true SOS can’t be determined until all is said and done by the seasons end and even though this can be a reference tool to look at prior to the following season there’s usually very little weight it can carry. Texas A&M ranked makes no sense at this point and neither does Georgia being ranked so high, even though Georgia ranked I have no problem with but #12 (REALLY). I really want to see a non-power conference team crash the party this year in the playoffs but for that to happen they’re going to have to run the table and pray that the rest of the conference looks good overall by the end of the year. The only conferences that could possibly accomplish this is the MWC and the AAC, at least in my opinion.

No one – that’s NO ONE voted for Missouri…no one at all…to finish in the TOP-25. NO ONE. Missouri finished the season in the TOP-5!!

The first poll shouldn’t come out until the last weekend in September – at the earliest. Anything before that is purely hype, name-recognition, or based on the previous season’s team.

When is 6-6 sub-.500? But I agree,Auburn does have a rugged schedule,a true rarity these days. Good job on this,Amy.

Amy, you should do a comparison article at the end of the season to see where these teams’ schedules actually end up on the SOS continuum.