Which College Football “Hot Seat” Coaches Have the Toughest Schedules in 2016? 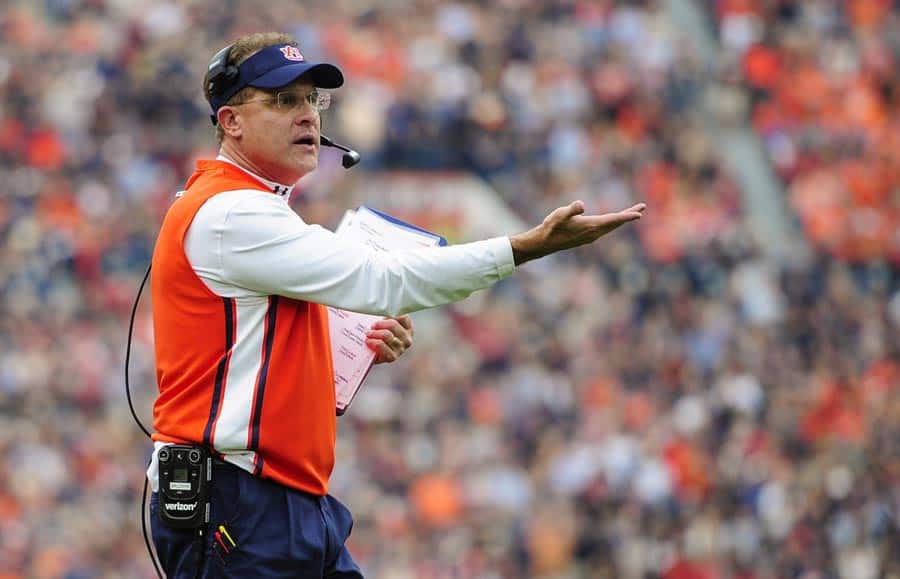 Once you’ve dug a hole in coaching, there’s only one way out – win games.

In college football that means successfully navigating a number of challenges—everything from the inevitable personnel turnover to injuries and yes, the schedule.

Where one guy is trying to save his job vs. Rice and San Jose State, another has to find a way to beat Alabama and Ohio State.

Here’s a look at the ten coaches on the hottest seats (according to Athlon Sports) power ranked by 2016 schedule strength.

Big Ten Opponents: at Maryland, at Illinois, Iowa, at Nebraska, Penn State, at Minnesota, Northwestern, Wisconsin, and at Indiana

In three seasons at Purdue, Darrell Hazell has won six games total and only two vs. Big Ten opponents. Improving on his best finish—a 3-9 mark in 2014—will be easier with a slate that includes zero non-conference Power opponents.

Additionally, Hazell and his Boilermakers will face only one opponent ranked in Sporting News’ preseason Top 25, Iowa, which came in at No. 17. They also completely avoid Big Ten heavyweights Michigan, Michigan State, and Ohio State from the East division.

Non-Conference Opponents: at Nebraska, Sacramento State, at Toledo, and Tulsa

After posting a 20-6 mark during his first two seasons at Fresno State, Tim DeRuyter is 9-17 since 2014 including a 3-9 finish last year.

Though DeRuyter won’t have to face an opponent that’s ranked in the preseason Top 25, he will have to open up at Nebraska. The Bulldogs are 0-2 vs. the Cornhuskers and 5-8 all-time vs. the Big Ten.

On the plus side for Fresno State is the lack of Boise State on the schedule. On the minus is Utah State, Air Force, and Colorado State, the other heavy hitters from the Mountain Division.

After teetering on the verge of dismissal late last season, Les Miles needs to get LSU, at the very least, back into double-digit wins in 2016.

What should help is a non-conference schedule which offers only one real threat, the opener vs. Wisconsin at Lambeau Field. Though not a cake walk, the Badgers shouldn’t be ranked and LSU is 3-0 all-time vs. Wisconsin. The Tigers haven’t lost to a Big Ten team in regular-season play since falling 36-33 at Ohio State in 1988.

As for the SEC slate, it’s as nasty as ever, but not impossible. Miles does have to travel to Auburn, Florida, and Arkansas, but gets what should be the most challenging SEC West foes (Alabama and Ole Miss) at home. Plus, where fellow SEC hot-seaters like Gus Malzahn (Auburn) are set to face six ranked opponents, as of now LSU has a reasonable three.

Paul Haynes is 9-26 in three seasons at Kent State, his best mark, 4-8, came in his first year at the helm.

Even though Haynes is the only guy on our list to have the benefit of two FCS opponents, he’s also one of only two coaches to have two Power teams scheduled out of conference. The only difference is, he’s from the MAC while the other (Texas’ Charlie Strong) hails from the Big 12.

Kent State is 1-16 all-time vs. the Big Ten (the only win a 2012 triumph over Rutgers) and 0-12 all-time vs. the SEC. If that weren’t enough, Haynes’ final five games in 2016 are all against teams who played in bowl games last season.

After back-to-back 5-7 seasons, Mark Stoops has to find a way to score that elusive sixth win, the one that would propel Kentucky into bowl eligibility for the first time since 2010.

What helps is the non-SEC slate, the only real threat being the road trip to Louisville, a team that could still be ranked. Kentucky hasn’t won a game there since, again, 2010. Add in road trips to Alabama and Tennessee, and the Wildcats are set to play three of their preseason ranked opponents away from home.

Even though last season Dana Holgorsen led West Virginia to its best finish (8-5) since joining the Big 12 in 2012, it’s still a far cry from the triumph of his first year at the helm. That was in 2011, a 10-3 mark which included at Big East title and a resounding win over Clemson in the Orange Bowl.

What’s interesting about Holgorsen’s 2016 slate is the neutral game vs. BYU, a program that is considered a Power opponent by the Big Ten, ACC and SEC, but not by the Big 12. Either way, it combined with the opener vs. Missouri makes the Mountaineers’ non-Big 12 schedule among the most difficult in the FBS ranks.

In addition, Holgorsen will face five conference foes ranked in the preseason Top 25 with two, Baylor and Oklahoma, ranked in the Top 10. On the flip side, West Virginia only has four true-road games in 2016.

Though Kevin Sumlin has never dipped below the eight-win mark at Texas A&M, he’s never matched the 11-2 he posted when he took over in 2012.

The Aggies’ 2016 slate falls far short of being easy, but they do open up against a UCLA team that went 8-5 last season and shouldn’t be ranked. The other upside for Sumlin is only four true-road games, while every other coach but one on our list (Holgorsen) has five-plus.

A&M does have to travel to Alabama, but road trips to Auburn, South Carolina and Mississippi State are, as of now, less scary because these programs aren’t in the preseason Top 25.

After posting an 11-14 mark in two seasons at Texas, Charlie Strong is living proof that patience is still a commodity in Austin, Texas.

Unfortunately for Strong, continuing on as the Longhorns’ head guy means squaring off with two Power opponents out of conference, a duo that combined for an 18-8 record in 2015. He’s the only power coach on our list with that scheduling liability.

Add in five preseason ranked opponents (three in the Top Ten) and only six true-home games, and it’s crystal clear that despite the stockpiles of talent at Texas, Strong has his work cut out for him.

Non-Conference Opponents: at Colorado State (at Denver, Colo.), Idaho State, and at Michigan

The scheduling gods did MacIntyre no favors in 2016, prescribing road trips to Michigan, Oregon, USC, and Stanford. It means that, as of now, the entirety of Colorado’s slate vs. ranked opponents is set to be played on the road.

Keep in mind that the Buffaloes have only won two true-road games under MacIntyre, a narrow 41-38 win at UMass in 2014 and the last season’s 17-13 triumph at Oregon State.

Though it seems almost surreal that Gus Malzahn’s seat is hot at Auburn, what started out as a 12-2 product in 2013 slipped to an 8-5 mark in 2014, and then even further to the 7-6 finish last season.

This year, Malzahn will be challenged early and then often. The season kicks off with Clemson, a home game against a non-SEC foe who just happens to be the No. 2 ranked team in the land (according to the Sporting News). Next are road trips to Ole Miss, Georgia and Alabama, ranked No. 7, No. 20, and No. 1 respectively.

What it amounts to is a schedule with six preseason ranked opponents (three on the road), three of which are ranked in the Top 10 (two on the road).

I’m not sure Holgorsen can do enough to keep his job. As for the rest, I wouldn’t want to be in Stoops’ seat at Kentucky – too many likely losses.

While BYU was not named as a Power 5 opponent by the Big 12, they have went ahead in the future and called them a P5 opponent for Baylor’s matchup against them!

Baylor will likely cancel the BYU series if BYU is considered a P5 worthy opponent. Why spoil that perfect record of avoiding any quality OCC opponents? Besides, that would open up more opportunities for Incarnate Word and other equally imposing foes.

Where’s a thumbs up button when you need it?

That extra conference game in the Big 10 (they play nine now) could end up getting a few middling coaches fired before all is said and done.

Les and Gus have the biggest hurdle with Alabama, but even if they struggle this year if they can find a way to derail Alabama they’ll be alright