Where are they now? 10 big name college football coaches from 2010 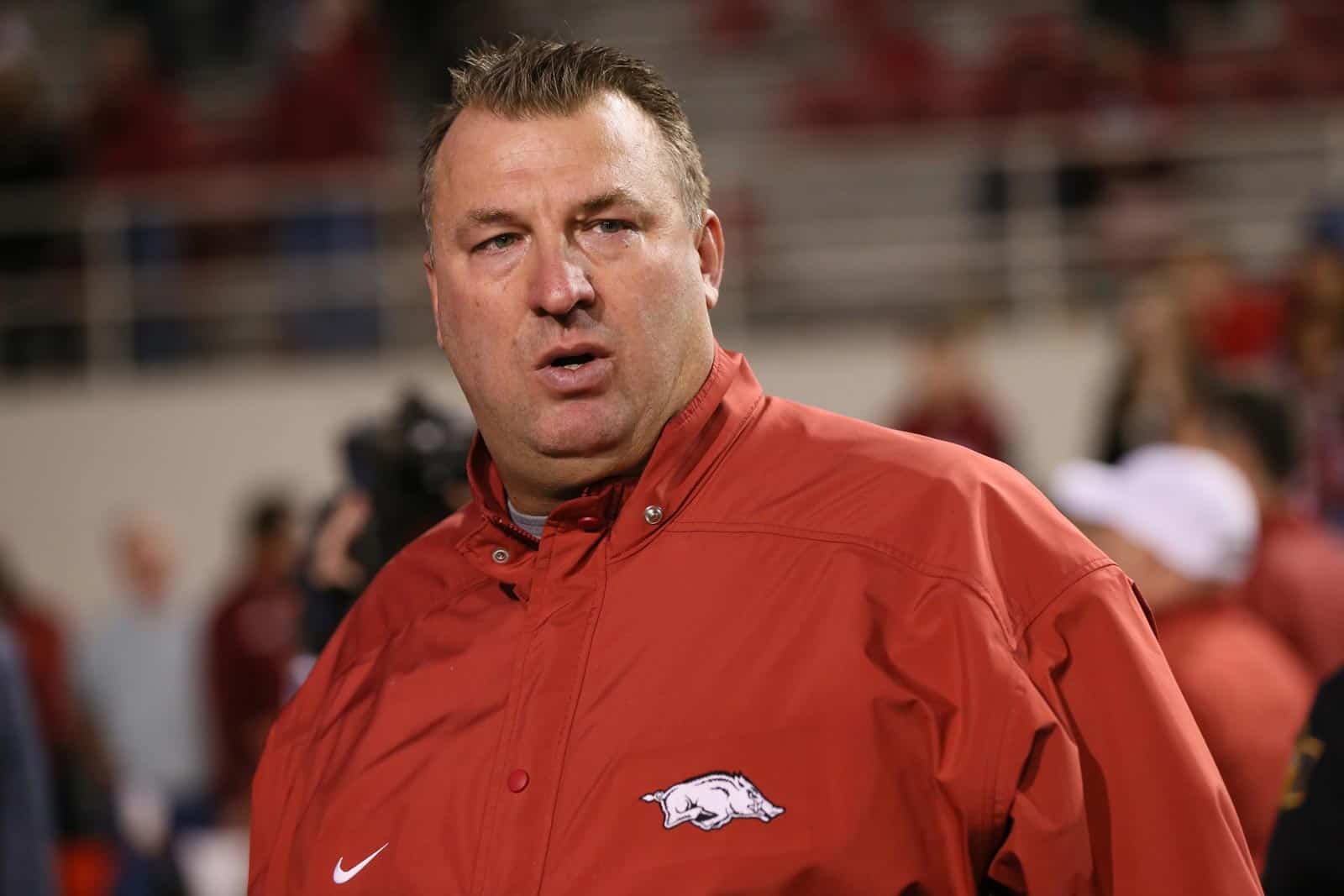 A decade ago, college football was in the 13th season of the 16-year reign of the Bowl Championship Series (BCS). (1) Auburn edged (2) Oregon 22-19 in the national championship and Cam Newton beat out Stanford’s Andrew Luck for the Heisman. Nebraska was still in the Big 12 and lost by a field goal to Oklahoma in the league championship game. Despite an early season upset to FCS James Madison, Virginia Tech beat out Florida State to win the ACC and Michigan State, Ohio State and Wisconsin split the Big Ten title.

Here are ten of the big names in college football coaching that season and where their paths have taken them since.

In 2010, Bret Bielema was in the fifth year of his seven-season tenure at Wisconsin. After a 68-24 run in Madison that ended with three consecutive Rose Bowl berths, Bielema jumped ship to Arkansas where he struggled to a 29-34 mark over five seasons. He was fired after a narrow 48-44 loss to Missouri at the close of the 2017 campaign.

Bielema’s not returned to the college ranks since. He was with the New England Patriots from 2018-19, first as a consultant and then as a defensive line coach. Despite an interest in the Michigan State opening, in 2020 he’ll coach outside linebackers for the New York Giants.

Dooley resurfaced as a wide receivers coach at the Dallas Cowboys (2013-17) and then reentered the college ranks as the OC at Missouri (2018-19). He was recently named a senior offensive assistant at the New York Giants.

Golden’s next stop was at the Detroit Lions, where he coached tight ends from 2016-17 and linebackers from 2018-19. After the Lions decided not to bring him back in 2020, he signed on with the Cincinnati Bengals where he’ll also serve as linebackers coach.

Like Al Golden, Brady Hoke spent the 2010 season proving he was ready to take on a bigger challenge. For Hoke, that meant converting a 9-4 finish in his second season as the head man at San Diego State into an offer to be the head coach at Michigan. Hoke’s tenure in Ann Arbor lasted four seasons which resembled the air slowly being let out of a balloon – 11 wins in 2011, eight in 2012, seven in 2013 and finally the 5-7 mark in 2014 that cost him his job.

Hoke has been a journeyman since, serving as the DC at Oregon (2016) and then coaching the defensive line at Tennessee (2017), the Carolina Panthers (2018) and San Diego State (2019). Coming full circle, he was named the head coach at San Diego State – for the second time – this January.

The 2010 season was June Jones’ third at SMU, just one year after he led the program to its first bowl game since 1984. Jones posted a 36-41 record in his six full seasons (2008-13) with the Mustangs, engineering one of the great turnarounds in college football history. He resigned after a 0-2 start in 2014.

Jones didn’t resurface until 2016, when he spent one season as the OC at Kapolei High School on the island of Oahu in Hawaii. From there, he was the head man at the CFL’s Hamilton Tiger-Cats from 2017-18 and is currently the head coach/general manager of the XFL’s Houston Roughnecks.

Bo Pelini was in his fourth season as the head coach at Nebraska in 2010, posting a 10-4 mark in the program’s final campaign as members of the Big 12. Pelini was fired after a 9-4 finish in 2014. That despite leading the Huskers to a 67-27 record from 2008-14 which included four divisional titles and five Top 25 finishes.

Phillips made stops as a wide receivers coach at Florida (2013) and the Cleveland Browns (2015) before landing a role as an offensive assistant at Ohio State (2016). That led to gigs coaching wide receivers first at Cincinnati (2017-18) and now at Maryland, where he’s been since 2019.

The 2010 season marked the final installment of the four-year Randy Shannon experiment at Miami Fla. Shannon posted winning records from 2008-10 and was 10-6 in ACC play in his final two seasons, but that wasn’t enough to save him. He was fired after a 7-5 finish that ended with back-to-back losses to (14) Virginia Tech and South Florida.

Shannon moved on to coach linebackers first at TCU (2012) and then at Arkansas (2013-14). His next stop was at Florida where he was the DC from 2015-17, a stretch that included serving as the interim head coach for the final four games of the 2017 season after Jim McElwain was let go. Since 2018, he’s been the DC at UCF.

At the close of the 2010 season, Jim Tressel looked untouchable at Ohio State. After a decade in Columbus, Tressel was 106-22 overall, 66-14 in Big Ten play and not only had he captured the 2002 national championship, he was fresh off winning six consecutive conference crowns. It all ended  in May of 2011 when Tressel stepped down amid the cover-up of a memorabilia sale scandal.

After a brief stop at the Indianapolis Colts, Tressel left football for good to become an administrator in higher education. He first served as a vice president at Akron and then in 2014 was named the president of Youngstown State University (where he’d won four national titles as the head football coach from 1986-2000).

Ron Zook was six years into his tenure at Illinois at the start of 2010, engineering just one winning record in five tries. The Illini improved to 7-6 that year and beat Baylor in the Texas Bowl. After a 6-0 start in 2011 and a No. 16 ranking in the AP, they looked to be finally building something. That’s when everything went wrong. Six straight losses later, Zook was fired.

Zook moved on to coach special teams at the Green Bay Packers from 2014-18 and held the same role at the Salt Lake Stallions (a member of the short-lived Alliance of American Football) in 2019. He’s been a senior analyst with Maryland since the AAF folded.

Jim Tressel deserves a second chance. I’ve at times wanted him hired by both the Cleveland Browns and Notre Dame.

Tressel should have replaced Pat Shurmur at Cleveland. Shumur’s last season with the Browns was 2012 when OSU was banned from bowls. During the 2011-12 offseason it emerged that star QB Peyton Manning was not going to remain with the Colts after the season. I wanted him to join the Browns and break them out of the slump they had largely been in since returning to the league in 1999.

But he chose Denver instead, making this choice at the worst possible time because of OSU’s bowl ban and the need for the Browns to step up in 2012 to fill that void. When they didn’t, Shurmur was fired, and their next coach was not Tressel as I had wanted, but Rob Chudzinski. As the Browns had one fewer win in 2013 than the previous year, Chud ended up being Cleveland’s first one-and-done coach in team history, just the latest low achieved by the team in their second life. Subsequent coaches Mike Pettine, Hue Jackson, and Freddie Kitchens could not bring the Browns upward in consecutive seasons either, with Jackson presiding over an 0-16 season in 2017 and Kitchens becoming the second one-and-done coach in team history.

Meanwhile in his last season of 2015, Peyton Manning led the Broncos to a win in Super Bowl 50, the championship I had wanted Peyton to lead Cleveland to. The Broncos have not been back to the playoffs ever since, perhaps because the football gods did not take kindly to Denver’s complicity in The Great Super Bowl Caper.

Shurmur finally got to coach a Manning, Eli, when he became the coach of the Giants in 2018, But he only had 9 wins in two seasons – the exact win total he had in Cleveland – and was fired after last season, sealing him never coaching in the NFL again.

A lot of this could have been avoided if the Browns had hired Tressel years ago. But also, his show-cause order expired in 2016.

That year, Notre Dame finished 4-8 a year after losing the Fiesta Bowl to ironically enough, Ohio State. Many wanted Brian Kelly gone, I had the idea of replacing him with Jim Tressel. But the Irish kept on with Kelly, who would end up leading the Irish to their first consecutive 10-win seasons since 1991-93. But most of the Rudy Curse remains active – they have not won a national title since 1988, or a major bowl since 1993. They were decimated by eventual champion Clemson in the 2018 season’s CFP. Clemson has also beaten OSU in two CFP games, including last year.

My frustration is magnified by the fact that Clemson QB Trevor Lawrence idolizes Peyton Manning, a man I deem a coward for not joining the Browns at a time they needed him real bad, which also contributed to the failure of Johnny Manziel, a player I really liked, at Cleveland because he didn’t have Peyton as a father figure to help him grow. That’s like an actual child having his or her father walk out on them and never returning to their lives. We call them deadbeat dads.

Now, Tressel needs to return to football. It’s in his blood. He only got the jobs that he had/has at Akron and YSU because the show-cause order didn’t apply outside the athletic department. Had it, he would have all but been forced to find work in the NFL. The NCAA should have future show-cause orders apply to all departments of a university, which would be called the “Tressel Rule”.

And now that Urban Meyer is no longer at OSU, I want him to replace Kelly at ND. The Irish need to realize that they will never reach greater heights than they already have under Kelly.

Quite frankly, I wish Peyton Manning had retired after being cut by the Colts, to save me all the misery he caused me in Denver. Because I felt if the Browns couldn’t have him, no one could.

Not a Ron Zook fan but the way the article is written about him is that he had a winning season in 5 years leading up to the 2010 season. Well the season that was a winning one was the 2008 9-3 season in which they played USC in the Rose Bowl. I just thought it should be noted he didn’t skate by to a lower tier bowl but something pretty good. Maybe the people at Illinois thought that he got us to the Rose Bowl why aren’t we going back? In hindsight maybe they shouldn’t have pulled the plug because the Illini just spiraled into a lost decade. Come to think of it maybe Nebraska shouldn’t have gotten rid of Pellini in that they were tired of 9-4 seasons. Lol if only they could see how the rest of the past decade played out!