What do the Last 10 National Champions’ Schedules Have in Common? 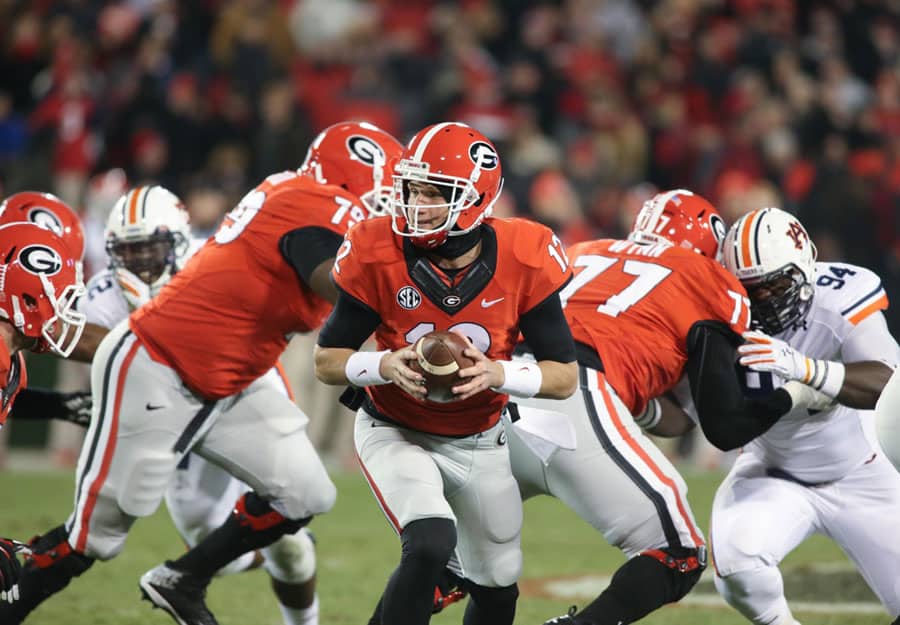 Georgia has a favorable schedule for a title run. (Jason Getz-USA TODAY Sports)

If you could draft up a blueprint of a national championship season what would it look like?

Would it include a certain way to start to the season or a specific mix of opponents? And what about timing?

Can scheduling really be manipulated in such a way that success becomes more likely?

The most sensible way to answer these questions is to use recent history to uncover intersections between schedule format and favorable results.

Take a look eight common threads in the last ten national champions’ schedules, from when Texas won it all in 2005 all the way up until Ohio State’s triumph last season.

It’s a lesson in what to do and what not to do if you want to win big.

The last ten national champions have played a total of 44 true road games, a number that doesn’t include the six neutral contests the group participated in. Of these, 26, or 59%, were played during Week 7 of the season or later.

This means that the title teams have played the bulk of their road games after the halfway point.

It’s a scheduling nuance that is trending up with three of the last four champions playing only one away game each during the first half of the season. The only exception was Florida State in 2013. They traveled to Pittsburgh and Boston College early and then hit the road three more times after the halfway mark.

Pushing a high percentage of the road action, where teams generally face a tougher environment, to later means that contenders have additional time to gel on their home turf.

7. Play a Team from the Sun Belt Conference

It’s no surprise that only three of the last ten champions didn’t have an FCS opponent on their winning slate: Ohio State in 2014, LSU in 2007 and Texas in 2005.

The only Top Ten teams listed in ESPN.com’s Too-Early Top 25 that don’t have an FCS foe in 2015 are: Ohio State, USC and Michigan State.

5. Play the Conference Opener on the Road

The first of two scheduling aspects that calls into question the notion that an “easy start” presents an inherent advantage, only two of the last ten champs didn’t open league play on the road.

Last season, Ohio State kicked off its Big Ten slate at Maryland, in 2013 Florida State opened its entire season with a road trip to Pitt, in 2012 Alabama started its SEC play at Arkansas, in 2010 Auburn traveled to Mississippi State for its first league game, in 2008 Florida started SEC play at Tennessee, in 2007 LSU kicked off its entire campaign at Mississippi State, in 2006 it was Florida again at Tennessee and in 2005 Texas started Big 12 play with a road trip to Missouri.

That leaves Alabama’s 2011 and 2009 title teams as the exception. In 2011, the Tide opened SEC play at home vs. Arkansas and traveled to Florida the next week. The 2009 team got things rolling, again with a home game with the Razorbacks followed by a road trip to Kentucky.

The only other weeknight games for title winners over the last decade were Florida State’s Monday night season opener at Pitt in 2013 and then a handful of rivalry games on the Friday after Thanksgiving.

3. Play Only One Power-Five, Non-Conference Opponent

Only one of the last nine national champions had two Power-Five non-conference games on its slate. That was Florida in 2008, meeting Miami (Fla.) in Week 2 and then wrapping up the season with a road trip to Florida State.

Every other title winner since 2005 has had a single regular-season, non-conference Power foe.

For 2015, the only Top Ten team playing two Power opponents is Clemson, with Notre Dame on Oct. 3 and South Carolina on Nov. 28.

The only such team not playing a Power opponent is Baylor, with non-conference games at SMU (Sept. 4), FCS Lamar (Sept. 12) and Rice (Sept. 26)

2. Play a Power Opponent in the First Two Weeks of the Season

The second scheduling component that squashes the “easy start” plan, only one of the last ten champs has not played a Power team during the first two weeks of the season.

The exception was Florida in 2006, it played Southern Miss and UCF to open the season before traveling to Tennessee in Week 3.

Beyond that, seven of the nine teams that had a Power foe in the first two weeks had the game either at a neutral location or on the road. The only exceptions in this case were in 2014 when Ohio State hosted Virginia Tech and in 2008 when Florida welcomed Miami (Fla).

Not one of the last ten national champions played a regular-season, non-conference game against a member of the Pac-12, Big 12 or Notre Dame.

Six of the title holders played ACC teams (including Florida in 2008 which played two), three played Big Ten foes and one, Florida State in 2013, played an SEC opponent.

Teams that will have to break the trend to win it all in 2015 are USC, which plays Notre Dame on Oct. 17, Michigan State with Oregon on Sept. 12 and Clemson, which gets the Irish on Oct. 3.

Just in case you were wondering, of the ten teams listed at the top of ESPN’s Early Top 25, Georgia is the only program that ticks seven of the boxes for a national-championship ready schedule.

Awesome article, Amy. I really love these kinds of details.

Favorable Schedule for Georgia ? We face the # 1 best and # 2 best teams in The SEC West. One of our non-conference games is against the # 6 team in the nation, and their players all returned after beating us last season at our house, this year it is there. We would have to face Alabama twice to make the play-offs where they would be found again. Playing Alabama 3 times in one season, is an advantage ? What is this a PAC-12 blog ?

The Georgia Bulldogs do NOT have a favorable schedule. Every team on our schedule considers themselves our bitter Rival.

We have won only 54 % of the games after 2007 against teams making a bowl game that season.

We have lost all but 3 of the latest 24 games against teams higher ranked than us in the Final AP Poll.

We average over 4 losses a season the most recent 7-year period.

We have no QB prepared to play, and only 1 who has had any real opportunity does not know still how to set his feet to pass, with awful footwork.

Anyone who believes that a discussion in the off-season of who will win the national championship 2015, should include Georgia, is a DISNEYdawgs.com fan.

The article only says Georgia has a favorable schedule because they have 7 of the 8 criteria that the last 10 national champions have. That’s it, that’s all that statement was based on. The article wasn’t written with Georgia’s schedule in mind.

Then make a point

What do the last 10 Champions have in common. They didn’t beat a Conference Champion from a BCS/Power 5 conference in their non-conf schedule.
Who has done it?
From 1998-present
1998 Tennessee: Big East Champion Syracuse
2002 Ohio St: PAC 10 Champion Washington St
2004 Southern Cal: ACC Champions VT(Although Championship was vacated)