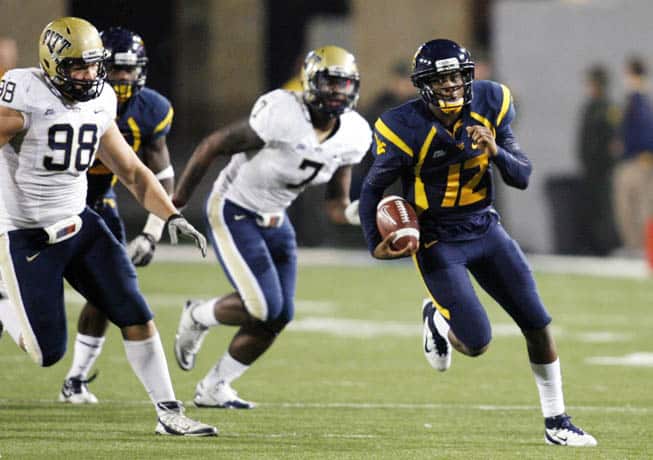 When West Virginia moved to the Big 12 Conference in 2012, the Mountaineers left behind perhaps their fiercest rivalry game – the “Backyard Brawl” with Pittsburgh. But the two schools have been in discussions to revive the series and are trying to settle on dates.

“We’ve talked to Pitt, but they’ve got a lot going on, because they’re trying to get Penn State back on their schedule,” WVU Director of Athletics Oliver Luck told the Bluefield Daily Telegraph. “I think they have, so they’re trying to figure out when they can squeeze us in. Their AD and I just talked last week, so we’re trying to get that set up. It’s all about dates.

“I think it will get done, but it’s all a matter of when.”

West Virginia has openings in each of those years except 2016. Both schools are wide open from 2020 into the future, although WVU announced a series earlier this week against Virginia Tech for 2020 and 2021.

The return of the Backyard Brawl is certainly something that Pitt and WVU fans and most college football fans would like to see. The Mountaineers won the last meeting in 2011, but still trail 61-40-3 in the series that began in 1895.

Back in May, Pitt athletic director Steve Pederson told ESPN that he was talking to WVU about renewing the series, but that they would not be able to play annually.

“We’re both trying to figure out when we can do it,” Pederson said. “We’re both in favor if it’s in the best interest of both schools.”

Oliver Luck followed that up with a discussion on tougher non-conference schedules with the Bluefield Daily Telegraph.

As previously mentioned, West Virginia has already finalized a two-game contract with Virginia Tech. They also appear to be closer to scheduling future games against Penn State.

With #VT home-and-home done, #WVU working on potential Penn St. and Pitt agreements, per Mountaineers source. No tentative dates yet

sure it’s possible. it’s called stop the realignment nonsense and have schools that are in the same geographic location form an eastern all sports league similar to the one Joe Paterno wanted to create 30+ years ago. I don’t understand why something as logical as this idea never materialized.

Because Joe Paterno was a giant douche who wanted to keep all the revenue for Penn State.

Three reasons
1—Because BC, VT, Syracuse, and Pitt are thrilled to be in the ACC
2—Because Rutgers, Penn State and Maryland are delighted to be in the Big Ten
3—Louisville and West Virginia has very little financial leverage and no significant following outside their home states.
and
4— Cinci, Connecticut and UMass are completely irrelevant.

WV has a huge following outside of West Virginia, know your facts.

Now some of that has to do with their poor academic reputation; but a lot of it has to do with the fact they don’t draw TV ratings outside of TV markets 65(Charleston-Huntington-Ashland) 155 (Bluefield-Beckley) 159 (Wheeling-Steubenville) 166 (Clarksburg) and 190 (Weston).

Even in WVU’s home market Pittsburgh, a WVU game gets smaller ratings than concurrent Pitt or Penn State telecasts.

I realize their is a large diaspora of Mountaineer fans who have been displaced by the dismal economy, but the numbers are not that significant on a national level.

I really hope WVU and Pitt get to play again from time to time in the future. It was a fun rivalry that was very intense!

In the early 80s, Eastern football was Pitt, PSU and the 5 dwarfs. No one else had any leverage to dictate terms. I’m sure as each program closed the gap on those 2, discussions would have been made to distribute revenues more evenly but because no one approached this with an open mind that’s why all of the Eastern schools are now in leagues based all over the country except for the Northeast.

Dave, the NorthEast doesn’t play real football and no one cares about them.
Sometimes I’m not sure that the ACC even cares about them that much.
Perhaps the ACC only cares at all because they care about more than just football…

Doesn’t much matter anymore because rivalries are a thing of the past. I do find it comical when ADs say that they’re “trying to renew games against old foes” when it would have been just as easy for these “old foes” to form a conference.

Dave – Bear in mind that most of those “old foes” were in the same conference for quite a while… which is why these games are “renewed.”

Here’s the point that I’ve been trying to make. Since realignment was taking place all around them, why did the ADs and Presidents from schools like VT, WVU, Pitt, SU, BC, RU, PSU, L’ville, Cincy, UConn, TU and possibly MD create their own league?????

They could have a commissioner who i’m quite sure would have been able to secure a pretty lucrative bowl and tv schedule. This way, ADs wouldn’t be complaining about “trying to squeeze these games” into their OOC slate. They would all be league games and matter solved. You have a hell of a football conference and a pretty good hoops league as well.

Am/was I taking too logical of an approach on here with this idea?

Almost all of the biggest names on your list, PSU, VT, Pitt and Syracuse are better off where they are now. Soon Louisville and Rutgers will be too.

That leaves WVU in a conference where the 2nd best team is either Cinci or UConn. AD’s and Presidents dont look out for college sports; they look out for the best interest of the school that hires them.

Make it thanksgiving nite. Will never forget sitting in 15 degree weather and watching pat white and Slaton tearing them up. Thank god for makers mark

Sooner the better, fans and Alumni deserve this great rivalry!

Why? So WVU fans can pelt Pitt players/coaches/fans with coins or beer again? Thanks but no thanks

Bill (the one that’s commenting for years not the newbie) – if your past comments are as misinformed as your current ones you really should stop.

Don’t care whether WVU plays Pitt, Penn State, Va Tech, Syracuse, Virginia, Maryland or any of the other dinosaurs from past years. The future is forward, not backward.

WVU ranks in the top 25 in merchandise sales. That would indicate a strong following. The ACC had the Tabacco Road snobs blocking our entry. WVU would not get in the Big 10 because we are not an AAU university. The SEC was simply looking at markets for the SEC Network. WVU did not get credit for the markets where they have a strong presence (DC, Pittsburgh). The SEC took Mizzou simply for footprint. If it was what turns on sets, it would be WVU in a landslide.

Wouldn’t it be great – if it was all based upon the quality of the games,

I agree with Greg. WVU vs. Pitt produced some epic football games, but the boorish and often criminal behavior of many of the WVU fans makes me glad that those games are over (at least for the time being). Pitt vs. Penn State features equally epic games, and the rivalry is intense (still), but it remains largely good-natured. I’m glad to see that one returning to the schedule!

The bottom line is this: Pitt has no desire to play WVU. WVU fans ruined the rivalry when they threw a silver coin at a Pitt coach. There is a minority of Pitt fans who want the rivalry renewed but the administration does not want it. Case closed.

WVU was never a prime rivalry with Pitt until Pitt lost the matchup with Penn State in the early 80’s. It was the Pitt-Penn St. game that was traditionally around Thanksgiving with the WVU game placed somewhere in the middle of the season. When you factor in that Pitt was 52-22-1 against WVU up to 1982 it certainly was not a competitive rivalry whatsoever. Only in the past few decades with WVU getting stronger and Pitt considerably weaker, coupled with the loss of Penn State has this game taken on any additional meaning, but if you are talking traditional rivalries, Pitt-WVU is a distance second to Pitt-Penn State and if only one of these can be maintained it’s a no-brainer which one it should be.

as for wvu fan behavior.it is no worse than any school. you always have jackass fans who do stupid things.case in point.some years back my daughter-in-law was going to GEORGIA and was at the gator bowl for the FLORIDA rivalry when some drunken dolt from the florida section above urinated on her and other georgia fans setting below them.

I attended the mississippi state game at state and was insulted by a drunken miss state fan.wvu kicked their butts that day so that made it okay.

oh by the way.the visitors section was almost full for that game which is pretty good for a team that has no draw outside wv.

i live in florida and every time wvu played at USF there was a large contingency of wvu fans and i always watch wvu games when they are televised in this area.

i seldom watch SEC or ACC games.the area where i live you constantly see the WV logo plastered on cars.

i even made the Stanford game in palo alto in 1972 when Bowden was our coach.

Some on here are ignorant of the facts. WVU has drawn some of the highest ratings ever for ESPN and FOXSports. True the head of the ACC didn’t want WVU. But the SEC was ready to admit WVU, that’s why game day was in Morgantown. They, the SEC, were to announce that WVU was it’s newest member. Then South Carolina and Vanderbilt objected. Not because of academics, but recruiting. South Carolina didn’t want another close school in their back tard. Vanderbilt was up set with Gee, their past president and our past and present president. Gee attempted to intervene and that pissed them off. Facts really suck.