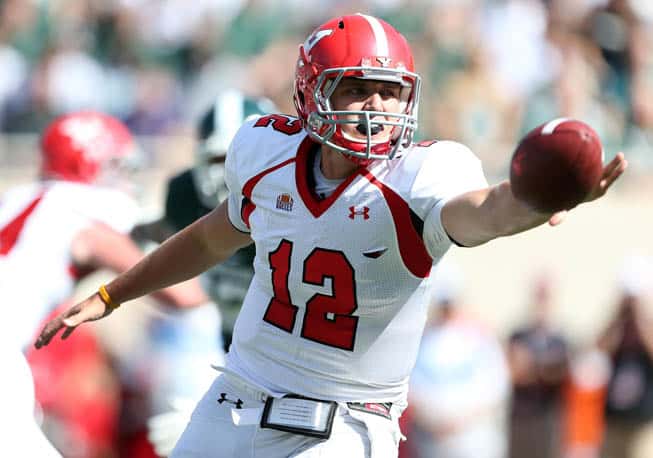 The West Virginia Mountaineers will host the Youngstown State Penguins in 2016, both schools announced today.

The two schools will meet at Mountaineer Field in Morgantown on Sept. 10, 2016. It will be the second meeting between the two schools, coming 76 years after their first matchup in 1938.

West Virginia now has two of their three non-conference games set for the 2016 season. The Mountaineers are also scheduled to take on the BYU Cougars at FedEx Field in Landover, Maryland on Sept. 24.

The final non-conference game for WVU will likely be the season-opener on Sept. 3.

Youngstown State, a member of the Missouri Valley Football Conference in the FCS, has never played a team from the Big 12.

The Penguins missed the FCS Playoffs in 2013 after finishing the season 8-4 overall. YSU won four national championships between 1991 and 1997, but hasn’t won a conference title since 2006.

I have no problem with WVU playing Youngstown an FCS program WVU has been and is scheduling a very respectable OOC if you look at their current and future OOC schedules.

Baylor..and then there is Baylor with Art Briles….Not an single OOC game with a BCS or P5 opponent this decade except Duke in 2017/2018. Thank goodness they scheduled Incarnate World on 2019 to fill up the OOC schedule with cupcakes….Baylor Art Briles, cashing the Big 12 checks.written by the other members for SOS

Baylor doe not give a rat’s ass about anyone’s opinion of them.. They may be good now, but everything eventually returns to the norm and Baylor will fall off the charts and back into oblvion where they spent 80% of the time over the past 75 years.

Do we get to hear from any Baylor apologists?

Is this part of the N.F.L. schedule A.D. Oliver Luck was talking about? So now, not only are the Mountaineers in a conference that makes no geographic sense – forcing their fans to travel to the likes of Manhattan, Kansas and Waco, Texas and endure home games with no juice like against Iowa State and Texas Tech – but even their non-conference slate is an open-handed slap to fans. West Virginia may have the worst athletic department for its customers in P5.

Lame! When are the P5 going to stop scheduling CRAP games? This announcement is so stupid. Mountaineers are conceding that they have to buy themselves an extra win to survive in the Big 12.

I’m looking forward to this matchup! We hadn’t beaten an FBS team since WV’s biggest rival, pitt back in 2012! Go penguins!!!

Love those penguins love those mountaineers tough game to watch