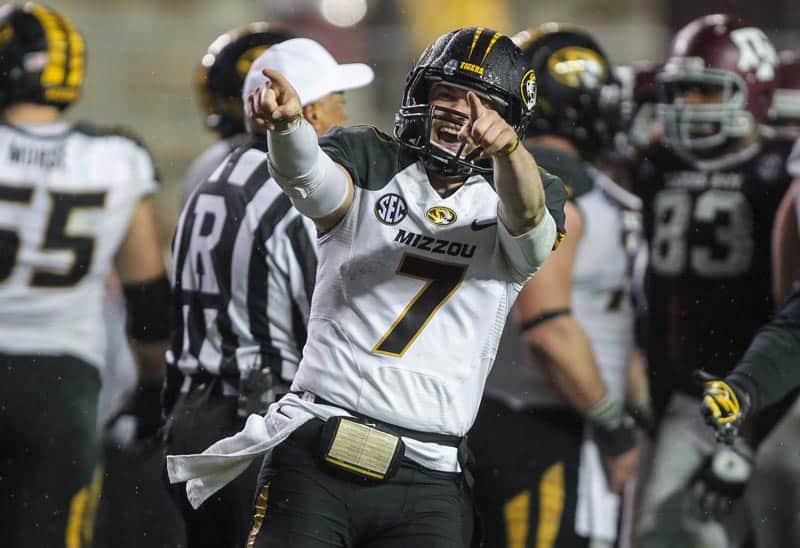 Run ball and control clock or…you can just take advantage of six turnovers and shut out a team for the second consecutive week. Not only has Arkansas shut out two consecutive opponents, they shut out LSU and Ole Miss in back-to-back weeks. LSU had just taken Alabama to overtime and lost and Ole Miss was ranked No. 8. Oh, and the Razorbacks hadn’t won an SEC game since 2012 prior to last week’s win against LSU.

I predicted Arkansas would win by running the ball and controlling the clock. They didn’t have to. They took an interception and returned it 100 yards for a touchdown. They forced (or Ole Miss committed depending on how you look at it) six Ole Miss turnovers. Bad Bo showed up in Fayetteville. Bo Wallace was high-quality goods for much of the season. Then he went to Arkansas and became Wal-Mart clearance. See what I did there, you guys?

The only thing left to ask about Arkansas regarding the 2014 season is whether the College Football Playoff Selection Committee will have the Hogs ranked No. 2 or No. 3 Tuesday night.

Bowling in the West: For the first time in the history of division play in the SEC, the entire Western division became bowl qualified Saturday with Arkansas’ win over Ole Miss. With the massive amount of bowl tie-ins for the conference, this is great news for the SEC and for bowl directors. Arkansas, Ole Miss, Mississippi State, LSU, Texas A&M and Auburn should all travel relatively well with Arkansas being the best choice of everyone at this point with Mississippi State possibly playing in the College Football Playoff or getting a bid to play in a Fiesta/Peach/Orange Bowl.

Week 14 College Football Playoff Breakdown: The Top 4 is the same as last week and after Florida State loses to Florida (SPOILER ALERT) and Texas defeats TCU on Saturday, Ohio State and Baylor fans will stand on the streets and politic for their team to be in the Top 4 like its nobody’s business.

DUE TO TIME CONSTRAINTS, WE MOVE AHEAD TO FURTHER ACTION

WARNING: This week’s rivalry games could be harmful to small children and their mommas. OOOHHHHHHHHHHH! WE TALKIN’ ABOUT SOMEBODY’S MAMA! IT JUST GOT REAL IN WEEK 14, DAAWWWG!

Thanksgiving Tradition: The popularity of this game’s Thanksgiving kickoff will only grow each year. This is a great rivalry and I’m glad the SEC decided to allow Arkansas and LSU to divorce as “rivals” in order to add two rivalry games to an already historic rivalry weekend. Arkansas-Missouri and LSU-Texas A&M will matter in the final weekend for pride even when a trip to Atlanta the following week is on the line.

Pride and nothing else: Speaking of pride, this game will certainly determine nothing much more than bragging rights. Texas A&M was ranked No. 5 in the AP Poll at one point this season, now they are fighting LSU for fifth place in the West. Honestly, I know the record states otherwise, but seeing Arkansas at the bottom of the West seems wrong at this point considering they shut out LSU and Ole Miss and may be the hottest team in the country right now. Here’s to next year being about a little more than fifth place pride.
FINAL SCORE: LSU 27, Texas A&M 21

THIS is when you throw out the records: Missouri is a full four games better than Arkansas in the SEC, but there may not be a team playing better than Arkansas right now. Then again, Arkansas forced six timely turnovers in their 30-0 shutout of Ole Miss. The Rebels were inside the Razorback 30-yard line four times and came away with zero points. We’ll learn more about these two teams in this one game than we may learn about anyone the entire weekend. Is Arkansas really just a victim of being a good team with a tough schedule and bad record or will Missouri prove they are the premier team in the East whether no one in the country has ever looked at them as a serious contender. The Tigers have earned the right to practice the “why not us” slogan for the season. A win over Arkansas Friday afternoon will add Missouri to a surprisingly large list of East repeat winners (Florida 1992-1996; Tennessee 1997 & 1998; Georgia 2002 & 2003; Florida 2008 & 2009).

Just score more: Missouri has only scored 170 points in conference play. The only teams with a worse total in the SEC are Vanderbilt (85), Tennessee (170) and Arkansas (151). Lucky for the Tigers, the defense has only allowed 139 points, which is third best in the conference behind Alabama (110) and Ole Miss (118).

Arkansas has only scored 151, but has allowed only 156 points. The problem with any stats and records regarding Arkansas is that anything recorded prior to November 15 appears worthless. Since November 15, the Hogs have outscored two ranked opponents 47-0.

The good news for both of these teams is they don’t have to score a ton. Just more. This will be the best game of the weekend. The winner of the Western Division will be happy to see this one played as a physically exhausting game that required multiple overtimes to determine a winner. And this one does just that.
FINAL SCORE: Missouri 50, Arkansas 48 | 5 Overtimes

Careful, boys. At least one of you are playing next week: Georgia will know on Friday whether or not they can catch a ride back to Atlanta with Georgia Tech for the SEC Championship Game. The Dogs will have to muster all the Tech hate in their heart to win this one if Missouri beats Arkansas Friday afternoon. Tech is not a bad team and Georgia has proven against Florida that a decent run game can look like a hot knife slicing melted butter.

If Missouri loses, Georgia will have to get their minds back on this game knowing they have another game to play next week. This is nothing new for the Bulldogs, so the former would probably cause a much bigger problem than a Mizzou loss.  Either way, Georgia gets hot in this one and wins big.
FINAL SCORE: Georgia 45, Georgia Tech 14

Dab-0-for-five: Can Dabo get Clemson over the hump and beat South Carolina for the first time since 2008? Who knows. No matter how good everyone thinks Clemson is and how bad everyone believes South Carolina to be, the Gamecocks have found a way to not only win, but do it in dominant fashion. The Gamecocks have outscored the Tigers 155-71 during the current five-game winning streak. Something tells me Dabo gets the best of Spurrier-o this year.
FINAL SCORE: Clemson 27, South Carolina 17

Bleeding Blue: Those members of the Blue Mist wearing shirts that read “I Bleed Blue” are asking for a tourniquet. The Wildcats have been one game from becoming bowl-eligible since October 11 when they defeated UL-Monroe to go 5-1 overall with the only loss coming in a controversial 3-overtime game in Gainesville. Since October 11, the ‘Cats have clawed their way to the litter box with five consecutive losses, all the while being outscored a soul-crushing 219-91. The blood will continue to flow Saturday beginning at noon in Louisville and stopping immediately thereafter because basketball.
FINAL SCORE: Louisville 28, Kentucky 13

It’s not really that bad for CBS: On the surface this game does not look as great as it once did a month ago. While that may be true, it’s not like CBS is being forced to broadcast the Tennessee-Vanderbilt game from Nashville. This game still has a ton of interest and in all honesty, this game may have more on the line than the Iron Bowl. Mississippi State will send the nation into a whirlwind waiting to see if: 1) Alabama wins in Tuscaloosa and 2) If the CFP Selection Committee will have the Bulldogs in the top four if Alabama wins.

This one will be exciting. The entire day will live up to the hype surrounding the rivalries. Be prepared to need a break before the Iron Bowl kicks off after watching this marathon.
FINAL SCORE: Mississippi State 51, Ole Miss 49

Remember Jacksonville: Florida appeared completely mismatched with no chance of beating Georgia on November 1 in Jacksonville. Then Florida ran for over 400 yards on their way to a 38-20 win over the Bulldogs that, even at 18 points — was not that close.

Florida State hasn’t lost since the Lee Corso era in Tallahassee, but they keep playing with fire and they will eventually get burned. If Florida can remember Jacksonville and forget Gainesville, the Gators players and anyone in orange and blue on the field will be glad to carry lame duck Willy Muschamp off the field in Tallahassee as he yells obscenities at small children wearing FSU war paint and Native American headdresses. It’s a moment no one (outside of Tallahassee) will ever want to forget.
FINAL SCORE: Florida 31, Florida State 30 | FSU goes for two after late TD rather than going to overtime

Orange is the old orange: Tennessee is about to kill Vanderbilt in front of fans that will refer to Vanderbilt Stadium as Neyland West. Expect the Vols to have at least 70 percent of the stadium. Orange will be the the old Orange again.
FINAL SCORE: Tennessee 63, Vanderbilt 0

Kick Six: Let this be the last time we have to hear about Kick Six.

Survive the first quarter: Be prepared for another war if Auburn survives the first quarter. In order for the first quarter to be considered “survived,” Auburn will need to be within one score. If Alabama is up by at least nine points headed to the second quarter, the game may resemble the Tigers’ debacle in Athens.

October Auburn vs. November Auburn: Alabama fans hope the November Auburn that has bumbled its way to losses to Texas A&M and Georgia after the leftover fairy dust from 2013 apparently wore off immediately following Laquon Treadwell’s fumble into the end zone and subsequent season-ending injury. If Auburn plans on surviving the first quarter, the October Tigers better be the ones getting off the bus at Bryant-Denny Stadium.

Bryant-Denny Dominance: Alabama has outscored its opponents 268-67 at Bryant-Denny Stadium in 2014. This dominating stint at home (15-game winning streak going back to 2012 Texas A&M loss) has included an unprecedented explosive offense. The ‘Tide have scored 35 touchdowns this season with Blake Sims accounting for 17 of them (14 through air and 3 on the ground). Sims’ ability to keep the ball from being caught by the opposing defense inside BDS has been helpful as well (2 interceptions).

Get Six: After the game, Alabama fans will put their own spin on last year’s crazy Iron Bowl and call it “Get Six” after the Bama defense holds Auburn to two field goals. Alabama’s devastating balanced attack will lead to a ground game that opens up the pass just like Nick Saban ordered.
FINAL SCORE: Alabama 31, Auburn 6

Open Date: All SEC teams play the week prior to SEC Championship Game to prevent a bye situation for one team and not the other.

Dabo is actually 1-5 against the gamecocks. The win over them in 2008 as an interim head coach is what got him the job as full-time head coach.

Too much rum in the Egg Nog.

I’ll take that Nick. 1-5 is better than 0-5. All I know is he better be 2-5 against him after Saturday. I think that we are probably equally matched but after the past few years we have to beat te Gamecocks. Too many disappointing big losses for Clemson in the recent past a the losses to SC make it all that much worst. We are so close to competing for a national title on a regular basis if we can manage to overcome this hurdle. Come on Deshaun and if he can’t go, come one Cole. One more game brotha. Go tigers baby.