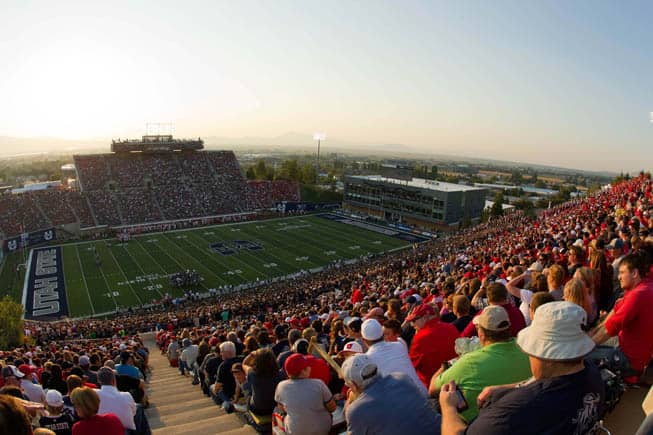 For fans outside of the state of Utah, this may seem like a boring non-conference matchup between two teams who are unranked and looking to get a win. For those inside the state of Utah and those who understand the history of the rivalry, this is second in importance only to BYU-Utah in the Beehive State.

For Utah State, the game rates right up with playing Utah for bragging rights in state. While BYU-Utah State is not the Holy War (as BYU-Utah is known), it is an intense game for both sides. To find the value of the rivalry, all one needs to do is take a look at the website for Utah State athletics and their ticket availability. Fans are only allowed access to the BYU ticket through either a season ticket or a package involving other games this season besides Boise State. Otherwise, the only single seats available to the 25,713-seat Merlin Olsen Field at Romney Stadium are standing room only.

Why the first Friday night in October? It allows for LDS church’s conference which occurs on that weekend. Utah State and BYU have matched up 22 times on this Friday night, with the Cougars holding an 18-4 record going into the 2013 version.

Overall, BYU holds a 45-34-3 advantage versus the Aggies, with a 37-22 advantage in the 59 matchups since the Wagon Wheel Trophy was introduced 1948. The trophy also has a history of being stolen back by the losing team, showing the intensity of the rivalry between these two programs in the state of Utah. Also, after the 2013 season, this will be the only Utah team BYU plays for at least the next two years, as the Holy War will not be played in 2014 and 2015.

BYU-Utah State, while not the Holy War, is a great game, and one of the best matchups to see live for the week of October 5th.

Patrick Johnson is a Special Correspondent with StadiumJourney.com.

Save the college games for Saturday (and Thursdays, Tuesdays and an occasional Wednesday).

Most High Schools in Utah are playing Thursday this week. He tells you why in the article. With your amazing research skills I’m sure you can figure it out.

The movement to having Thursday and Friday night college football games is great for fans and for business. I’m glad to have the excitement spread out throughout the week and not just on Saturdays. i care little about high school football.

but I have to wonder why the NFL doesn’t do the same to college. If the NFL split there games up between Saturday and Sunday more of their games could be shown nationally.

The NFL is actually prohibited by federal law from playing games on Friday or Saturday during high school & college football seasons. Of course there used to be national Saturday NFL games in December, and I miss those.

John Madden use to say ‘Sundays are for the NFL, Saturdays for college, and Fridays for high school, without high school football there is no NFL’. The one Saturday, I would like to see the NFL schedule late day games for is Army v Navy day. Obviously, schedule one or two for later in the day where it don’t conflict with that game. That Saturday there is a lack of football on.

A lot of Utah high schools move their football games to Thursday on the first weekend of October (conference weekend), because BYU always plays that Friday night and often against Utah State.

Haha. Anyone notice that the picture depicts a game at Romney stadium with the Utah Utes visiting? Anyway, it indeed should be an interesting matchup. Last year’s score was 6-3 with BYU winning it in Provo. Taysom Hill threw a 3-yard pass resulting in the only TD scored in that game.

After this year (2013), the game is scheduled for late November on Saturdays! No more dictating by BYU that the game best be played the night before LDS conference.