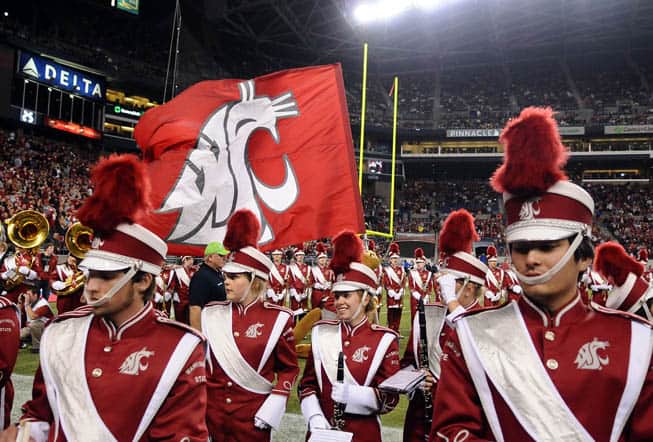 Washington State will host Rutgers at CenturyLink Field in Seattle on Thursday, Aug. 28, 2014. The Cougars will then travel to face Rutgers at High Point Solutions Stadium in Piscataway, NJ. The two schools have never met on the football field.

The Cougars were hoping to start their previously scheduled series with Wisconsin in 2014, but the Badgers have different plans. UW appears to be in the final stages of setting up a two-game series against LSU, with the first game at Reliant Stadium in Houston.

August 30, 2014 was the previously scheduled date for the aforementioned Washington State and Wisconsin contest in Pullman. The matchup in Madison was set for Sept. 19, 2015.

In wake of that, WSU also announced today that the Wisconsin series would still be played, but it will now start in 2022 with a trip to Madison followed in 2023 by a home game for the Cougars.

Washington State is 0-2 all time versus Wisconsin. The last Badgers victory came in 2007, while the other one came in 1976. Both games were played in Madison.

“Adding two BCS opponents to those already on future nonconference schedules benefits our program and is sure to be appealing to our fans,” said Moos. “Our 2014 schedule also allows us to bring five quality Pac-12 games (Arizona, USC, Cal, Oregon and Washington) to Pullman to showcase our newly completed facilities.”

In May it was reported that Washington State had “handshake agreements” for five home-and-home football series against BCS schools. It now seems that Rutgers was one of those five schools.

Washington State has now completed their non-conference schedule in 2014. After opening with Rutgers, the Cougars travel to Nevada and then host Portland State of the FCS.

In 2015, WSU is also slated to host the Wyoming Cowboys. The game was previously set for Sept. 12, but a new date will have to be assigned after the Rutgers series was announced.

As of now, the non-conference schedule for Rutgers in 2014 includes a visit from FCS foe Howard and Tulane, which will be a member of The American next year. Also on the slate is a trip to Annapolis to play the Midshipmen.

Looking further ahead, the Scarlet Knights’ 2015 non-conference schedule marks the beginning of a home-and-home with Kansas. Rutgers opens the 2015 season at home vs. Norfolk State and later plays Army at Yankee Stadium.