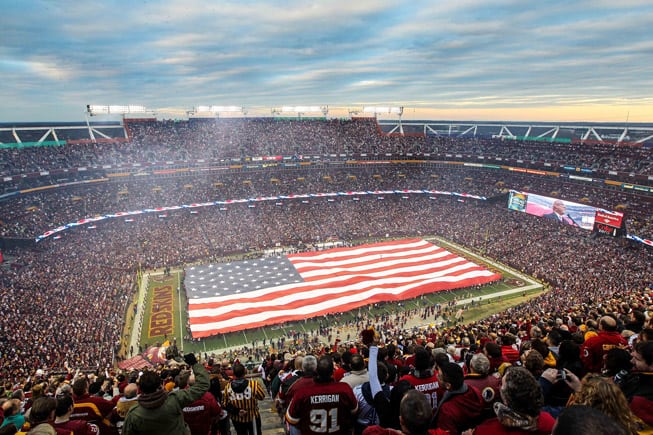 The Virginia Tech Hokies and the West Virginia Mountaineers will open the 2017 football season at FedExField in Landover, Maryland, both schools officially announced today.

The game, which is set for Saturday, Sept. 2, 2017, will be the 52nd overall meeting between the two schools. West Virginia currently leads the series 28-22-1, but the Hokies have won two straight and nine of the last twelve.

“It is an exciting matchup for both schools’ fans to look forward to,” said Whit Babcock, Virginia Tech Director of Athletics. “I appreciate the work of Coach Beamer and Associate AD John Ballein in arranging this extremely strong non-conference matchup. Not only will the game renew a passionate rivalry, it will also be played at a site that is centered in a major alumni base for both schools.”

Virginia Tech and West Virginia are also scheduled to meet in a home-and-home series in 2021 in Morgantown and in 2022 in Blacksburg.

“West Virginia University had a great experience at FedExField in 2012, and we are looking forward to playing there again against Virginia Tech,” said Oliver Luck, WVU Director of Athletics. “Not only do our players enjoy playing in NFL stadiums, West Virginia has a lot of alumni living in the Washington, D.C. metro area and playing at a great venue like FedExField gives our fans a road game that is in close proximity. West Virginia and Virginia Tech have had a great historical rivalry over the years, and it’s great that the two schools can renew the series, starting in Washington, D.C. in 2017, and then two games in 2021 and 2022.”

“We are excited to welcome Virginia Tech and West Virginia to FedExField in 2017,” said Redskins Chief Marketing Officer Mitch Gershman. “We are proud to continue the commitment to our season ticket holders and fans to host the most competitive and nationally acclaimed matchups in the country.”

The addition of the FedExField game completes Virginia Tech’s non-conference schedule in 2017. Tech is also slated to host Delaware on Sept. 9, travel to East Carolina on Sept. 16, and host Old Dominion on Sept. 23.

Virginia Tech is the second announced non-conference opponent for West Virginia for the 2017 season. The Mountaineers are also slated to host East Carolina on a date to be announced.

After conversations with WVU, we can confirm the Black Diamond Trophy will be up for grabs when the #Hokies and WVU meet in 17, 21 and 22.

The Mountaineer better have his gun to stop these turkeys

Grab yalls Turkey calls , were getting us some turkey on the table in Sept. !!

Them chokies don’t stand a chance that close to our neck of the woods. Turkey dinner for all my fellow eeirs. LET’S GOOOOO OOPS

I live in va but the GREAT MOUNTAINEERS will kick butts