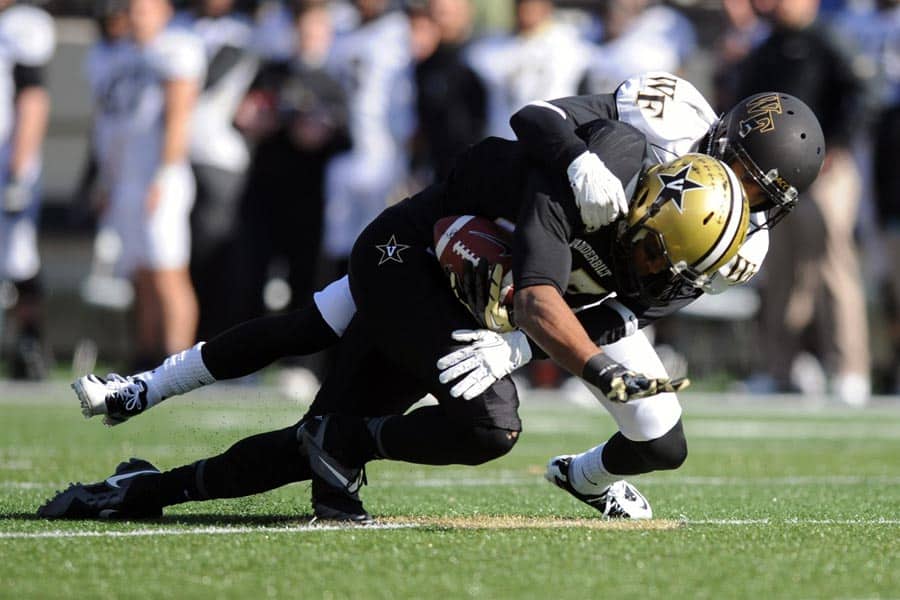 The Vanderbilt Commodores and the Wake Forest Demon Deacons have scheduled a home-and-home football series for 2022 and 2023, the two schools have announced.

In the first game of the series, Vanderbilt will host Wake Forest in Nashville, Tennessee on Sept. 10, 2022. The Commodores will then travel to face the Demon Deacons in Winston-Salem, North Carolina on Sept. 9, 2023.

Vanderbilt and Wake Forest have met 16 times on the gridiron dating back to 1964. The Commodores currently hold a 10-6 lead in the series.

Vandy now has two scheduled non-conference games for the 2022 season. The Commodores are also slated to visit Northern Illinois on Sept. 17. The 2023 game against Wake Forest is the first announced game for that season.

Wake Forest now has three non-conference games slated for 2022 and two for 2023. The Demon Deacons are scheduled to host both Army and Air Force in 2022 and travel to Notre Dame in 2023.

Vanderbilt also announced today that they will host the Mercer Bears on Sept. 5, 2020. That game will be the season-opener for both teams.

This would make a really good EVERY year end-of-season matchup for the two similar private colleges. It would add another SEC v ACC matchup to go along with UK/UL, USC/Clemson, UGa/GT, and UF/FSU, if played on the last weekend before conference championship games. (Hmmm, and if someone could get Mizzou/Kansas, and a XII-added Memphis against Tennessee on that last weekend….)

As a Vandy alum, there is no “private school rivalry” with Wake Forest. Vandy’s biggest rival is Tennessee (other historic rivals are Ole Miss, Kentucky, and Alabama, in that order). Wake is fine paired with Duke.

Memphis would be better paired with Arkansas than with Tennessee.

Mr Vandy other than some success over the Black Bears you have no rivalry with the Vols or Tide. The ‘dores beat Alabama last in 1984 and have what 3 wins over the Vols in last 30 years.This is not Alabama/Auburn or Ohio State/Michigan by any stretch. Wake is a natural rival that you actually beat more often than you lose too..Congrats on getting a degree from one of the best schools in the country. You should thank Alabama. Auburn, Florida, LSU, Tennessee etc. for the big ass check Vandy gets each year from the SEC

Well, Mr Vandy, you MISSED the point. Playing an end-of-season game against an OOC helps set the stage for a more successful SEC championship game, as the winner of the SEC East Division would be known for two weeks, not just one. Of course, as others have pointed out, there’s no chance Vandy’s going to be in an SEC championship game anytime soon. Play your in-conference rival then the next-to-last week… if you find one.

Uga Hater- Vandy is Alabama’s third most played series (ahead of Auburn). Alabama has beaten Tennessee nine straight times, does that make that series less of a rivalry? I think not. Rivalries are about more than wins and losses (see Navy-Notre Dame). Plus Vandy’s rivalry with the teams I mentioned are more evenly matched and fiercely played in other sports (basketball, baseball). There is no “natural” rivalry with Wake. I’m not sure why you think it’s so “natural” just because they’re both academic schools. So we beat them more than we lose to them, so what? That does not make it a rivalry. History, geography, and competition make rivalries. As for the big check Vandy gets from the SEC (of which they contribute to in other sports they do well in), that money stays within the athletic department. It does not fund the academic side or my degree. FYI Vandy has the second biggest endowment fund in the SEC (second only to Texas A&M). So I can thank other alumni for the excellent education, not the SEC (the SEC can thank Vandy for being in the SEC, otherwise the SEC would get ZERO respect as to academics).

David- You’re saying I MISSED the point (of playing an end-of-season game against an OOC therefore helping set the stage for a more successful SEC championship game, as the winner of the SEC East Division would be known for two weeks, not just one)??? So under this theory, Alabama-Auburn should be played second-to-last week of regular season, along with Ole Miss-Mississippi St., Ohio St.-Michigan, and other rivalries. Because for some reason a conference championship game is more likely to be successful if we know who’s in it two weeks prior instead of one week prior? No wonder I missed the point, it makes no sense!! Ending the season with a meaningful game is what makes the most sense! Vandy and Tennessee have ended the season against each other going back to the 1920s (except for 2002-2013 where it was the second-to-last game, which was at Vandy’s request so that students could attend the game before leaving for Thanksgiving break; in 2009 it was the last game but on the second-to-last week).

If anything, having a meaningful game and/or a fierce rival on the last week is more exciting. How great would it be for a crappy Auburn team to beat an undefeated Alabama team in the last week, knocking them out of the SEC Championship game?

Say what you guys want, but UT-Vandy on rivalry week is here to stay, and Vandy-Wake is nothing more than just another game (btw the six or so years it was played at end of season did nothing to help foster a rivalry).

Personally, I’d love it if UGa closed with Tennessee every year. Lots of bad blood with the Vols and spills over into recruiting too. Tech is getting pretty boring.