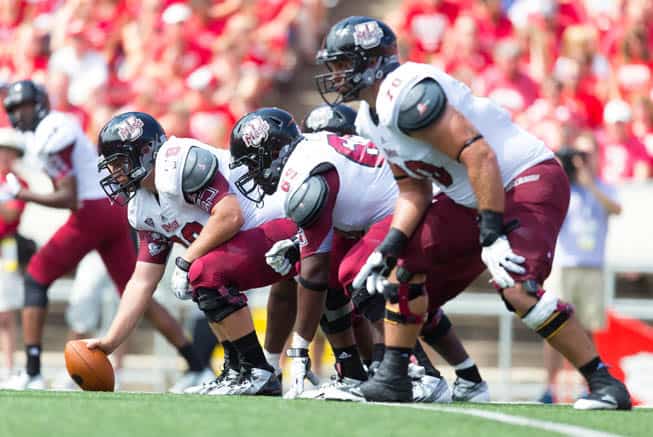 The UMass Minutemen will leave the MAC after the completion of the 2015 football season, the schools and conference announced today.

“UMass has been a valued partner during its brief time within our Conference, however the 2014 and 2015 seasons will be the final two football seasons for UMass as a football-only member in the MAC,” said MAC Commissioner, Dr. Jon Steinbrecher.

UMass joined the Mid-American Conference in football only back in 2012. They have played only two seasons in the conference, compiling a record of 2-14 and 2-22 overall.

According to the MAC release, a contractual clause kicked in after Temple unexpectedly left the conference in 2012 to join the Big East. The clause stated that UMass then had a choice to become a full member for all sports or to remain football-only for two more years.

Rather than join the MAC in all sports in 2016, UMass has opted to play the required two more seasons in football and then depart.

“While the report is not complete,” UMass Athletic Director John McCutcheon said, “we believe full membership for all sports in the MAC is not a good fit for us. Because most of the MAC schools are in the Midwest, the additional travel would strain our athletic budget and pose considerable time management challenges for our student athletes. We are confident that, within the next two years, we will find a more suitable conference for our FBS football program.”

It’s not currently known where the Minutemen might end up in 2016. The Sun Belt is looking for a 12th member, but like the MAC, it wouldn’t be a good geographical fit.

The American Athletic Conference has been mentioned, but they will have an even 12 members in 2015 when Navy joins.

UMass is set to open the 2014 season on August 30 against Boston College at Gillette Stadium in Foxborough. The Minutemen will also host Colorado and EMU at Gillette and will have three conference games at the newly renovated McGuirk Alumni Stadium in Amherst.

With UCONN and Cincy waiting by there phones daily for the ACC or another conference to call I think that the AAC is the logical destination for UMASS. They are best suited to wait it out and if they have to go Independent for a year or two then they can do what Idaho and New Mexico St have done. I would call BYU and setup a 2 or 4 game series if I were them.

I don’t think the ACC needs or wants to expand to 16. Cinci would jump if the Big XII would have them, but UConn is a victim of geography and small dis-interested market.

Dis interested market com on man uconn just Sold out the garden in n.y.c The conn is right next to n.y.c small market don’t think so.

BYU would kill UMASS. BYU schedule is already as easy as it is

I think BYU would go for it if the road games were in Foxborough (or Fenway) instead of Amherst.

…get Army on the phone as well…

John—-Some schools are “basketball schools” or “football schools”. UConn football never generated the type of support that hoops gets.

You know conference realignment is out of control when a team like UMass tells the MAC they’d rather play somewhere else.

UMass has nothing to offer another conference. Their attendance sucks, they are not a quality team on the field and not a factor in the Boston TV market. I don’t see other conferences rushing to add them. If the AAC found themselves with a single vacancy; I think they would prefer to invite Army and UMass would be a second choice. There is also talk that Liberty, Villanova and/or James Madison may want to upgrade. If they do, I think they might even jump ahead of UMass.

The MAC east is the best geographical fit they will find. The struggled to compete with the conference. They have to make it into the AAC for this decision to workout for them. They must feel like their relationship with Temple and UConn will get them in.

There aren’t all that many top recruits in New England or NY areas. Why would UConn want to elevate UMass to the level where they are a viable competitor for those players. The AAC already has a problem with the bottom football teams being weak (USF, Temple, Memphis) UMass will drag the league down even further.

UMass still has trouble beating UMaine and UNH, who smartly stayed firmly put in FCS. And of course, UMaine BEAT UMass easily this past year, and UNH will beat UMass terribly in the coming year.

This may be a situation where UMass tries to lure current FBS and FBS wannabees in the North to Mid-Atlantic and form a new, better geographically fit conference. Think UMass, paired with UConn, Cincy, Temple, Navy, Army, and/or Buffalo, and possibly call up the likes of Deleware, JMU, Liberty, etc. Might not be the sexiest conference or have bowl tie in’s, but at least it will have geography in a world where geography is hugely discredited.

No way would Cinci, UConn and Navy quit the AAC for the league you propose.

I like the thinking of a NE/Mid Atl FBS Co ference….I’d ad Fordham to the mix. They have recently beat Army and Temple.

My Chips thank you for the easy wins, adios!

Excuse me for the one removing Henrk and Tuck writing! I am talking to u! i know them and they where very hurt by u removing it. Please stop it! @#!$ the Chips! ee best in the michigan! i will be hurt as well if u remove this repay!

If you wanna be a troll, then go to YouTube, but FBS Football? That doesn’t even make any sense at all…

Although this is way bad geographic wise, the Sun Belt is always looking for new teams. Maybe even C-USA

UMass should drop back to 1-AA football

i agree as well. you can’t go 1-11 in your first two years as a FBS team and expect anyone to pick you up for their conference. It’s time to go back to FCS

They should… ***Obviously*** but the article stated that they want to stay in FBS. (Although I think it’s a terrible idea to stay in the FBS if I were UMASS…)

Villanova and UMass in 2017

The best thing would be this: First, UAB gets there football team back and stay in C-USA, next C-USA sends Charlotte to the Sun Belt, so they can have a 12th school, then UMass can go to C-USA, evening out the league.

UMASS needs a total face lift, spend some money,get state support , bring in some big names, commit to raising the athletic profile of the region.