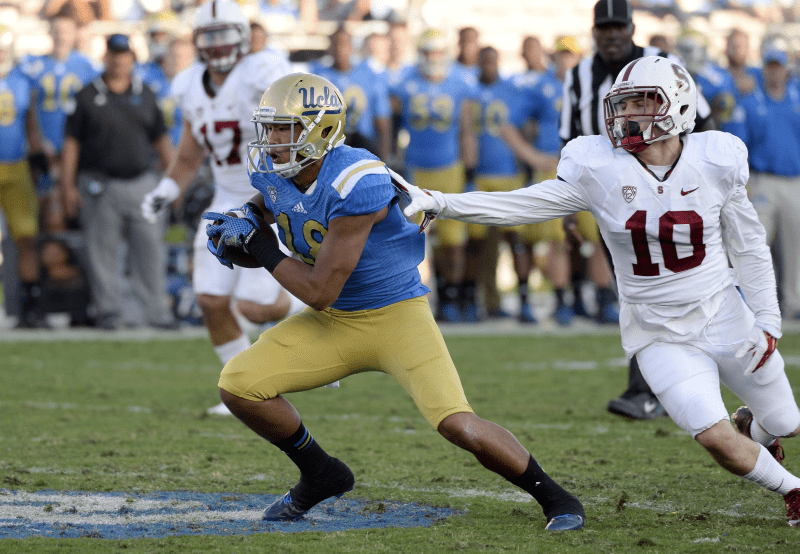 UCLA announced a number of future out-of-conference contests early Wednesday, per a release from the school.

The Bruins will face opponents from the SEC, American and Sun Belt conferences in games played between 2018 and 2026.

Cincinnati will also play a home-and-home with UCLA. The Bearcats will visit the Bruins to open the 2018 season (September 1). UCLA’s trip to the Queen City will open the 2019 season, with the game taking place August 31.

South Alabama is the newest member of the 2022 UCLA schedule, with a westward trek slated for September 17.

Along with these additions, the 2019 visit from San Diego State has been moved to September 7.

Georgia vs. UCLA, wow. Kind of burying the lede there, actually.

This is where it would be good to have a “sub-headline”. :) I’ll change the headline — good point.

Playing Georgia in 2025 is a headline? Come on man.

yes it is how is it not

UCLA vs. Georgia is not a headline? Come on, man!

Cincinnati to the Big 12. They are a big fish in a small pond. It will be nice for once to see Cincinnati play in prime time. I hope the Big 12 stop playing games and add them.

I’m pumped to see Cincinnati play on the West Coast.

But Georgia cancelling the home-and-home series with Oregon didn’t make sense either.

Crabbes , It makes perfect sense….. Georgia had no shot in hell at beating Oregon either game.That;s whay it was cancelled. Ucla will punch them in the throat both games… Just like they did Bama in 1999 and 2000 home and away….

No chance in hell? They did not cancel the game because of that & there is no truth behind Georgia losing both times since the game(s) have not even been played yet. Unless you are going on the fact that UCLA will beat Georgia cause they beat Bama, oohhhh, 15yrs ago, really? It is nice to see that Georgia picked up another PAC-12 school since they have been getting bashed for cancelling the Oregon game. And the game is set for 2025, not 2015.

“What gets lost in the shuffle with Oregon, (athletic director) Rob (Mullens) had no interest in playing the game either,” McGarity said. “It wasn’t like Georgia cancelled. Rob was new and I was new and we both agreed that at that particular time it was not an important thing for the program.”

How did Oregon do against who? O yeah Utah… lol shut your month

Joe you are a dumbass

Lol. UCLA can’t even punch their selves in the throat. Go DAWGS.

Literally 10 years from now!!!! No need too fight bc who knows where either program will be

In the old days, this would have meant a days-long train journey for the DAWGS.
UCLA would have played ag’in’ a half asleep Georgia team (and, possibly…only possibly) won the contest, because of it.
It doesn’t make sense to go cross-country, to play a non-bowl game, though.

I’d like to make that train trip only wish it would be longer than one day ( think it would be).

What is the all time record for Ga.vs UCLA?” Look it up dumb ass!!!!! before you punch anybody. What is UCLA”s record vs any SEC team?

I remember the last time UCLA came to Athens and we ran them out of the stadium. Took them over 30 years to even think about coming back. Welcome back left coasters and enjoy your beat down in Athens

It was in 83 I think and it was in a torrential downpour. A good game won by UGA!

Gotta love the passion. Easy to hate the SEC. Good problem to have. Nobody hates the PAC10. Only time to hate the PAC10 is when they refuse to play your homecoming.