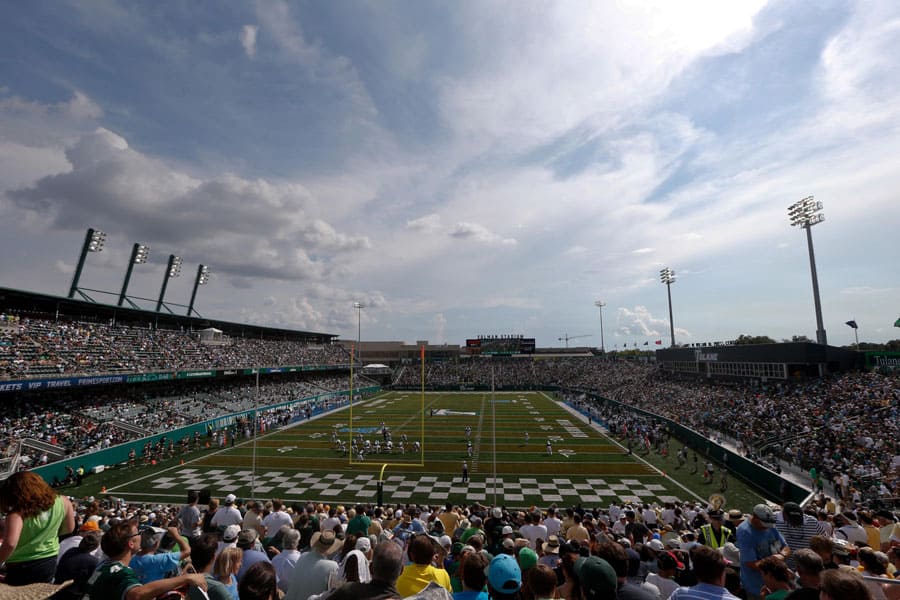 The Tulane Green Wave and the UMass Minutemen have scheduled a home-and-home football series for 2016 and 2022, Tulane Director of Athletics Rick Dickson announced today.

In the first game of the series on Oct. 1, 2016, Tulane will travel to take on UMass at Gillette Stadium in Foxborough, Massachusetts. Six years later on Sept. 10, 2022, the Green Wave will host the Minutemen at Yulman Stadium in New Orleans.

The 2016 meeting between Tulane and UMass will be their first-ever meeting on the gridiron.

Tulane also announced today the addition of a home game in 2016 against the Southern Jaguars of the Football Championship Subdivision. The Green Wave have faced the Jaguars twice, winning 41-7 in 2001 and 37-19 in 2002.

“The addition of UMass, along with the chance to play in Gillette Stadium, will be a fun and accessible game for our northeast fans, while hosting Southern is consistent with our goal of playing an in-state opponent on a regular basis. With the schools in such a close proximity, the game should feature a fun and festive atmosphere,” Dickson said.

Other non-conference games for Tulane in 2016 include a home game against UL Lafayette on Oct. 8 and a trip to Wake Forest (date TBA).

UMass, which will compete as an FBS Independent in 2016, now has 10 games scheduled for that season.

Glad to have Tulane on the schedule for 2016. And it’s a ways down the road, but a trip to New Orleans in 2022 sounds like a hell of an idea. I can imagine Tulane fans might not be thrilled with this series based off previous comments, but they should be good games.

A fair number of Tulane fans have actually canceled their season tickets over this if you can believe the message boards.

A h/h with Umass with the return game not until 2022 is silly, but doing so at the expense of the (winnable) game @Ms State is downright ridiculous.

And nothing against UMass, we’ve been on the bottom and struggling to keep a program ourselves, but if these are “good” games that will be a very bad sign for tulane. These are being billed as rent a wins, borderline FCS game. That’s troublesome (why are we dumbing down the schedule?)……but if we do that and LOSE (or close) we have big problems.

How can anyone cancel a game against an SEC opponent ? Especially Tulane, which has been playing Mississippi State since the early 1900’s. And the two universities are an easy drive apart. Tulane needs to man up or abandon ship instead of taking the path of least resistance. And the AD needs to be made to walk the gangplank THE DAY BEFORE YESTERDAY.

Kudos to Tulane for scheduling UMass. Playing in Gillette is awesome and worth the trip. The UMaine community made a huge event out of playing UMass there season before last, and it paid off in a victory, plus a later FCS first round bye, and hosting UMaine’s first home FCS playoff game. This also puts UMass in a good position, in that if the AAC is ‘robbed’ of another school such as UCF or Cincinnati, UMass would fit well there to give UConn and Temple another regional rivalry. The AAC could add Army at the same time, keep 12 teams, etc.

Lost last sentences… So, playing Tulane, an AAC school, is a good move towards that.

The only way that UMass would get into the American is if the ACC picks up UConn. The ACC already has too many mouths to feed with the worst TV contract in the Power 5 so won’t expand to 16 teams. The GOR prevents any ACC team from leaving until 2027. Big 12 will not pick up UConn since their FB is so bad and they are so far East. If Big 12 expands it’ll be Cincy to placate WVU and then either BYU or Utah State to get back into Utah. Get use to Independent until they drop back down to 1-A. No way they will get a TV contract except for a few bucks to show games on ESPN3 and the program will simply be too expensive to maintain.

UConn won’t ever end up in the ACC. Cincinnati, and other(s) to the XII is a strong possibility. At that point, the American will want to stay at 12, so UMass and Army would be in. Utah State is extremely unlikely to ever end up in the XII though. Colorado State would be most likely. Adjacent state to Kansas, and Ft Collins is a XII kind of town.
.
Anyway, if the American ends up with UConn, UMass, Army and Temple in the NE, that’s a good ‘pod’ of 4.

What second team, after Cincy, would the Big 12 possibly take? At most there would be one opening, and why would the American take UMass when they already have a team in Geographic area? And anyone who thinks that UConn wouldn’t block UMass entry into the American is living in a fantasy world. The best chance for UMass is that a reshuffle opens up a place in the Sun Belt, but the Sun Belt has already said “No Thanks”. With the requirement to have12 teams to hold a championship game going away, there is now no reason or the Sun Belt to even expand.

And Army will never be in a conference again. Their membership in Conference USA around the turn of the century was a complete disaster. And their mission and funding is so different from other schools (except 2) that economics and scheduling considerations will not force them into a conference. More likely Navy goes back to Independent than Army goes into a conference.

Do you seriously think the Big 12 would want Utah State? And what do you mean “back into Utah”? Utah was in the Mountain West, I don’t know what you are talking about.

Jim— there has long been a lot of rumors that the b12 is interested in Tulane when (if?) expansion ever happens. Central Flirida is also a possibility (they want in the Florida market).