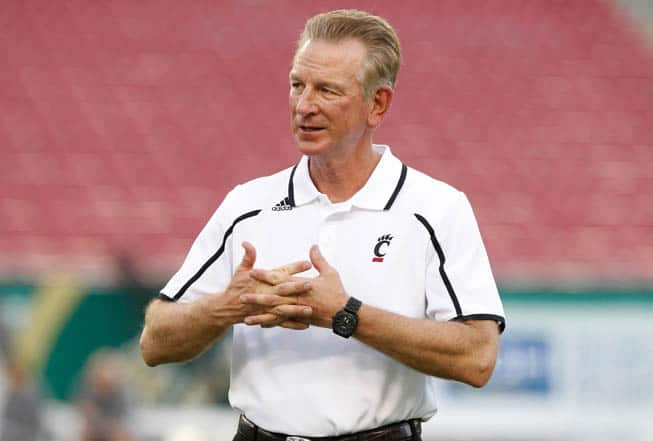 Last month, Tom Groeschen of the Cincinnati Enquirer reported the Cincinnati Bearcats and the Alabama Crimson Tide were having discussions about playing some future football games.

One of the possibilities that was reportedly being explored was Cincinnati hosting Alabama in 2015 to open the renovated Nippert Stadium.

But Alabama traveling to Nippert in 2015 is not very likely because the Crimson Tide would be left with only six home games, an occurrence that is avoided whenever possible by the big SEC schools.

Yesterday, Cincinnati head coach Tommy Tuberville joined the JOX Roundtable on 94.5 FM in Birmingham and essentially stated that a home-and-home with Alabama was unlikely.

“I’m in charge of our schedule now, so, I’m out there trying to find teams to play,” said Tuberville. “Now would I be really fired up about it (playing Alabama)? Probably not because it would be a one-game match. The reason we won’t play some of the other teams is because you can’t get a return game.”

Tuberville is mostly correct in that statement, especially regarding Alabama. The Crimson Tide have only played one home-and-home series under Nick Saban (Penn State in 2010 and 2011). They also played the back half of a series against Duke in 2010, which began in 2006 and was scheduled earlier than that.

Instead of more home-and-home series, Alabama has opted to go the neutral-site game route. The Crimson Tide have played five neutral-site games under Saban, have two in the cards (2014 vs. WVU, 2015 vs. Wisconsin), and have been rumored for more.

Tommy Tuberville went on to talk more about scheduling and how difficult it is to land a home-and-home series with the bigger schools.

“We’re building a new stadium, 45,000 seats, it’s going to be really nice. But a lot of teams won’t come play us on our home ground,” Tuberville said. “They think that it’s too tough a challenge or too risky, especially now with the teams having to play their conference games.”

“We’ve got BYU on the schedule. I’ve got Michigan home-and-home coming up. Let’s see…we’ve got talks in with Texas A&M and some other teams. It’s just hard to get a team to say ‘Yeah, we’ll have a home-and-home with Cincinnati’ when it’s a little bit risky. We’re not a bad football team. Look, we’ve got good football players.”

“We’re just not going to be one of those teams that’s just going to go somewhere and play and not get a return game. So I’m throwing my bait out there to try to find that school who will do a home-and-home in the next 5-6 or 7 years.”

Cincinnati is scheduled to open the 2014 season on Friday, Sept. 12 when they host Toledo at Paul Brown Stadium in Cincinnati. That’s the third week of the season and it follows consecutive open dates for the Bearcats. Tuberville also talked about that anomaly.

“It’s totally screwed up from administration’s of the past at Cincinnati. It was totally blown.”

Cincinnati is looking for a big time opponent to open up the 2015 campaign – their first season in the newly renovated / expanded Nippert Stadium. They already have a game scheduled vs Alabama A&M, but that could be moved to a different date. They have two options in my opinion. They could have Miami FL move their 2015 game at Nippert from October 3rd to September 5th. Or, they could play an AAC conference game to open the season. A lot of conference opponents don’t have a game set in stone for Sept 5, 2015 yet (including Tulsa, UCF, East Carolina, Tulane & Memphis).

Cincinnati plays at ECU in 2015 (most likely)

UCF would be an intriguing one for sure. Two of the best two teams in the conference.

Agreed, having a big football program visit would really energize the crowd. The problem that exists is arrogance, many of the fans of these football programs wine about playing in smaller venues and or greed from the athletic administration.

In 2015, the AAC will finally have two divisions with a consecutive 1 and 1 with the other division.
East: Cincy, ECU, Temple, UConn, UCF & USF
West: Tulane, Tulsa, SMU, Memphis, Houston & NAVY

Fresno state would be a good opener

This scheduling thing is a never ending process, and we see that Tubbs has personally taken over football game scheduling n that’s a good thing.

I just think it’s ridiculous that Alabama not only has to make it a point to play 7 home games but also doesn’t want to schedule a home and home series with anyone all because of greed. Like they don’t make enough money as it is, some bull schnizzle right there. Poor fans, the only high powered match-ups they’ll be able to see is in conference and an occasional neutral site game that might be interesting. I’m rooting for WV and Wisconsin just because now, probably won’t win but who knows people thought Oklahoma was going to get crushed and looked what happened ( granted OK is a much stronger opponent then the two Alabama has scheduled, in my opinion).

I have enjoyed Alabama neutral site games over the years & hope they continue to do them. Whether Bama wins or lose it I think it is good for the sport, brings excitement to the game, better recruiting, fans (from both sides) get out to new stadiums instead of being “at home” all the time. Great for television & the neutral site games are being coming very popular now, Bama is not the only one doing it!

Yeah, sure. Okay boy. Other teams travel to neutral site games when they are in Bama’s backyard. Did you hear Big Bird is real too!?!

Nick Saban is yellow and a greedy p-o-s.

I would not consider Dallas or Jacksonville Bama’s backyard. Your clearly a Nick Saban hater in which is your opinion, yellow? Greedy, well, which college coach isn’t? Big Bird? Now you lost me.

I’m a huge Bama fan and I would like to see more big time home and home games.

Me too. But Cincy isn’t big time.

Yeah, but FCS schools and the Sunbelt teams are… Smh.

Why would bama go to cincy on a h&h, its not greed, its just logic, I’d love to see tubs vs bama but bama would lose money when they Dont have too, its a good idea for a single game series though, tubs would be ready to go, might catch bama reeling, not likely though.

Yeah, Bama doesn’t need to lose any money. If they played a silly home and home they might not be able to keep paying recruits meaning Bama’s string of #1 ranked recruiting classes to the middle of nowhere, Tuscaloosa, AL “that has no beach no nothing to offer a college football player, with lone exception of kid who grew up pulling for Bama from AL” would come to a crashing halt because you know that little midget is gonna make damn sure he gets paid. WAKE UP NCAA! The Tide is doing it again, and have been starting with lil Nick’s second recruiting class.

chestnutoak: Wow, some people have nothing better to do then to bash & make accusations with no proof on whats going on behind the seen’s of college football. Also pointing out that Tuscaloosa has no beaches & nothing to offer, you forgot to mention about 115 other towns & cities that have Universities have no beaches. Claiming players are getting paid behind the seen’s is one thing, not sure if there is a University that is not playing their players. You also forgot to mention the other Universities that are on probation for playing players. WAKE UP chestnutaok! You can’t just accuse one University of doing it with no proof & while we all know most of them do it.

Bama losing money is a F’ing joke, they just wouldn’t get Jerry Jones’s 6 million if they played Cinci ! Call it what you want, but it is Saban only doing what Nick wants to do. He won’t play any team coached by Tuberville because Tubbs will make Bama his Biotch again! 6 in a row at Auburn, he just knows how to coach, just as well as Little Nicky ! Bama would hate to take one on the chin to open a season v/s an AAC school like Cincinatti ! Bama shows its fear by refusing H & H games, screw all these Neutral Sites, Bama’s 7 home games and 1 or 2 neutral sites, and 3 road games per season ! It’s just a matter of time before they want the Iron Bowl moved back to Legion Field !

It’s funny to see some of you bash Bama the way you do! You can bet if one university does anything regarding recruits, so do the rest, as Day said. It seems as though you guys are talking crap out of jealousy. Everyone wants to act like Alabama walks around acting like the King, but in reality, those 18-22 year old boys get out on the field and bust their butts, working hard as ever, to win ballgames just as much as any other team in the country. There is no denying that fact. A lot of recruits want to play for Bama because it is a direct pipeline to the NFL. Every last one of Bama’s championships were EARNED, not bought. You don’t have to like Alabama, but you all could at least give those young men credit where credit is due. They’ve earned it. We should all be able to do that much, if nothing else. As far as Saban goes, I bet you wouldn’t be saying jack if he were your head coach

For the guy that claims Alabama has no beach etc to offer a student/ athlete for them signing…hmmm…I take it you don’t consider the student/ athletes future a solid enough reason to come to Alabama? They stand a better chance of being part of a National Championship team. They get noticed more often by Pro scouts. So their chances of doing what they love (playing football) for a living is dramatically increased. So…none of these reasons are enough to choose Alabama as their school of choice? The beach…I still can’t get over that one…lol

Yeah, Alabama is so scared to play Cincinnati that we play USC, Wisconsin, West Virginia, Florida State, Michigan… Yeah I see your point. That being you’re probably just some kind of Auburn crazed fanatic that jerks it to a life sized eagle statue.