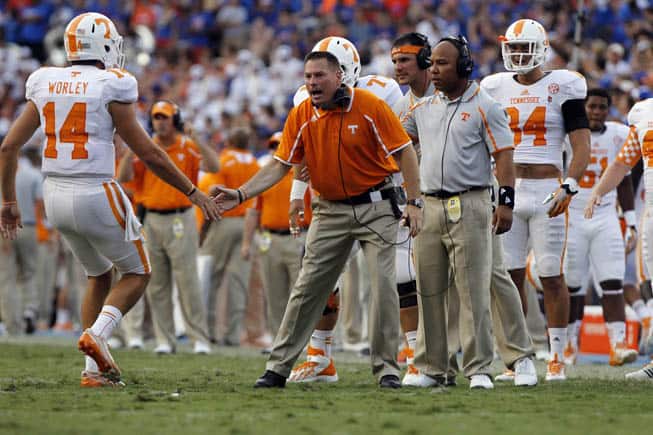 The SEC often gets lambasted for its non-conference scheduling habits. Some teams in the conference deserve that criticism, while others don’t.

Around half of the conference has challenged themselves in 2014. However, teams such as Alabama and Texas A&M find themselves near the bottom of the rankings again this season.

Beginning in 2016, SEC teams will be required to schedule a non-conference game against a team from a Power Five conference. This season, four teams don’t play one – Ole Miss, Mississippi State, Texas A&M, and Vanderbilt.

Tennessee has the toughest non-conference schedule in the SEC in 2014. Not only do the Volunteers travel to Norman to face likely preseason Top 5 Oklahoma, they also host Utah State and Arkansas State, both good teams capable of pulling off an upset. The Vols close their non-conference slate with their first meeting against Chattanooga since 1969.

South Carolina opens the season with East Carolina, a non-conference opponent that has notched several wins over ACC teams the last few years. Furman and South Alabama won’t provide much of a challenge. The biggest game lies at the end of the season at Clemson. However, the Gamecocks have taken four in a row from the Tigers in Death Valley.

Georgia and South Carolina were neck-and-neck for 2nd and 3rd, but the Bulldogs fall here due to playing Clemson at home to open the season while the Gamecocks play in Death Valley. UGA will handle Troy and Charleston Southern easily. In-state rival Georgia Tech awaits in the regular season finale.

On the surface, Missouri’s 2014 non-conference slate looks easy. But a closer look reveals that its actually in the top half of the rankings. South Dakota State is a good FCS program, while Toledo is a respectable MAC program and the game is at the Glass Bowl. Mizzou then hosts UCF, who finished 12-1 last season with a Fiesta Bowl victory. Missouri closes with a hopeful Indiana squad, although the Tigers beat the Hoosiers 45-28 in Bloomington last season.

LSU has a big season-opener vs. Wisconsin at Reliant Stadium in Houston, but their non-conference difficulty tapers off after that. The Tigers host their other three non-league games at home. SHSU, one of the better FCS programs, will be breaking in a new head coach. ULM slipped back last season, while NMSU continues to flounder at the bottom of the FBS.

Arkansas, which is rebuilding under Bret Bielema, has what I consider the toughest overall schedule in 2014. Their non-conference slate is anchored by a trip to Texas Tech and a visit from Northern Illinois, perhaps the top program in the MAC. The Hogs should be able to handle Nicholls State and UAB with ease.

Kentucky’s 2014 slate is pretty manageable, save for a trip to in-state rival Louisville to close the season. The Wildcats warm up with UT Martin to kick off the season, and they could be tested by Ohio and ULM.

Highlighting Auburn’s non-SEC slate is a rare trip to Big 12 country to take on Kansas State. That game, which has already sold out, takes place on a Thursday night. The Tigers host two other respectable teams, San Jose State and Louisiana Tech, and then take a break against Samford before the Iron Bowl.

Ole Miss makes their first appearance in the Chick-fil-A Kickoff Game against Boise State, which beat Georgia in the 2011 game. Ole Miss later hosts a good Ragin’ Cajun team that has won three straight bowl games. Memphis and Presbyterian shouldn’t pose much of a challenge.

Florida’s first three non-conference games are just about as weak as they come. Idaho and Eastern Michigan are struggling, while Eastern Kentucky has missed the FCS Playoffs the last two seasons. The only thing that saves Florida’s strength of schedule is their annual rivalry game against Florida State, and this year it’s in Tallahassee. And the ‘Noles will likely be the preseason No. 1 when the rankings come out.

Alabama kicks off the 2014 season against West Virginia in Atlanta, which will be the third straight year the Crimson Tide have opened with a neutral site game. Bama will cruise against FAU, Southern Miss, and Western Carolina. The Crimson Tide haven’t faced two power-five non-conference opponents in the same season since 2010 when they hosted Penn State and played at Duke.

The Aggies have yet to face a power-five team in the non-conference since joining the SEC. That’s partly due to them having to add a fourth non-league game on short notice. This year’s slate is mediocre, with Lamar leading things off. Texas A&M does travel to SMU, but the Mustangs aren’t expected to do much this year. Rice is the reigning C-USA champion, but the Aggies beat them 52-31 last season.

Mississippi State often sets up their non-conference schedule for bowl eligibility, and this season is no different. A trip to South Alabama will be the most difficult game on their slate, which really isn’t saying much. The Bulldogs should have no trouble with Southern Miss, UAB, and UT Martin.

For the second consecutive season, Vanderbilt gets the distinct honor of having the worst non-conference schedule in the SEC. It was, however, a close race with Mississippi State. The Commodores host all of their non-conference games at home. One is FCS, while the other three rank in the bottom of the FBS.

I think you are, more or less, splitting hairs with some of these mid major schools – saying some are respectable and others terrible. There are a few that are a cut above the rest, UCF and Boise State stick out to me. The rest are just – meh. Some will be good one season, then fall apart the next. I think Florida should be much higher just by playing Florida State on the road. Before the season starts, that looks like the toughest game you could design for a team this season.

They play NC State, too. I think both Old Dominion and Georgia Southern will upset NC State up there. When they come out with toughest non-conference ACC schedules I wonder how the writers here will perceive these two programs.

Vanderbilt, Mississippi, Ole Miss and Texas A & M must have gone to the Baylor school of scheduling out of conference. How come none of them picked up on Incarnate Word?

Has anyone here looked at Florida Atlantic’s schedule this year? Talk about a rough start to the season. Shame on Alabama picking on poor FAU! Ha! It’s quite disappointing to see that 3 SEC schools don’t play a single true OOC road game, 2 that all OOC games are at home (but to Georgia’s credit their the only SEC team with 2 P5 games), and 3 that don’t even have a single P5 opponent in non-conference play. I’ll tell you what though, it will be interesting to see East Carolina vs South Carolina. The Pirates better be prepared for this match-up, for if not the Gamecocks are going to have a field day but as long as it doesn’t look like the Coastal Carolina game from last season ECU should be fine.

Georgia is 3rd while Auburn is 8th? Bias much? Auburn should be ranked first!

THE SEC IS SOOO OVERRATED. CLEMSON WOULD BEAT ANY SEC TEAM BY TWO TOUCHDOWNS WITH DESHAUN WATSON AT QB. THE MEDIA JUST LOVES THE SECHEAT. LOOK AT THEIR OUT OF CONFERENCE SCHEDULING, IT IS A JOKE. WE HAD ONE BAD QUARTER AGAINST GEORGIA. AND TONY STEWARD WAS OBVIOUSLY HELD ON GURLEY’S 54 YD TD RUN. NOBODY FROM SEC WOULD WANT TO PLAY CLEMSON WITH OUR DEFENSE, WHICH IS THE BEST IN THE COUNTRY, AND A HEALTHY DESHAUN WATSON RIGHT NOW. I HOPE WE GET TO PLAY BAMA IN ORANGE BOWL!

They all should be tied for last

I agree Auburn should be higher. Not 1st, but San Jose and La Tech are almost always good. The only laugher is Samford. The only other 2 teams with just 1 easy one are Missouri and Tennessee. Maybe count Georgia since Troy is usually good. I would rank it Tenn #1, Georgia #2, Auburn #3 and Mizz #4.

I hate the SEC as much as anyone, but are you people delusional??? They obviously OWN the college football world…and not because they are “favored” in any way, but because they are just plain better. It took a full DECADE for any other team from another conference to barely win a NCG?!?!?! Plus, all this BS about them not playing enough OOC schools…yea, sure…I bet the SEC teams would loooooove another chance to shove our faces in the dirt. Like Bama did with West Virginia already, Auburn embarrassed Kanaas St on the road, LSU completely worked Wisconsin on a neutral field, Arkansas beat Texas Tech in Texas, Georgia killed Clemson, and these teams also have to get thru the most serious gauntlet of a college football schedule week in and out, too. Really what more “proof” do you need, Jimbob? You seem to not care that teams like Ohio St. and FSU can play “practice teams” every week and coast into to Big Game. Seriously, wake up and don’t be a sore loser!

KILLED CLEMSON. WE DOMINATED THE FIRST HALF. MISSED A 23 YD FIELD GOAL TO TAKE THE LEAD GOING IN AT HALF. WE WOULD CRUSH GEORGIA IN 2 WEEKS WHEN WATSON RETURNS. BUT I ADMIT THE SEC IS THE BEST CONFERENCE IN FOOTBALL. NOT FOR LONG THOUGH. WE “CRUSHED” GEORGIA LAST YEAR. (LATE SCORE MADE IT LOOK CLOSER) AND BEAT LSU THE YEAR BEFORE THAT. AND SOUTH CAROLINA IS GONNA GET THEIR’S THIS YEAR. #2 RECRUITING CLASS COMING IN. WE WILL WIN A NATIONAL CHAMPIONSHIP IN THE NEXT 2 YEARS.

Yes the SEC has its own way of doing things the way they schedule their non-con games. The non-con stands for non-confrontation. Can’t wait to see Alabama vs East Cupcake State. It’s like making your own moonshine, telling everyone how great it is, but never letting outside your kin taste it!!