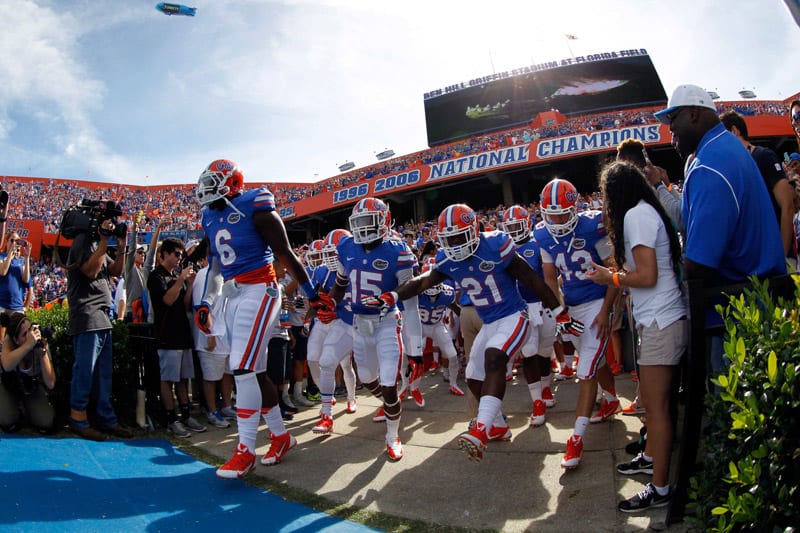 Would you rather your college football team play Alabama or Ole Miss?

Though the question sounds almost ludicrous—because it is—it sums up the importance of cross-division scheduling: it can be the difference between a solid chance of winning and a high-percentage chance of losing.

While the SEC has set permanent, cross-division rivalries—which account for one such game each season— five other conferences with two divisions have yet to do so, meaning that members could draw any endless combination of opponent’s from the other side of the league.

Where one Pac-12 South team will pull Oregon, the other will draw Washington State. It’s yet another scheduling caveat that reminds us that one 8-4 record isn’t equal to another 8-4 mark, even among teams from the same conference.

Here’s a look at the 12 most difficult cross-division slates for 2014. These programs will all have a more difficult path to bowl eligibility, much less any sort of title.

Even though the Bruins have the benefit of drawing Cal—the Golden Bears went 1-11 last season—they also have the top three finishers from last year’s North division race. Oregon, Stanford and Washington combined for a 31-9 record last season and are all ranked in the preseason Coaches’ Poll this year.

UCLA has dropped five straight to Oregon and last beat the Ducks in 2007. It’s 0-6 in its last six tries against Stanford, last winning in 2008. The Bruins beat Washington 41-31 last season and are 8-2 in their last 10 games with the Huskies.

Whoever put together Rutgers’ “Welcome to the Big Ten” gift basket was thoughtful enough to make sure it played the two best teams from the new West division. Why play Illinois and Minnesota—like Ohio State will in 2014—when you can crank things up at Nebraska and vs. Wisconsin?

The only time the Scarlet Knights have ever faced the Cornhuskers was in 1920 in New York City, a game they lost 28-0. Rutgers has never squared off with Wisconsin in football.

Even though Michigan looks less intimidating after its 7-6 finish last season, the Wolverines have only lost two games in the Big House since Brady Hoke took over in 2011. Add in a home date with Ohio State and Minnesota’s East division games look way scarier than say, Wisconsin, who drew Maryland and Rutgers this season.

Of the three winning teams from last season’s MAC West division, Kent State will play two in 2014. Northern Illinois and Toledo combined to go 19-7 in 2013, a fiercer duo than 8-16 Eastern Michigan and Central Michigan—Buffalo’s two West opponents this season.

Kent State has dropped seven straight to Northern Illinois, last winning in 2001. The Golden Flashes are 1-6 in their last seven games vs. Toledo, the most recent win coming in 2006.

Illinois improved from 2-10 in 2012 to 4-8 in 2013, any further progress will be made more difficult with games at Ohio State and vs. Penn State slated for this season. Add in road trips to fellow West members Nebraska and Wisconsin and the situation looks even more sinister.

The Illini haven’t won in Columbus since 2007, which also marked their only win against Ohio State in the last 10 tries. Illinois has only beat Penn State four times in history, the most recent coming in 2010.

Auburn’s permanent, cross-division rival is Georgia, who it will have to deal with on a yearly basis. That leaves South Carolina as the “other” team it draws from the East in 2014. This shakes out to Auburn facing—along with the entire SEC West—the No. 9 and No. 12 ranked teams from the preseason Coaches’ poll.

The Tigers beat the Bulldogs 43-38 last season in Auburn and are 9-1-1 all-time against South Carolina. Their only loss to the Gamecocks came 81-years ago in 1933.

Arkansas’ permanent rival from the East is Missouri, which just so happened to go 12-2 and win the division last season. Other than that, the Razorbacks will have to try and improve on their 3-9 mark by welcoming Georgia to Little Rock in Week 8, just after hosting Alabama in Fayetteville.

Arkansas hasn’t won a game against an SEC opponent since beating Kentucky on Oct. 13, 2012. Its last win against Missouri came in the 2003 Independence Bowl and the Razorbacks last beat Georgia in 2010.

Texas A&M is permanently linked to South Carolina, even though the two teams have never met before in football. That leaves Missouri, which was supposed to be the Aggies intended, to complete A&M’s 2014 slate against the East. The Gamecocks and Tigers combined for a 23-4 record last season.

Though the Aggies pounded Missouri 59-29 in College Station in 2012, that was A&M’s only win in its last five tries. The Tigers won the most recent meeting—just last season—28-21 in Columbia.

Other than its fixed date with Texas A&M, South Carolina’s other West game in 2014 is with Auburn, a team it’s only beaten once in nine tries.

Florida State and Louisville only lost one game between them last season, a 38-35 Cardinal loss to UCF, who went on to finish 12-1 and beat No. 6 Baylor in the BCS Fiesta Bowl. If Miami is going to improve on its 9-4 record from last season under fourth-year head coach Al Golden, it will earn every bit of it.

The Hurricanes were 9-0-1 against Louisville until losing to the Cardinals during the 2006 regular season and then again in last year’s Russell Athletic Bowl. Miami has dropped four straight to the Seminoles, last winning in 2009 in Tallahassee. Its last win at home against Florida State was a decade ago in 2004.

Virginia has posted a winning record only once the past six years and its 2-10 finish last season marked the Cavaliers worst performance since 1982.   Virginia drawing Louisville and Florida State from the Atlantic seems grossly unjust, especially in light of Virginia Tech’s cross-division showdowns with Boston College and Wake Forest.

The Cavaliers have only played Louisville twice in history, in a 1988-89 home-and-home series it split 1-1 with the Cardinals. The Cavaliers are 3-14 all-time against Florida State but won two of the last four. The two teams last met in 2011, a game Virginia won 14-13 in Tallahassee.

Since Florida and LSU are in an official, annual relationship, Alabama represents the team the Gators were lucky enough to draw from the West in 2014. No matter how you slice it, playing Alabama and LSU in the same year is no picnic. Especially when you’ve also got the entire SEC East and Florida State on your schedule.

The Gators haven’t beaten the Crimson Tide since the 2008 SEC title game when Urban Meyer was still running the show. The last win over LSU came in 2012 when Florida scored a 14-6 win in Gainesville.

Mizzou plays @Toledo, vs. UCF and vs. Indiana. I gotta think that is tougher than @ UNI and vs. Toledo?

Those Mizzou games are non-conference games. These are non-division games in SAME conference.

Who said anything about Northern Iowa?

Having a MAC team anywhere on this list is just asinine.

Hey, when you get two of top three teams in other division of your conference, it’s noteworthy.

Nobody is saying that Kent State’s two opponents, NIU and Toledo, are better than the opponents of the teams ranked lower. It’s relative to Kent State. They got the toughest draw from their conference.

Guess I just disagree that NIU will be some daunting, unbeatable force without Lynch. Maybe go with Utah who has to play at Stanford, at Oregon State, & Oregon at home… PAC-12 should be at least the 3rd, possibly the 2nd best conference in the nation.

Nobody thought NIU would be tough after Chandler Harnish left either… NIU returns its entire offense besides the QB spot. Defense will be the real challenge.

I’m not so sure, the Gators still have a chance of at least winning 6 ( I predict 8 because programs such as UF don’t stay down for long) or more for they are capable of pulling an upset. Now when I say upset I’m referring to their division, highly doubt they’ll upset Bama or the Noles but LSU at home they might just pull off; however, that is still a big maybe.

UCLA and USC get Stanford and Cal every season, so they didn’t really “draw” them. It’s a tough go but on balance it’s good to have these rivals play every year

Stop crying about the gaytors! when was the last time they played a non conference road game out of the state?

This is a good article, a lot of these games should be must see. Also, I do love the little tid-bits of information regarding history between programs before the 90’s (before I was born, yes yes I’m a youngin) and between the 90’s and 2010 (before I really got hooked on college football) for the history of college and professional Football is quite fascinating, even though I end up forgetting most of this $#!% (dang high school party years!).

I would say Auburn playing SC and Uga is the toughest

doesnt matter a bit.sec is best conference…sure. but they all play a ridiculous non conference slate . theyd be better off playing local high school teams!

UVA will win only 3 games.