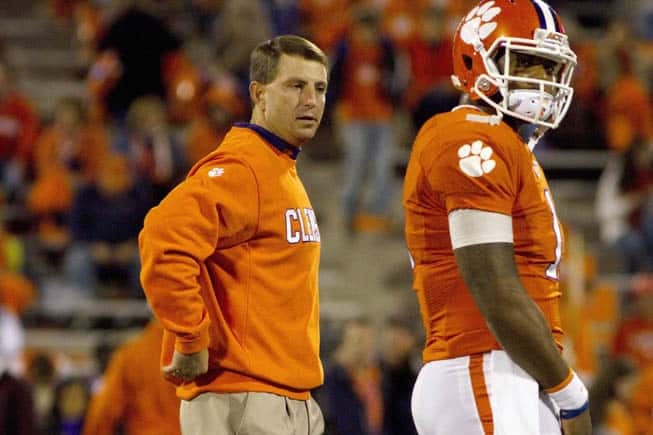 There really isn’t much to dive into here, to be honest. One things for sure, the Blue Devils should be on track for another bowl appearance after this slate of games. The toughest game is the last one, the visit from Navy. Navy, at 8-5, is the only team that Duke scheduled out of conference with a winning record.

This is the only other remaining schedule that doesn’t have a BCS opponent on it, not counting Notre Dame. We’ve covered in previous editions that Louisiana Tech can score, and score in bunches. That by itself isn’t enough to move this schedule up any farther. Louisiana Tech is the toughest game, followed closely by an eight win Purple Pirate team. First year head coach Dave Doeren should be able to get out of this unscathed.

Two BCS names in West Virginia and Connecticut, but those teams talents haven’t transferred to the field lately. With the spectacular Geno Smith the Mountaineers mustered seven wins last year. That’s the toughest game on this schedule. FIU and ODU will be easy games for the Terps to get their footing, but games used to “get footing” do not translate into tough schedules. The Terps could go 2-2, but 4-0 is also very possible. I predict a slip on the road to Connecticut, though. 3-1 will be the final mark.

Boston College better get ready to cash their frequent flyer miles in. Going to play in the hostile confines of Los Angeles Memorial Stadium is never easy, and that’s the game that jumps out on this schedule to put it this high on the list. I was tempted to put Maryland above the Eagles, but I couldn’t make myself do it. As terrible as New Mexico State is, the tough trip to the City of Angels takes the cake.

For the next few spots in the rankings it simply comes down to which BCS opponent is better. Traveling to Nashville to play in Vanderbilt Stadium isn’t exactly one of the toughest places to play in the nation, but the Commodores have a pretty solid football team. Army looks to be a glorified scrimmage as the Demon Deacons play the same offense in Georgia Tech the week after, so they won’t be overlooked. ULM, as we’ve covered, always plays good out of conference. This could be a scare for Wake, but I think ultimately the Demon Deacons don’t overlook the Warhawks, either. 3-1 is a likely result after these four games.

See what I mean about the BCS team? Miami has a very comparable schedule to Wake Forest, except that Florida is better and a tougher game than Wake Forest. I predicted in the AAC rankings that USF wouldn’t be able to beat Miami this year after they got blown out last year, and I stand by that. Once again, 3-1 with a loss to the SEC looks like the way this will shake out.

The FSU faithful was not very happy when this schedule got released. Aside from the usual rivalry game with the Gators, nothing stands out. There’s not much to break down here. The stat padding visit from the Idaho Vandals the week before their trip to Gainesville will be a welcome break, that’s for sure. If FSU can avenge their loss from last year in Tallahassee, then they should be able to go 4-0. That’s not going to happen, though. 3-1 for the Noles it is.

First instinct makes me put this schedule towards the top. Traveling to Provo is not an easy task, and then you’ve got Clean Old Fashioned Hate in Atlanta. Those two games are extremely strong and tough, but Elon and Alabama A&M just kills the slate. Two FCS teams get a pass if the two other teams are great. Georgia is, but BYU is just good.

One great team, two decent ones and one that is just plain bad. That’s what North Carolina is working with. I look for North Carolina to have a shot at ending the theme of SEC teams beating ACC teams in this article, but it’s not going to happen. The remaining three games being at home play into the Tar Heels hands, and they shouldn’t have a problem with any one of them. Look for another 3-1 mark after this slate is all said and done.

Pittsburgh used a common trick in the ACC this year by scheduling ODU,a team in transition to the FBS. This is ODU’s final year in the FCS, as they are moving to Conference USA in 2014. The popular consensus is that the Panthers schedule should move up by one place in these rankings because of Notre Dame, but we’ll see in a second why Notre Dame finishes second again.

Just like in the national title game, Alabama overcomes Notre Dame again. Opening in Atlanta against Alabama is the toughest opening game on any schedule this year. Its quite simple when you think about it: Alabama is better than Notre Dame. The Panthers cast of mid-majors may be a touch better, but it’s not enough to overcome the A-List Crimson Tide.

If Syracuse was traveling to Penn State instead of Northwestern, then they would have slid up a spot past Virginia. Location is a big key in deciding these rankings, though. Even with that said, the sleeper here is Northwestern. The Wildcats could possibly challenge for a division title this year in the Big Ten. If Syracuse is satisfied coming off of a victory against the Nittany Lions, the Wildcats and that spread offense will take them by surprise. This schedule is not set up well for the Orange, overall. Syracuse could easily come out of this 2-2.

Oregon was three points away from a possible national title game appearance and BYU was an eight win team. How does this schedule top Syracuse’s, you ask? Ball State. Ball State was one of the better mid-major teams in the nation last year, with nine wins. Tulane doesn’t stack up against the Cardinals. While Penn State and Northwestern is a good combo, the BYU, Oregon and Ball State trio wins out.

It really pains me to say a schedule with two FCS teams is the toughest, but it’s the nature of the beast. This is what I meant by two great teams cancel out two FCS teams, by the way. It should be noted that Clemson previously had games scheduled against Central Michigan and Kent State, but had to cancel them in preparation for a nine-game ACC schedule that was later switched back to eight.

Playing UGA — the same team that was four yards away from the national title game — and traveling to Williams-Brice Stadium is arguably the toughest tandem of non-conference games in the nation.

LOL Even in a likely “down” year WVU is still better than Maryland , the streak will go on to 8 !

Who cares….only people from No tooth U and Turttle U will watch that game.

I hear they teach spelling in the B1G. Gonna leave those ACC hillbillies behind

dude. if you think WVU is gonna keep that streak. your blind. even with Geno and company, they geat MD by 10 pts and MD only gotten better. cant say that for WVU…

Regarding Maryland: It’s always funny to look at these schedules at this time of year and see how easy they look on paper, but then I remembered that Maryland just barely beat William & Mary at home last year 7-6. And Duke has the fantastic reputation of losing to D II schools over the years like Richmond. I completely agree with your rankings, but it’ll be fun to see which of these ACC schools slip up against so-called weaker opponents.

Richmond is not a Division 2 school. They are Division 1 FCS.

Correct. I was thinking of the old school I, II, III divisions.

Wow you really are old school, as Richmond has been classified as major since they joined the Southern Conference in 1936.

Research fail on the Pitt section: Old Dominion is still FCS this year, not FBS. They don’t join FBS/C-USA until next year.

Thanks, edit that. We both missed it.

most of these are shit schedules

Virginia have a tougher schedule than Clemson.

But Clemson have a better command of the English language.

Good analysis!! My only question with the overall rankings is why is Pitt’s ranked 5th and Miami’s ranked 9th in this article. Miami has Florida at home and USF on the road while Pitt has Notre Dame at home and Navy on the road. Seems to be they are very equal in quality.

The ACC dropped a conference game with the addition of 5 games vs Notre Dame moving forward. In doing so they caused more FCS games on the 2013 schedule. So the schools deserve a pass for the most part.

That being said Virginia has the toughest schedule because they have 3 probable losses while Clemson has 2 guaranteed wins.

This was written almost a year ago. Don’t remember seeing anyone predicting FSU would go undefeated. Not counting their fans, of course.