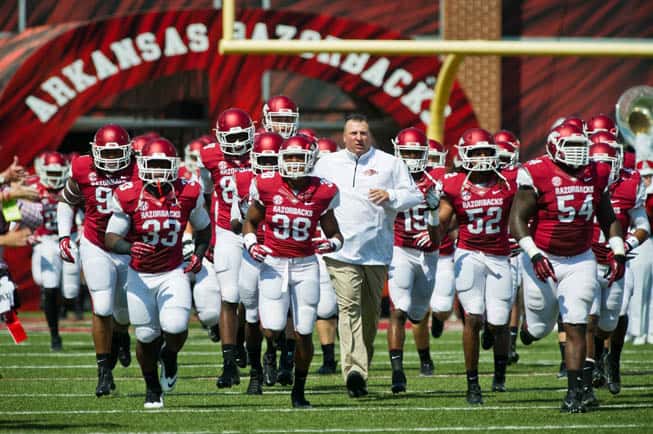 Arkansas has the toughest 2014 schedule in our ranking. (Beth Hall-USA TODAY Sports)

Strength of schedule will be a factor in determining the four-team field for the College Football Playoff, which debuts this season. Unknown, however, is exactly what weight it will carry in the eyes of the selection committee.

Several teams in FBSchedules.com’s 2014 preseason strength of schedule rankings are considered legitimate contenders to make the playoff field, but first they must successfully manage their difficult run of games. As expected, the Southeastern Conference dominates the rankings, taking the top three spots and four of the top five.

Among the criteria used to determine the rankings: opponents’ won-lost record from last season, games against probable preseason top 25 foes and game sites.

Note: The NCAA uses only opponent wins and losses in their strength of schedule calculation. Their ranking can be found here.

Coach Bret Bielema was welcomed to the SEC last season with one of the nation’s most demanding schedules. This year’s slate is even tougher. Arkansas kicks off with a rare opening-day SEC game – and it’s at Auburn against the defending conference champion Tigers, a probable top five team. The Razorbacks then take a break from SEC action with challenging matchups at Texas Tech and at home against Northern Illinois. The Hogs then enter a tough stretch of games against Texas A&M (at Arlington, Texas), Alabama (at home) and Georgia (at Little Rock, Ark.). It doesn’t get easier late in the season with three more games against likely top 25 teams: LSU and Ole Miss at home and Missouri on the road.

After playing Utah State and Arkansas State at home, the Vols play at Oklahoma. Two weeks later, their conference schedule starts with a bang at Georgia, followed by a visit from Florida. The Vols later play consecutive games against likely preseason top 10 teams Alabama and South Carolina, the latter on the road. Late in November, they host Missouri before closing the regular season at Vanderbilt.

Florida eases into its schedule with home games against Idaho and Eastern Michigan and its SEC opener against Kentucky. But then it gets tough: trips to Alabama and, after an open date, Tennessee. The Gators then host LSU and Missouri. Then it’s rival Georgia in Jacksonville, followed by a trip to Vanderbilt and a visit from South Carolina. Florida closes its season at Florida State.

Stanford gets a warm-up against UC Davis in Week 1 before diving into Pac-12 play at home against USC in Week 2. After a visit from Army and an open date, the Cardinal makes trips to Washington and Notre Dame in consecutive weeks. That’s followed by games against Washington State, at Arizona State and against Oregon State. Their two toughest games will be played on the road: against likely top 10 foes Oregon and UCLA, the latter in the season finale.

In order to return to the national championship game, Auburn must survive a schedule that includes games against five preseason Top 25 opponents. A rare opening-day SEC game against Arkansas kicks things off. Then, after a visit from San Jose State and an open date, the Tigers travel to Kansas State for a Thursday night game. The Tigers then return home to host Louisiana Tech and LSU. Finally, in their last five SEC games, they’ll play South Carolina, Ole Miss, Texas A&M, Georgia and Alabama. And they’ll play three of the five, including the season-ending “Iron Bowl” at Alabama, on the road.

Notre Dame kicks off a scheduling agreement with the Atlantic Coast Conference this season. The Fighting Irish will play four ACC opponents, including Florida State at Tallahassee. The Irish also host Louisville and North Carolina and play Syracuse at East Rutherford, N.J. (The arrangement calls for five ACC opponents each year, but the Irish will play four in 2014 and six in 2015.) They open the season at home against Rice and Michigan before taking on Purdue in their Shamrock Series game at Indianapolis. Other tough games include Stanford at home, Arizona State and Southern California on the road and Navy at Landover, Md.

Texas A&M won’t ease into the post-Johnny Manziel era, playing at South Carolina on the first Thursday night of the season. After three nonconference games, the Aggies face Arkansas at Arlington, Texas, before traveling to Mississippi State. They play five of their last six games against probable top 25 opponents, starting with Ole Miss at home and Alabama on the road. After a visit from Louisiana-Monroe, they’ll travel to Auburn and host Missouri. On Thanksgiving, the Aggies will close the regular season at home against LSU.

Utah opens with three nonconference games, the second at home against Fresno State and the third at Michigan. The Utes begin Pac-12 play at home against Washington State before traveling to face UCLA at the Rose Bowl. After an open date, Utah closes with seven more conference games, including home dates against USC and Oregon and road games at Arizona State and Stanford.

South Carolina opens the season with three consecutive home games, a stretch that figures to be more challenging than it sounds. After facing Texas A&M in their opener, the Gamecocks host a good East Carolina team and Georgia, a probable top 25 opponent. Two weeks later, after a trip to Vanderbilt, they’ll play Missouri. Later in the season, the Gamecocks will be on the road for games against Auburn, Florida and Clemson, the last to end the season.

Like Tennessee and Texas A&M, West Virginia plays three opponents that probably will be ranked among the preseason top 10. The first is Alabama in its opener at Atlanta. Then, after hosting Towson and playing at Maryland, the Mountaineers return home to open Big 12 play against Oklahoma, another likely top 10 team. Later, they play a tough five-game stretch: at Texas Tech, vs. possible top 10 Baylor, at Oklahoma State, vs. TCU and at Texas. The Mountaineers close the season with games against Kansas State and at Iowa State.

This article appeared on page 40-41 of the USA TODAY Sports College Football 2014 magazine.

6 of the top 10 toughest schedules…what more do you SEC haters need?

Oh, I don’t know. Maybe it has something to do with them still playing an 8 game conference schedule. And the SEC OOC scheduling is always beyond pathetic. For example, the first team on this list – Arkansas – plays Nicholls State, Northern Illinois and UAB?? How the hell do you come up with the #1 toughest schedule playing those teams and an 8 game conference schedule?

Arkansas always plays a difficult schedule, but last year was probably the easiest we’ve played in many years.

so, ACC or Big 8 or what ever they call themselves now.

Using last year’s record is probably not the best indicator of who has the toughest schedule this season. For example if Missouri was on your schedule last season you were probably not too depressed as they went 5-7 in 2012. However, they turned out to be pretty good in 2013.

It’s used as a reference and guide, but is not the only factor used.

From the looks of this, I would say that Auburn, Florida, and Stanford should be at the bottom of the list, especially Stanford. Those schools have won +40% of those games against their opponents for this season (Auburn look like they fell a lil short). Now, I haven’t taking location into a factor, so maybe that’s why the list is, what it is.

I don’t know what you been smoking but playing 5 teams that are top 15 preseason picks including #1 Florida State and #2 Alabama on the road, Georgia at a neutral site, and LSU and South Carolina at home I can’t see moving Florida down any. They also play Missouri who is rated #26 at home and play Tennesee on the road.

Get off the sec’s balls.

Auburn is scheduled to play 7 top 25 teams this season. which little girl school does YOUR team play?

How can you rank Notre Dame only 6th when their opponents 2013 combined won-lost record is much higher than four of the teams you ranked higher than them? Also, ND plays five teams in the pre-season top 25 rankings. Surely those two factors should weigh more heavily than what you’ve accorded them.

The won-lost record is only used as a guide. After all, the records are from the previous season. Also, no rankings were out when this was written.

The real question is how the SE buys 3 out of 4 spots in the tournament this year so they can lock another championship down .

Arkansas plays 7 teams ranked in the top 25 and every one of them, are from the SEC! The beat league in college football bar-none. Five of which are in the top twenty. Although Georgia along with LSU should and will be in the top ten if not top five before it’s all said and done. Take the bias equation out of it and use logic and you too will see that the SEC the best conference. Just sayin brah.

Time for the SEC to have a 9-game conference schedule. I don’t buy that 6 of them have the hardest SOS when they drop a tough game for Savannah state in November.

I would like to hear from any other team cheerleader from a school that plays 7 or more ranked opponents this season… AUBURN DOES!
Anyone?

Texas A&M isn’t a ranked team and by the time you reach Georgia in your schedule they may have already dropped out of the top 25. Therefor 5-6 ranked teams, which countless teams play 5-7 ranked teams throught the year.

I would say the Razorbacks have played on of the toughest schedules I have ever seen…4 top teams already….#1 Miss St this weekend…and still have LSU and Ole Miss…with both still a possibility of being in the top 10…and, to end it with a Mizzou team that could be in the top 25. They have played a few teams tough, including bama and A&M…each game should make us better and I look for us improving even more next year…with a schedule that can’t get any tougher..WPS