The toughest and easiest schedule in each FBS conference in 2022 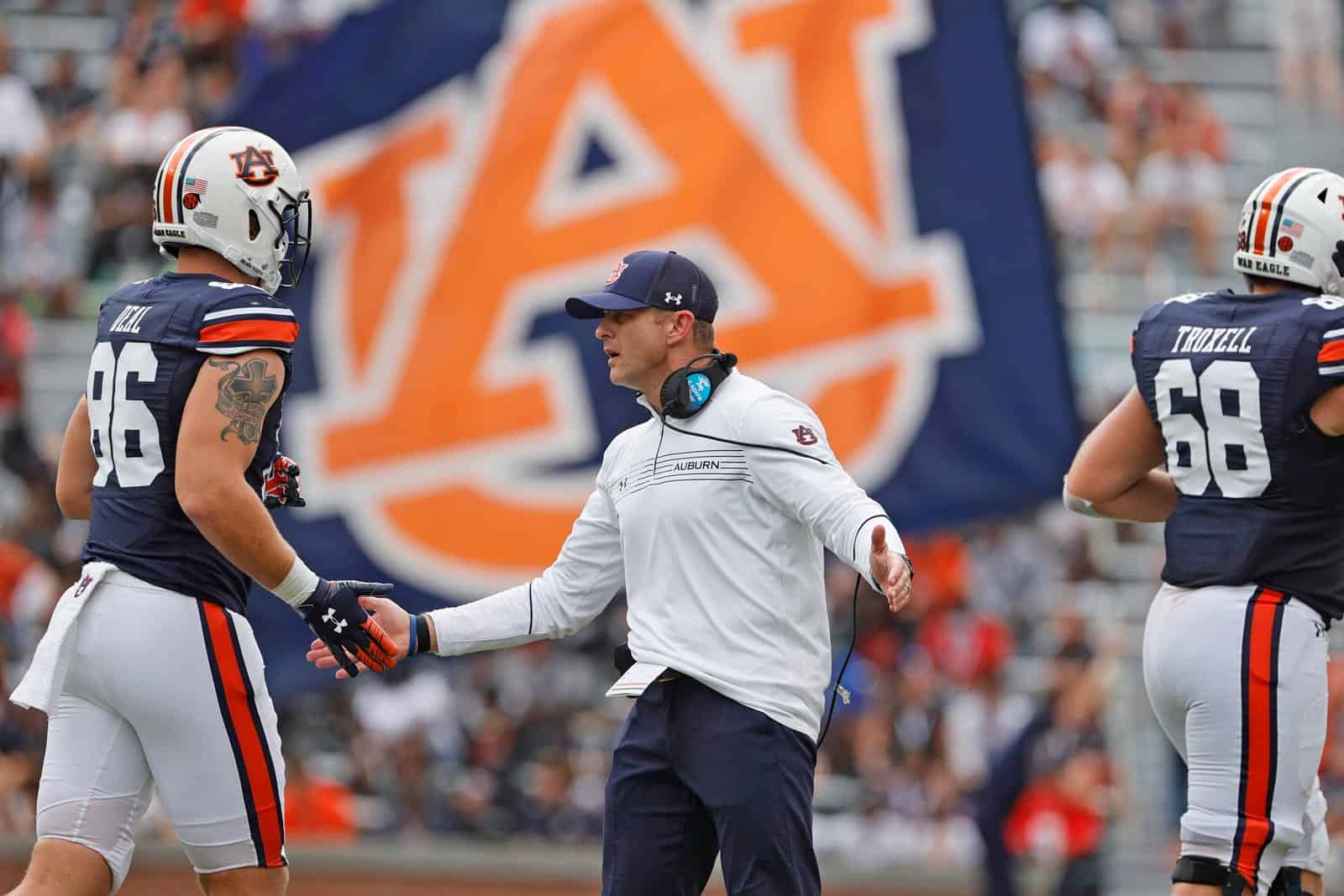 The release of Phil Steele’s preview magazine – the most comprehensive preseason publication in the business – means we’re one critical step nearer the kickoff of the 2022 season.

Among the dizzying array of statistical wizardry on offer are Steele’s strength of schedule rankings. Rather than relying exclusively on upcoming opponents’ win/loss records from the previous season (the NCAA’s methodology) his metrics also include such factors as teams’ power rankings for this season and the mix of home and away games.

What follows are, according to Steele’s calculations, the most and least difficult schedule in each of the ten FBS conferences.

The disparity between each pair of programs’ schedules is significant enough to change the entire course of the season.

Not only does Navy have the toughest schedule in the AAC – it has the most difficult slate among all Group of 5 clubs. The Midshipmen get Notre Dame in Baltimore and are on the road vs. Air Force where they’ve dropped four-straight. Without divisions in 2022, each AAC team will play eight of its ten fellow members. For Navy, it avoids Tulane and USF (each is predicted to finish at the bottom of the league) and draws top dogs Cincinnati and UCF, both on the road.

Houston does have a roadie at Texas Tech but meters that with a visit from Kansas, a program that’s won two games over the last two seasons. In conference play the Cougars manage to completely avoid playing Cincinnati and UCF during the regular season, a stroke of luck that may leave them blameless in league play.

The Yellow Jackets add a home date with Ole Miss to go along with their annual clash with Georgia (which is in Athens) in non-league play. The icing on the cake is a roadie at UCF, a club that’s No. 17 in Steele’s preseason Top 40. In ACC action, Tech adds a roadie to Florida State to its standing date with permanent (for now) cross-division rival Clemson and has two of the top dogs from its own Coastal division – Pitt and North Carolina – on the road.

Not only is Duke’s slate the least difficult in the ACC ranks – it’s the easiest among all Power 5 programs. The Blue Devils get Northwestern and Kansas on the road in non-conference action, programs that combined for a 5-19 record last year and who are both predicted to finish at the bottom of their leagues. From across the ACC in the Atlantic, Duke adds a road game at Boston College to its annual clash with Wake Forest (a home game) thereby avoiding frontrunners Clemson and NC State all together. It also draws North Carolina at home.

Though Indiana is one of seven Power programs not playing a Power opponent in non-conference play in 2022, it does have a roadie booked at Cincinnati, which will start the season as a Top 25 team. The real challenge for the Hoosiers comes within its own division, a Murder’s Row of opponents which includes consecutive games in November vs. Penn State, at Ohio State and at Michigan State.

Minnesota’s only real threat outside of Big Ten play is a home date with Colorado, a program that’s suffered with a losing record in four of the last five seasons. From across the conference in the East, the Gophers do draw Michigan State and Penn State (both on the road) but completely avoid big guns Ohio State and Michigan. They also get Iowa – who they haven’t beaten on the road since 1999 – at home in Minneapolis.

Texas’ schedule is front-loaded, giving it little time to ramp up for a possible improvement on its 5-7 mark in Steve Sarkisian’s debut campaign. Things get started with a blockbuster Week 2 visit from Alabama which is immediately followed by what looks like, at least on the surface, a pair of non-threats – a home date with UTSA (the reigning C-USA champs who posted a 12-2 record in 2021) and a roadie at Texas Tech (a club with a new, enthusiastic head coach eager to enflame a fan base which is already en fuego about the Longhorns’ – the coattail of all coattails – pending move to the SEC). That leads directly to the neutral appearance vs. Oklahoma, a home date against Iowa State and a roadie at Big 12 frontrunner Oklahoma State.

Speaking of the Cowboys, their big non-conference challenge is Arizona State, an uber young team which Steele has ranked No. 126 out of the 131 FBS teams in 2022 in experience. OSU does get both Oklahoma and Baylor on the road but will play Texas and Iowa State at home in Stillwater.

Rice’s non-conference schedule won’t do it any favors in its quest to snap a seven-season run of losing campaigns. The Owls kickoff the season at USC and then after a Week 2 visit from FCS McNeese State host Louisiana and travel across town to face Houston. Combined the Cajuns and Cougars went 25-3 last season. Conference USA, like the American, drops its divisional format in 2022, meaning each squad will play eight of its ten fellow members. For Rice, it draws top dogs UAB, UTSA, UTEP and WKU avoiding only FIU (predicted to finish last in the league) and Middle Tennessee.

At the other end of the spectrum is Florida International which has the easiest schedule among all FBS programs. The Panthers won’t play a Power 5 opponent in non-league play instead booking FCS Bryant, Texas State, and New Mexico State (the Bobcats and Aggies combined for a 6-18 record last year). In C-USA action, FIU does draw UTSA, UTEP, and WKU, but avoids UAB. Holy acronyms!

Kent State may have the most difficult non-conference slate in the FBS with roadies at Washington, Oklahoma, and Georgia – all before the end of September. In MAC-tion, the Golden Flashes draw top dog Toledo in cross-division play and get Miami OH – which is predicted at the top of the heap in the East – on the road. Kent State will also play seven of its 12 games away from home.

Buffalo does have two tough non-MAC opponents in Maryland and Coastal Carolina, but that challenge is tempered with FCS Holy Cross and UMass. The Bulls, like the Flashes, also draw Toledo from the West but again get a respite with games at Eastern Michigan and Central Michigan.

Headlined by games at Oregon State and at UTEP, Boise State’s non-league lineup isn’t the meat of its schedule. Instead, the difficulty lies in its Mountain West slate where it draws Fresno State and San Diego State – predicted to finish first and second – from across the league in the West. The Broncos also get Air Force, which is expected to challenge for the divisional crown in the Mountain – on the road.

The Falcons add Colorado to their standing dates with Army (in Arlington, Texas) and Navy (at home in Colorado Springs) but they get the Buffs at home. Though they do draw San Diego State from the West, they more than make up for that with games vs. Nevada and UNLV, both predicted to finish in the bottom half of the division.

Not only does Stanford get Notre Dame on the road in 2022, it adds a non-conference game vs. BYU – a program that’s achieved a 21-4 mark over its last two campaigns. In cross-division play, the Cardinal is set to play all three of the top contenders in the South, at Utah, vs. USC and at UCLA. It’s also got Oregon and Washington – the big dogs in the North – on the road.

UCLA, like Indiana, is one the seven Power clubs without a Power non-conference opponent in 2022, instead lessening its load with home games vs. Bowling Green, South Alabama, and FCS Alabama State. From the North division, the Bruins do draw Oregon (on the road) and Washington (at home) but pair those games with Stanford and Cal, both of which are predicted to finish in the bottom half of the division. They also get Utah and USC at home in Pasadena.

Auburn’s big test in non-league play is Penn State, which it gets at home in Week 3. What makes the Tigers’ schedule the toughest in the entire nation is that it gets both Alabama and Georgia (No. 1 and No. 3 respectively in Steele’s preseason Top 40) on the road. They haven’t won in Tuscaloosa since 2010 and Athens since 2005.  Add in a home date with Texas A&M (No. 9) and it’s three Top Ten opponents in eight weeks.

Defending national champion Georgia does open the season vs. Oregon in Atlanta but draws Mississippi State as its rotating opponent from the wild SEC West, thereby avoiding Alabama, Texas A&M, Ole Miss, and LSU all together. The Bulldogs also get the benefit of drawing Tennessee, which may finally be positioned to vie for an East division crown, at home.

ULM fans hopeful for their first winning season in nine tries will have to wait until after Week 3 to start hoping. The Warhawks open at Texas, take a break to play FCS Nicholls State and then travel to Alabama. In cross-division play they do avoid Appalachian State and party-crasher Marshall but do draw Coastal Carolina which has only dropped two conference games over the last two seasons.

The defending Sun Belt Champion Cajuns do travel to Florida State for a Week 12 test but temper that challenge with FCS SE Louisiana, Eastern Michigan, and Rice in non-league play. From across the conference in the East they draw Marshall and Georgia Southern, avoiding App State and Coastal Carolina all together.

Two errors here. Colorado went 4-2 in 2020 so they haven’t had five straight losing seasons. Also, FIU does play at WKU in Week 4 but they do avoid Rice.

Kent St. will easily get $4M plus for those 3 P5 road games……Bill walton will love the Bruins sked.

I could be wrong, but my guess is that the American purposefully had Houston to avoid playing Cincy and UCF because they’ll likely play one of them in the Conference Championship Game.

Nah. Schedule was put together back when UConn left the conference, and Houston was bad.

“But meters that with Kansas”

The Pac-12 and the Mountain West have abandoned divisional play. Also, Louisiana’s non-Sun Belt schedule as a whole isn’t daunting. I wouldn’t be shocked to see Louisiana beat Florida State and unless Florida State is better than I think it’ll be, I’m not sure it would be a bona fide upset.

The Pac-12 still has divisions but will use winning % to determine two championship game teams. The Mountain West doesn’t drop their divisions until 2023.