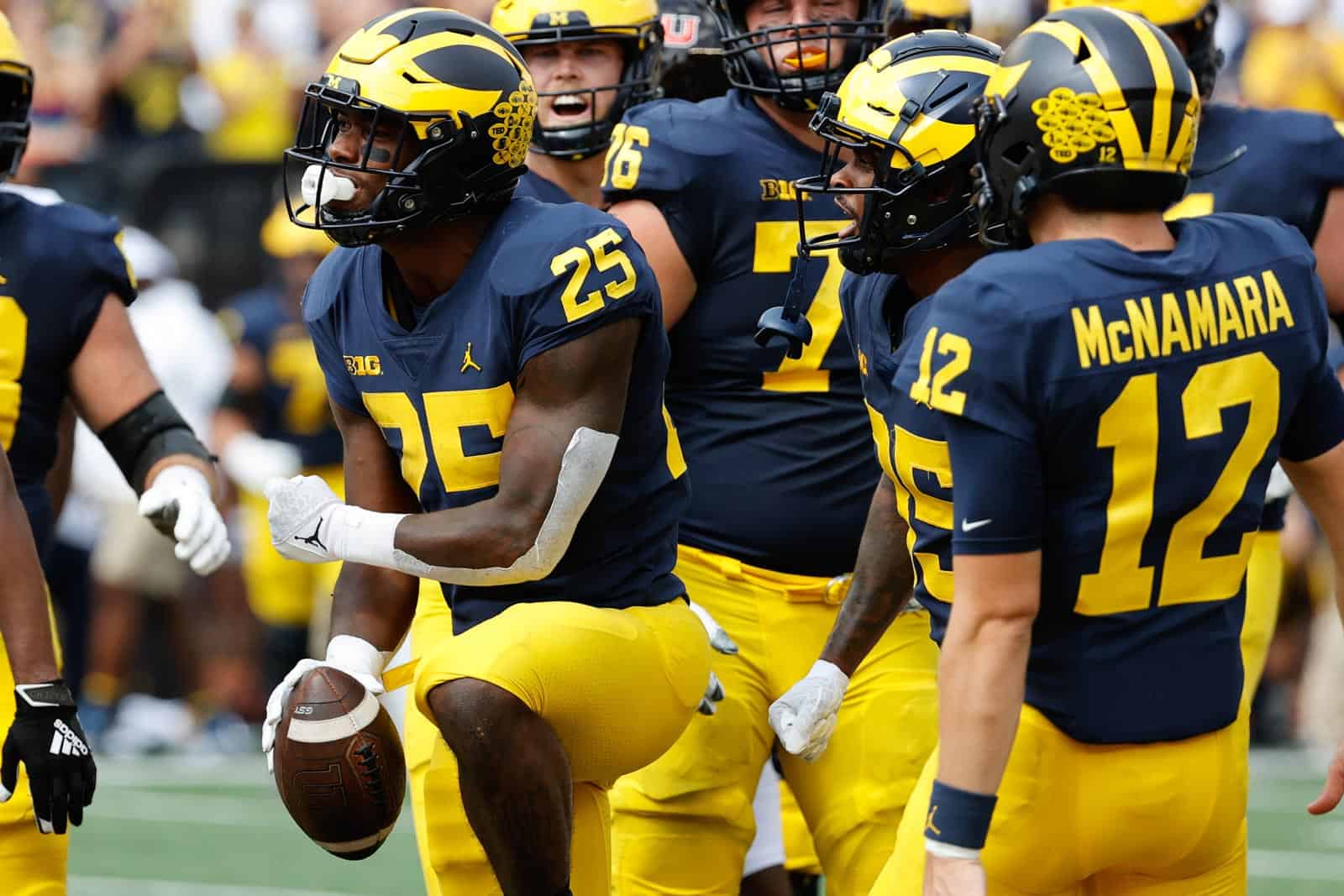 Of the 131 FBS teams set to participate in 2022, only seven – or five percent of the field – won’t play at least one Power 5 opponent in non-league action.

By conference, the dishonor roll includes three Big Ten members, two Pac-12 clubs, and two programs from Conference USA. That means that the ACC, Big 12, SEC, American, Mountain West, MAC, and Sun Belt all have 100% of its membership scheduled to square off with a Power program outside of conference play.

It’s a significant competitive advantage for all the teams highlighted, as they’ll each have a much easier path to at least one additional win.

It’s a swing that could make a difference in bowl eligibility, divisional and conference titles, and the College Football Playoff bracket.

As a note, for the pandemic-compromised 2020 season, teams are given credit for the non-conference Power 5 opponents that they originally scheduled as opposed to whom they actually played.

FIU failed to schedule a Power 5 foe outside of C-USA action as recently as 2020 when it was originally slated to face FCS Jacksonville State, UCF, Liberty and UMass before the pandemic compromised its plans. The Panthers have only scored two wins over current Power 5 members – a 24-17 victory over Louisville in 2011 and a 30-24 upset vs. Miami Fla. in 2019.

Compare FIU’s non-conference slate to that of fellow East division member Charlotte which doubles up on Power 5 foes with South Carolina and Maryland. While the 49ers balance the slate with Georgia State and FCS William & Mary, they are significantly more likely to pick up two additional losses than are the Panthers.

FIU has two Power 5 members currently booked in the future: Arkansas in 2023 and Indiana in 2024.

Although Cincinnati is as good, and in many cases better, than a wide swath of “other” Power 5 programs, the Bearcats aren’t technically a Power 5 foe. And so, Indiana makes the list. The Hoosiers are repeat offenders, also failing to play a Power club outside of Big Ten action last season, in 2020 and 2019. That makes Sept. 8, 2018 – a visit from Virginia – the last time Indiana faced a Power 5 opponent during the regular season outside of Big Ten play.

Compare the Hoosiers’ slate with that of fellow East member Penn State, who has a roadie at Auburn to go along with home dates vs. Ohio and Central Michigan.

This is the first season that Maryland has failed to schedule a Power 5 opponent outside of league play since 2016 when it opened with consecutive wins over FCS Howard, FIU, and UCF. Compare the Terps’ strength of schedule with that of Rutgers which has roadies at Boston College and Temple and a home date vs. FCS Wagner.

This is the first time in 78 years that Michigan hasn’t scheduled an opponent that is currently a Power 5 member (or Notre Dame) outside of Big Ten action. The year was 1944 and the Wolverines faced a trio of independents – Iowa Pre-Flight, Marquette and Pennsylvania (not State) – all resulting in wins that were a part of an 8-2 campaign and a No. 8 rank in the final AP poll.

In a fact that might surprise you, this is the first time since 1960 that North Texas hasn’t booked a current Power 5 member outside of conference play. In ’60 – which was 62-years ago, the Mean Green added dates with UTEP, Memphis, West Texas A&M (then State), Drake, Houston and Hardin-Simmons to go along with its mini-Missouri Valley Conference schedule.

Compare UNT’s 2022 non-league slate with that of fellow C-USA West member Louisiana Tech which has a double whammy of roadies at Clemson and at Mizzou along with a visit to South Alabama and a home date vs. FCS Stephen F. Austin.

This is the first time since 2014 that Oregon State has failed to schedule a Power 5 opponent outside of Pac-12 play. That team went 5-7 in Mike Riley’s final season in Corvallis with three of the five wins coming vs. FCS Portland State, Hawaii, and San Diego State.

Compare the Beavers’ non-Pac 12 slate with that of Oregon, which opens in Atlanta vs. Georgia and then welcomes FCS Eastern Washington and BYU.

UCLA opted-out of scheduling a Power 5 foe in non-league play as recently as 2020, when it had New Mexico State, Hawaii, and San Diego State on the books before the pandemic hit. Prior to that, it was all the way back in 1992 when the Bruins didn’t play a current Power 5 member instead facing Cal State Fullerton, BYU, and San Diego State.

Indiana playing at Cincinnati is an extremely tough game. The unofficial “power 5” category needs to go away. Good teams are good teams. It’s weird to call out a team because they schedule Cincinnati instead of Wake Forrest.

100% with you, Chad. I’ll bet more than half of the “non-power schools” could be Kansas and Rutgers on their home fields.

It isn’t just Cincinnati that is “better than a wide swath of other [Autonomy conference] teams”. The top 4 of the AAC, MWC and Sunbelt are all better than the bottom half of the Autonomy teams.

From these facts, your assertion seems just a little… unsupported.

He said the top 4 could beat the bottom half of the power 5. Your response doesn’t remotely address this, and therefore your response seems a little… irrelevant.

He is saying the top 4 of G5 is better than the bottom feeders of P5 conferences. Bottom tier P5 teams aren’t going to bowl games.

Comparing the results of playing 10 of 12 games against Group of 5 opponents to that of playing 10 of 12 games against Power-5 opponents is completely inappropriate. Because of the small number of games played directly between the schools chosen for comparison, the framework I chose to discuss the collective behavior of the two groups is completely appropriate and more accurate.

Mike – Since the start of the playoffs, Cincinnati, Memphis, Houston, UCF and Boise State have a combined losing record of 35 and 38 (47.9%) against Power-5 opponents. Only Houston, at 9-5, has a winning performance. At the same time Duke, Kansas, Rutgers, Syracuse and Vanderbilt have a combined winning record of 42 and 19 (68.8%) against Group of 5 opponents. Only Kansas, at 2-7, has a losing record. In addition, the Group of 5 school being discussed are 281 and 119 (70.3%) against other Group of 5 programs. This represents only slight increase (~1.5%) over level of the Power-5 programs outcomes being discussed. In other words, the G5 elite programs perform collectively a smidgen better than the dregs of the P5.

Appalachian State is undefeated against P5 teams finishing 6-6 or worse in 8 years of FBS football in the Sun Belt, which supports this point.

That App State’s record versus such teams is 2-0 in 8 seasons says a lot about the types of P5 squads that good G5 teams are able to schedule.

If UCLA doesn’t win their OOC games by a combined 100 points, that’s bad.

It should also be mentioned that Cincinnati will join the Big 12 soon.

I suggest we give Cincinnati and Boise ST honorary Power 5 status and take it away from Kansas and Vanderbilt. Great article and hopefully this will be an issue for any team that gets into sniffing zone of the playoff.

Michigan and UCLA should be ashamed!

Putting Indiana and Oregon St on this list is flat-out embarrassing, as is listing G5 squads with quality opposition (North Texas). Maryland is playing at least two teams that went to bowls.

The article was on the power 5 teams that have exclusively non-power 5 non conference games. It had nothing to do with the difficulty of schedules or the quality of certain group of 5 opposition. How can it be “flat out embarrassing” to list Oregon State and Indiana when it is factually accurate in saying that they do not face any power 5 teams in the non conference? You seem to be conflating things.

It’s not a strength of schedule article, but merely an article that points out who isn’t playing a P5 non-conference game. That’s it.

Ok we did this back in 2020 on the fly. Why don’t Michigan and UCLA play each other this year in Pasadena next year in Ann Arbor. Both schools will be on this list next year as well. I would think Harbaugh would love to get some So Cal exposure. Game would also be good TV either Saturday night football, ESPN primetime or a night game on FOX.

They were scheduled to play each other 22-23, it was canceled this year. That’s why they both landed on the list.

To me, if you schedule an FCS team, you should scheduled a “good” P5 team. For UCLA to schedule Alabama State and then two G5 schools is bad. If you want to go Buffalo, UL-Monroe and Utah State, that’s ok, but two G5s and an FCS.

They’re obviously cognizant of this too since they are scheduling it. Maybe they feel their PAC-12 slate is too strong to afford to take an additional p5 matchup. If that is the case, that is also reason for concern.

Lighten up people! We all know that not all P5 teams are better than every Go5 teams- though I disagree with the assertion that the top four in every Go5 conference could compete on a P5 conference. Certainly Cincinnati, UCF, Boise, San Diego State, and Houston have been stronger for the last few years than Arizona, Rutgers, Vandy, Kansas, etc. If you want to find schedule strength analysis that is more sophisticated, you know where to find it. I go to this site for scheduling news and enjoy Amy’s weekly articles during the season. I’m not expecting deep statistical analysis here- enjoy it for what it is or scroll past it.

Don’t tell me what to do! It’s my party and I can cry if I want to.