The most meaningful single word in sports 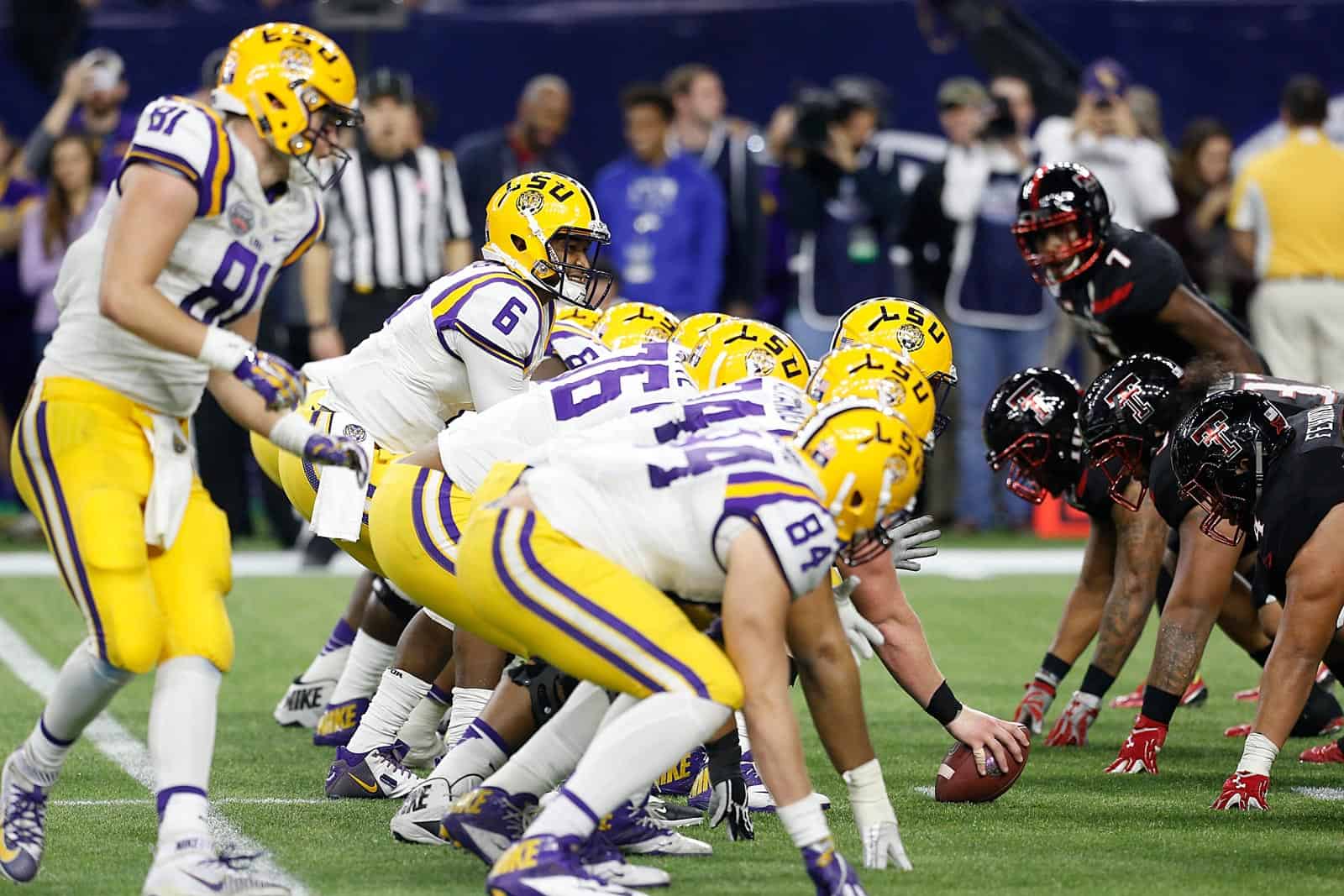 If I were going to be completely honest, I’d admit that I’m apt to show more emotion while watching college sports than I am when interacting with actual people.

Where the sports side of my personality has broken down in tears after a last-minute field goal, thrown a baby gate after a blown lead and refused to go pick out a Christmas tree two days after a loss in a league title game – the regular-life me is, for the most part, calm, cool, and collected.

Most of my people have only seen me cry a couple of times, outside of the sport of marriage I don’t explode emotionally, and I pretty much go along with everyone else’s plans without complaint.

It’s why I’ve been accused – by others and myself – of caring too much about sports.

It’s also why the use of a certain word by a fellow sporting enthusiast can bring on a swell of emotion that is usually, at least for me, reserved for the people who I gave birth to.

It’s a word that seems harmless. That is, unless a fan of another team uses it to refer to, with clear intention, my team.

The first person who comes to mind when I think of this is my beloved Dad, also my first true sports friend. I can clearly remember sitting down on the couch next to him, as a very small child, and asking “which color helmets are we rooting for today?” My father guiding me through those first football games marked the beginning of a passionate love affair.

Dad went to Ohio University. That means I spent much of my childhood – in Houston, Texas – being extolled with the greatness of the Mid-American Conference. I knew about the MAC long before anyone else I knew did.

That meant, even though I grew up in the pre-ESPN age with no Wednesday night MACtion, that the Bobcats were my team. I rooted for Ohio U – and the Houston Cougars – via the newspaper. As a girl whose first love was the NFL and the Houston Astros, that low-level commitment worked well for me.

Then I blossomed into a woman, and at 18 took my first walk across the Texas Tech campus to a football game. I could hear the Goin’ Band from Raiderland most of the way, and when the back of the giant double-T scoreboard came into sight, something in me changed.

Five seasons later, with a business degree in hand, I was a certified college football fanatic.

My football heart had found its destination. It was a love that became an obsession.

It also meant that Dad became a Red Raider fan. He was a die-hard. We dropped the Cougars from our docket, mostly because I went to Tech during the Southwest Conference days where we played U of H each season. Dad and I didn’t operate with any conflicts of interest.  “Our” teams were locked-in: the Bobcats, the Red Raiders, and the Astros.

I don’t remember the first time Dad uttered the “magical word” in reference to Texas Tech – but I can vividly recall him telling me during the Mike Leach era, “We gotta play better defense, Amy…If we did that,” he continued passionately, “We could win it all.”

I was at my parents’ house when he said it. It was an obvious reference to the Red Raiders’ epic struggle to bring their defense up to the proficiency of the offense. It’s a clear memory because my mom – who was in the next room – protested loudly, “Dick! You can’t say ‘We’ – you didn’t even go to Texas Tech.”

But he did say it and he continued to say it. I can’t remember him ever not saying it.

Originally, I surmised that he had the right to use “we” because he fully funded my Texas Tech experience. But as I matured, in life and sports, I realized that his use of the word was because he loved the Red Raiders as much as I did because he loved me beyond measure.

As a fellow sports zealot, he saw that deep passion in me, identified with it in a way beyond all the words, and then loved the crap out of Texas Tech athletics for me.

It’s a profound, and perhaps completely underrated, wrinkle of love.

Dad passed away in 2019. Ironically, he left us during Tech’s epic run to the NCAA Men’s National Championship. His death was sudden, but in one of our final conversations he told me, “Amy, this team is special, we’re going to make a run.”

His memorial service was the day of the Final Four game vs. Michigan State. I didn’t watch it because I just couldn’t. “We” had left the building.

The night of the national championship game, I didn’t know what to do. Texas Tech – Texas freaking Tech – was playing for a NATIONAL CHAMPIONSHIP. I didn’t know how I was supposed to watch it, or not watch it.

My brother and sister, who do not love sports like I do, put Dad’s Tech gear on, came and picked me up, and watched the game with me at a local wing establishment.

It was a sweet memory even though we lost to a good Virginia team on an uncontested three-point shot at the end. And despite that I almost got in a fight in the parking lot with a drunk kid who got in my face and told me that Tech sucked.

Dad dying and the Red Raiders losing the natty within mere days of each other was a potent enough combo for me, a 51-year-old woman, to want to jump into the octagon with a 20-something year-old stranger.

While other friends and family members used “we” in reference to “my” teams before Dad’s passing, it’s seemed to mean even more, exponentially so, the few times it’s happened since he died.

This past basketball season, when Tech was playing Duke in the Sweet 16, my BFF Dana’s husband, Jim, who is also my close friend, texted me after the game.

“Dang. I thought we had it. They just hit their free throws.”

Jim is a certified LSU fan, through in through. He’s not one of those guys who has “other” teams, especially on the college level. He, like I, is a monogamous fan.

Him using “we” in reference to a Tech team almost, and I mean almost, took away the pain of losing in what was supposed to be Coach K’s final game with the Blue Devils.

I can’t imagine my friend Jim doing anything else that could have had more meaning. Not because I love sports too much and not because I care on a level that’s ridiculous.

Instead, it’s because he cares that much. And he gets who I am. He said, “we”.

Guys, I’m going to stand up and admit it to the crowd…I think “we” can win it all with our new coach. Brian Kelly. At LSU.

This was different what what I expected but I enjoyed it thoroughly. Great story!

This so elegantly captures the essence of what separates college sports from pro sports- the real investment of time and life that gives you the right to say “we” in a way that so often rings hollow in the arena of professional multimillionaires. There is little better compliment than someone identifying themselves as part of your tribe: I thought we had it.

Great article! I live in Ohio and attended Ohio State. I grew up 10 minutes from the Horseshoe and I can definitely relate to your passion for Texas Tech.

A side note – my son who is currently a HS junior is being recruited by the Ohio U Bobcats.

Dittos to what Lumen Veritatis, Spencer Coldburn & Muffin said about your writing.

Lumen Veritatis describes how I feel & think. I went to College but stopped out because I wasn’t prepared & competitive enough to achieve the real Reasons for a Degree.

I’ve never had to give up my college sports tribal Loyalty though & I’ve felt & feel part of my familie & extended famlie Members who have succeeded & are succeeding there.

Amy, your boy Brian Kelly is the ultimate “me” operator (opposite of “we”). For big-game Brian, success occurs in the first person and failure occurs in the third person.

It’s doubtful that BK will deliver you much beyond “buyer’s remorse”.

Good luck with him!

Amy, this article was a joy to read. It has several elements similar to my own family and helps to explain some of my own family dynamics : my father becoming an avid fan of my alma mater as a reflection of his love.

Thanks for writing and sharing, Amy. Always look forward to your analytical articles.

Best sports article I have ever read in my life.