The 12 college football rivalry trophies with the best backstories 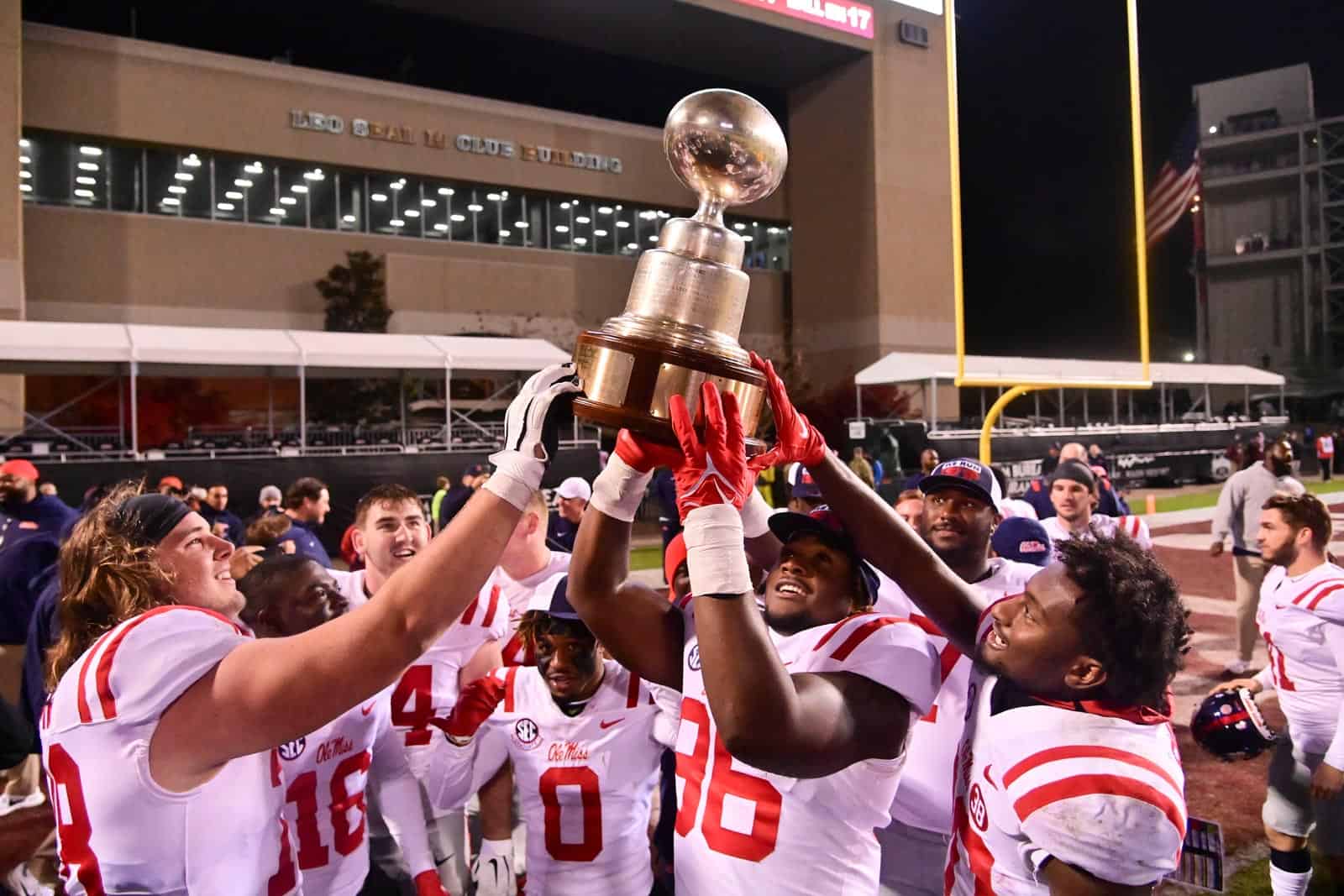 While college football’s current trajectory is guided by cash flow, the traditions, legends, and lore that underpin the greatest team sport are alive and well.

There’s no better illustration of this than the 100s of traveling trophies that are associated with rivalries. These prizes, each unique, each with its own story, transcend all the dollars and cents. While all are worthy of celebrating, what follows are a dozen of the greatest narratives in the FBS.

Awarded to the winner of the “Border War” since 1968, the Bronze Boot is, as advertised, a bronzed jump boot formerly worn by Colorado State alum and Vietnam veteran Jeff Romero, Sr. In one of the coolest traditions associated with a rivalry game, the two schools’ ROTC detachments meet at the Wyoming/Colorado border each year after the contest with the game ball. The school scheduled to host the next meeting runs the ball back to its stadium. The Cowboys have captured the Boot 29 times vs. the Rams’ 25.

THE FLOYD OF ROSEDALE – Iowa vs. Minnesota – series started in 1891, Minnesota leads 62-51-2 but Iowa has won seven-straight.

The Floyd of Rosedale is a bronze statue of a pig honoring an actual pig. The original animal was the price of a bet on the 1935 game wagered between Minnesota Governor Floyd Olson and Iowa Governor Clyde Herring. The pig, a prize hog, hailed from Rosedale, Iowa. The Golden Gophers won the real pig in a 13-6 decision, ultimately finishing the season 8-0 and capturing the second of three consecutive national titles. Since then, the Hawkeyes have brought home the bronze edition of Floyd 43 times vs. the Gophers’ 41.

The last time Georgia Tech and Vanderbilt met, in 2016, neither team had a clue that the matchup – considered a rivalry while the teams shared membership in the Southern (1922-33) and SEC (1933-63) – had its own traveling trophy. That is until a Georgia Tech administrator went looking for printer toner and found the once coveted prize in an old filing cabinet. The Cowbell was purchased 92 years earlier by Yellow Jacket fan Ed F. Cavaleri on the way to the 1924 game to be used as a noise maker. Georgia Tech got blanked 3-0 that day compelling Cavaleri to present his cowbell, The Cowbell, to the Commodores. It marked the first of 27 times that he would faithfully award his purchase to the victor. Georgia Tech left the SEC to declare its independence in 1964 (it didn’t join the ACC until 1983) and the rivalry fizzled out. Cavaleri presented the Cowbell for the last time in 1967. The two have only met four times since and currently have no future dates booked.

Awarded to the winner of the Egg Bowl, the Golden Egg debuted in 1927, the season after underdog Ole Miss (which had only beaten its in-state rival five times in 23 tries) scored an unexpected 7-6 win in Starkville over then Mississippi A&M. Zealous Rebel fans stormed the field after the game, rushing towards the goal posts only to be beat back with cane chairs by State fans. According to the MSU school yearbook “a few chairs had to be sacrificed over the heads of these to persuade them that was entirely the wrong attitude.”

The incident was so ugly that the student bodies decided to present a trophy after the next game “in a dignified ceremony designed to calm fans…The trophy, to be called ‘The Golden Egg’, would be a regulation-size gold-plated football mounted on a pedestal. Costs of approximately $250 would be shared by both schools.” Ole Miss has collected 58 Eggs vs. Mississippi State’s 31.

What sets the Golden Screwdriver apart from all the other FBS rivalry trophies is that it’s not an official part of the game its associated with. At least not yet. It all began in 2002 when Hawaii visited Fresno State and scored a 31-21 victory. At the end of the game fans got rowdy resulting in then Warrior head coach June Jones claiming to have been hit in the head by a screwdriver hurled from the FSU stands. The trophy, a golden screwdriver implanted in artificial turf on a rustic wooden base “commemorates” the altercation. Its creation is the result of a Fresno radio station’s call for listeners to design an annual award for the rivalry game.

The result of a collaboration between honor societies at the two schools, the tradition of the Illibuck dates to 1925. The first two winners – Illinois in 1925 and then Ohio State in 1926 – received a live turtle, the animal chosen because it’s longevity which mirrored the rivalry between the two schools. Ironically, the real turtle died in 1927 and from that season on the winner has been awarded a 32-pound wooden turtle – affectionately known as Illy Illibuck. The Buckeyes have captured the replica tortoise 64 times vs. the Illini’s 22. The two haven’t met since 2017 and don’t have plans to clash again until 2024.

The Battle for the Iron Skillet began in 1946 to prevent vandalism after more than $1,000 in damage had been done to both the TCU and SMU campuses after the 1945 game – a 34-0 shutout win for the Mustangs. But why a skillet? It all goes back to the urban legend of an SMU fan frying frog legs in, you guessed it – an iron skillet – at a tailgate before the annual game. Eventually the tradition faded but was revived in 1993 with the introduction of a new Iron Skillet. The Horned Frogs have won 20 of the new frying pans vs. the Mustang’s seven. The two schools have only missed playing each other four times (in 1986, 1987, 2016 and 2020) in the last 100 years (or since 1921) and are scheduled to meet thru 2024.

THE LITTLE BROWN JUG – Michigan vs. Minnesota – series started in 1892, Michigan leads 76-25-3 and has won three-straight and nine of the last ten.

The self-proclaimed “oldest trophy game in FBS college football” the Little Brown Jug debuted in 1909. Legend has it that the jug itself dates to 1903 when Minnesota – boasting a perfect 10-0 record – hosted a Michigan squad on a 29-game winning streak. Fielding Yost, the Wolverines’ head coach, doubted that the Golden Gophers would provide sanitary water for the visitors and had the team’s manager visit a Minneapolis store to purchase a five-gallon water jug. The game ended in a 6-6 tie with Minnesota scoring a touchdown on the final play. Pandemonium ensued and Michigan left the jug behind. The Gophers scooped it up, painted the score on it and hung it from the coaches’ office ceiling.

The two teams didn’t meet again until 1909, when the Wolverines made the trek back to Minneapolis, this time scoring a 15-6 win. Not only did the victory earn them the right to finally return home with their Jug – it kicked off a 108-year-old tradition. Michigan has won the vessel of victory 72 times vs. Minnesota’s 23.

THE STANFORD AXE – Cal vs. Stanford – series started in 1892, Stanford leads 60-45-10 but the two have split the last four, the visiting team winning on each occasion.

Awarded to the winner of the Big Game, the Axe  dates to 1899 when the two schools met for a trio of baseball contests. That’s when the Axe was purchased, “probably from Sears” by Stanford fans and painted red. Cardinal enthusiasts used the Axe to chop up a variety of Cal related items, including beheading a scarecrow wearing school colors. After Stanford blew a late lead in the final game of the series, Cal fans stole the Axe.

After spiriting it back to Berkeley, Golden Bear enthusiasts held on to the prize for 30 years. That’s when, in 1930, a group of Stanford students referred to as the “Immortal 21” by their school and the “Immoral 21” by Cal, stole the Axe back. In 1933 the schools decided to award the Axe to the winner of the Big Game. To date, Stanford has won the implement 48 times vs. 35 for Cal.

One of nine bells associated with FBS rivalries, USC and UCLA’s Victory Bell dates to 1939 when the UCLA Alumni Association gave the bell, a massive 295-pounder off a locomotive, to its alma mater. The Bruins rang the bell after each football point for two seasons until 1941, when members of a USC fraternity disguised as UCLA fans, stole the bell during the season opener. After a series of shenanigans, the two schools signed an agreement before the 1942 game to award the bell to the winner of the cross-town rivalry. The recipient earns the privilege of painting the bell’s carriage its school colors, an honor the Trojan’s have earned 46 times vs. the Bruins’ 33.

Kent State and Akron’s Wagon Wheel dates to 1946 when KSU Dean Raymond Manchester claimed he had possession of a buggy wheel that had belonged to the founder of the institution that eventually became the University of Akron. Though Manchester valued the Wheel, he stated he was “willing to put it up as a trophy,” because, if his school and its rival were to meet on the gridiron, “there’s no danger of losing it.” Though bold, he was correct, at least in the short term – Kent State won the first 10 Wheels, but since then the Zips have earned a 25-16 advantage. The two schools are located only 12 miles apart, south of Cleveland, Ohio.

THE $5 BITS OF BROKEN CHAIR TROPHY – Minnesota vs. Nebraska – series started in 1900, Minnesota leads 35-25-2 and has won three-straight.

If looking for the least awe-inspiring trophy, see the monstrosity that my Nittany Lions and the Michigan St Spartans play for annually. The best description I ever heard of it is that someone took a block of wood, covered it with glue. dropped it into a large garbage bag filled with random trophy parts, and the Land Grant Trophy was born. Feel free to mock it unmercifully, as both fan bases do.