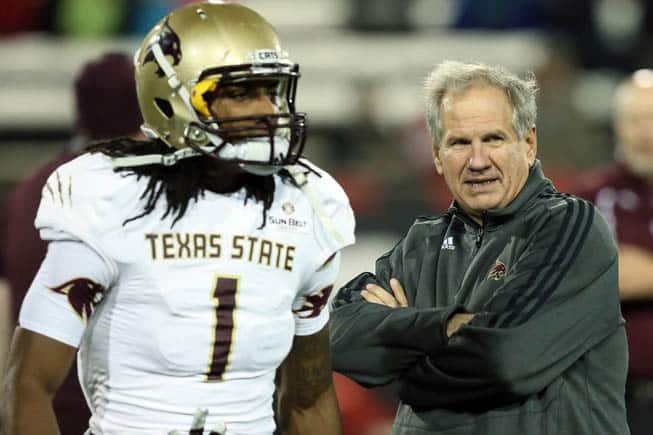 The Texas State Bobcats and the UTSA Roadrunners have scheduled an eight-game football series, both schools announced today.

“We are excited that we will be playing a long-term series with Texas State,” UTSA head coach Larry Coker said. “Although we have played just one time in our first three years, we think this could build into a rivalry like it has in our other sports. I’m sure our fans are looking forward to the eight games just as much as we are.”

Texas State and UTSA have previously met only one time on the gridiron. Back in 2012, the Roadrunners defeated the Bobcats 38-31 in San Antonio.

“I am excited that the I-35 rivalry we started many years ago in all of our sports will have eight years on the football field,” said Texas State athletic director Larry Teis. “Our first game at UTSA drew nearly 40,000 fans in 2012 and both schools realize the importance and benefits of playing one another. We want to thank Lynn Hickey and her staff for working with us to begin a long-term series with UTSA.”

“With the proximity and similarities that we have, this could develop into a special college football rivalry,” added Texas State head coach Dennis Franchione. “It will be a great game for the fans of both schools to watch.”

UTSA also announced today that two future football games in 2017 and 2018 against Colorado State have been cancelled. Those games were replaced by contests vs. Texas State.

UTSA what a joke. Will always remain 3rd week. Will never forget my sr yr of highschool and seeing their acceptance rate at 97%

When is UTSA going to schedule S. Dakota? That match-up HAS to happen! I’m sure the Cartoon Network will show it.