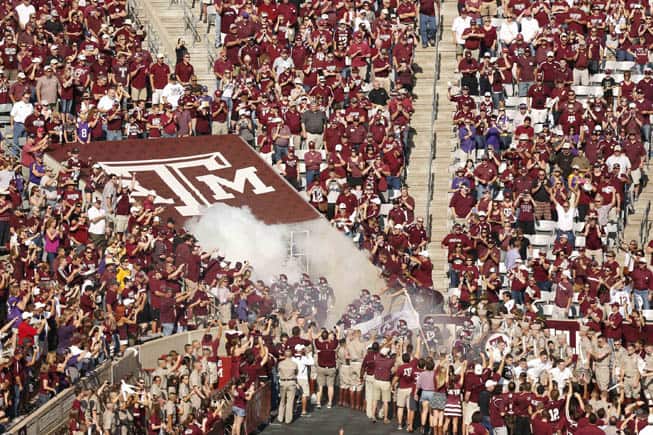 The Texas A&M Aggies and the UCLA Bruins have scheduled a home-and-home football series for 2016 and 2017, both schools announced today.

“We are very pleased this series was able to come together and provides our program with an exciting, premier non-conference matchup against UCLA,” Texas A&M Director of Athletics Eric Hyman stated.  “UCLA brings one of the top programs from the West Coast to the redeveloped Kyle Field in Aggieland, and for our Aggie team and the 12th Man to have the chance to play in the Rose Bowl is a historic opportunity.”

Texas A&M and UCLA have met four times on the football field with the series tied at two games each. In their last meeting in the 1998 Southwestern Bell Cotton Bowl, the Bruins defeated the Aggies 29-23.

“Facing tough non-conference competition is a necessity with the new playoff system beginning this year,” said UCLA Athletic Director Dan Guerrero. “We are excited to add home-and-home series with both Texas A&M and San Diego State to a future schedule that already includes a traditional Big Ten/Pac-12 series with Rutgers.”

Texas A&M now has three games scheduled for the 2016 season and two in 2017. After opening vs. UCLA in 2016, the Aggies host Louisiana Tech the following week and later host UTSA on Nov. 12.

UCLA has now completed both their 2016 and 2017 non-conference schedules. The Bruins also host UNLV and travel to Nevada in 2016, while in 2017 they host Hawaii and visit Memphis.

If Sumlin and Mora are still at each respective school, this will be a great series.

Even last season with Manziel they lost 4 games. How far will they fall without him? My guess is something like their perfromance from the last decade when they went 62-59.

What Christopher said if funny now. He’s probably one who said A&M can’t hang in the SEC.