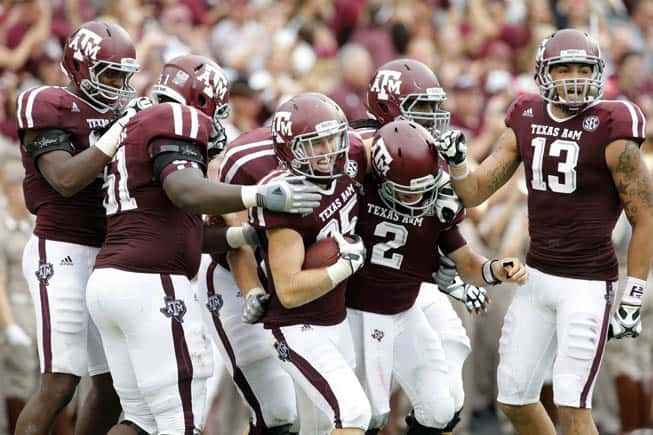 A couple of weeks ago, we confirmed that Texas A&M and USC never finalized their 2015-16 home-and-home football series.

A spokesman for the USC athletic department told us that there were “very preliminary discussions between the schools, but nothing ever came of it.” Later, Texas A&M told us that former Director of Athletics Bill Byrne started the discussions with USC but they had heard “nothing more about this series.”

Although Texas A&M officially announced the series with USC, Byrne had apparently “jumped the gun” according to the Trojans.

Included with that official announcement was a 2018-19 home-and-home series between Texas A&M and Oregon. Two weeks ago, an Oregon official confirmed that there was a signed contract and that the games were scheduled for Sept. 15, 2018 in Eugene and Sept. 14, 2019 in College Station.

However, current A&M athletic director Eric Hyman told the Houston Chronicle yesterday that those games are no longer part of their plans because “having switched from the Big 12 to the SEC, we’ve had to scrub our whole schedule – throw it almost out. Going forward, we’ve had conversations with people, but we really can’t be contractually (obligated) until the conference says you’ve got the green light.”

So it appears that Texas A&M has or will back out of that future series with Oregon. That move essentially “scrubs” the Aggies future schedules after 2014.

Hyman went on to say that the Aggies want “balance” in their future schedules with likely an FCS team and a “lower-level BCS game, and then you have a game from a national standpoint.”

Currently, Texas A&M has three games scheduled in 2014: vs. Lamar, at SMU, and vs. ULM. That schedule is ripe for the addition of a “national” game against a BCS program.

There are no games currently scheduled for the 2015 season. Louisiana Tech, originally schedule to visit in 2012, will play at Kyle Field in 2016. The only other future game scheduled is New Mexico in 2017.

That may be true, but there is also a lot of uncertainty in future scheduling due to the upcoming College Football Playoff. In addition, SEC commissioner Mike Slive said at the Spring meetings this week that he wants to set dates for conference games first and then have schools schedule non-conference games around that.

With so many changes in college football lately, future schedules will continue to be in flux.

Alan Cannon, Texas A&M Associate Athletic Director for Media Relations, told us in an email that the Oregon series is still on.

Due to the transition of the new athletic staff, A&M athletics director Eric Hyman “was unaware of the signed contract and he is sorry for any confusion.”

Dave Williford, Executive Assistant Athletic Director, Football Communications at Oregon also told us that TAMU’s AD “misspoke” and lumped the USC and Oregon games together. “They assured us UO-A&M games are still on from their point – we have always considered them on.”

With all of that being said, 2018-19 is still a long ways away. If the SEC moves to a nine-game schedule, or due to other factors, the series could still be mutually canceled.

It’s been over a year since news of the possible cancellation broke. Today, the series was officially canceled.

How do you spell cowardice? I’ll start believing that the SEC is the number one conference when they stop playing the directional schools.

The article mentions the series are in jeopardy because of conference scheduling, not a unwillingness to play these schools. Having one marquee ooc game on your schedule is wanted moving forward.

Yes, they say it’s in question because of conference scheduling.

They’re right. The SEC wants conference schedules to match the ease of SEC OOC schedules. That means attempting to back out of games against good teams and scheduling more patsies to artificially inflate your record.

I wish I was just trolling. But that’s the god-awful truth. The SEC is a joke.

Florida, Georgia, and South Carolina all play non-conference rivals that matter. Alabama and LSU routinely open the season at a neutral site and win. What else do you want?

Need a playoff more than ever. SEC and other 14 team conferences can schedule 4 weak non conference teams and now they miss playing the toughest teams in their own conference some seasons. Just not enough games outside of conferences to crown a true champ unless you have an 8 team playoff!!

“Other 14 team conferences”? The SEC is the only 14 team conference! The fact that TAMU is using the “move to the SEC” as a bail-out is a direct reflection of the SEC’s unwillingness to step up and play a true home-and-away against another top-tier BCS team.

Other than two or three teams in the Big 10, Big 12, Pac 12, ACC, nearly all of them have weak non conference schedule. Nobody plays multiple ranked teams in non-conf. and only a few play even one ranked opponent. Telephones go both ways; rarely will other conference team agree to play a home and home with the SEC.

Not true dukforlife. The ACC has 14 teams this season and the Big 10 will have 14 next season

Coming from a fan of a Pac-12 school, an 8-team playoff is going to be much worse for non-SEC fans. Remember when LSU and Bama squared off for the NC? Expect more of that if you do go to an 8-team playoff. Bama would be in the NC game for sure. Then you’d have LSU, Texas A&M, South Carolina, and Georgia and any one of them could very well end up facing Bama in the title game even if they have to go through each other to get there.

and of course I would be talking about just this past season.

Bill, I agree with you. The playoff should include 8 teams. SEC with weak non-conference scheds most years.

Has anybody on here looked at how weak the non-conference schedules are of Pac-12, Big-10, Big-12, ACC, etc. I’m not exactly seeing a bunch of ranked teams there either. Texas A&M is being scared not to play those Oregon, USC games though.

Check the update at bottom of article. Texas A&M is still playing Oregon, for now at least.

Yes, everybody does look at other’s non-conference schedules. You can’t say a word about the Pac. They’ve have the toughest OOC schedules every single year for at LEAST a decade.

The reason we laugh at SEC schedules is because they play the weakest OOC on their own…but only having 8 in-conference games make SEC schedules the unquestioned weakest in the country. It’s actually downright pathetic. And it’s compounded by SEC fans attempting to anoint themselves the best every year without proving a damn thing.

Yeah, I’ll believe the Aggies are actually going to play at Oregon only when I see their players run onto the field in Eugene. If aTm thinks they are going to be good that year, they’ll cancel for sure. Only way they go to Eugene is if they’re going through a terrible stretch and have no shot at a high ranking that year.

PAC-12 should expand to 14, adding Utah State, and Colorado State.

that is a silly comment. BYU and Boise would be the logical additions. Utah State plays in a stadium the size of a good basketball arena and does not even fill it. Colorado St. doesn’t even play real football any more.

no! Texas and Oklahoma or no one.

It would actually make scheduling CFB games a TON easier, plus they would make more money.

Not sure what you want from the SEC…

Wow, all i see is alot of he said she said. we’ll see when the BCS championship is played. Its a long season, injuries weather, all I can say is watchout fot the Ducks. Quack Quack quack. 41 pts in 1 1/2 qrtrs in the rain. Dang.

Ha Ha. TAM backs out after all. Funny jokers in College Station.