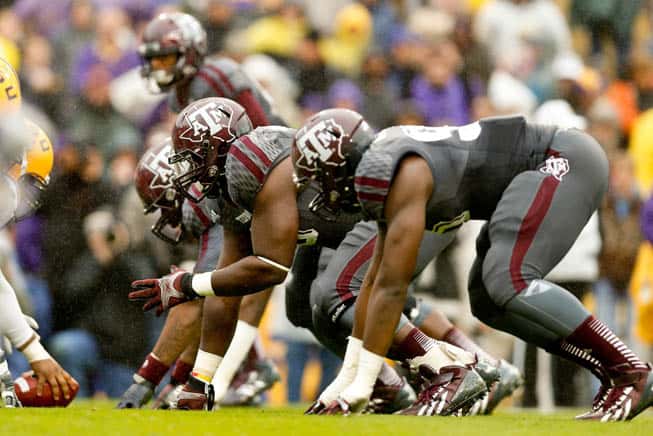 Texas A&M and Texas Tech have a long history of playing each other on the football field. The two schools first met in 1927 and played 18 times through 1959.

In 1960, Texas Tech joined Texas A&M in the Southwest Conference. That started a yearly battle that continued into the Big 12 Conference. But when Texas A&M left the Big 12 for the SEC in 2011, the A&M-Tech rivalry ended.

Unlike Texas A&M’s lost rivalry with Texas, it appears they may get Texas Tech back on their future schedules before too long, according to Kirk Bohls of the Austin American-Statesman.

Though it would be nice to see Texas A&M and Texas Tech meet sooner rather than later, Texas Tech athletics director Kirby Hocutt stated that it will be “2020 or beyond.”

Unless there’s a compelling reason like an SEC team being left out of the College Football Playoff, Texas A&M and other SEC teams will likely continue to schedule just one Power Five team per season.

Texas Tech, which doesn’t have a non-conference scheduling mandate but does only have three slots, is travels to Arkansas in 2015 and plays a home-and-home series with Arizona State in 2016 and 2017.

I hope they can make this rivalry come back soon, I think it would be one of the better games to watch every season.

I don’t see what A&M would have to gain by playing in Lubbock, it’ll probably be neutral site games in Dallas and Houston.

Both A&M and TT already play annual neutral-site games in Texas. (TT plays Baylor and A&M plays Arkansas.) I guess anything is possible, but I think they’d both rather have an extra home game against a major opponent.

Now that A&M is in the SEC they are too good to visit Lubbock? Come on. These two teams have tons of history from the days of the SWC and Big 12. Unless it’s a one off game (then a neutral site makes sense), the series should be played on both campuses.

Then swap Dallas with San Antonio and you’ve got a SA/Houston series. Having gone to a school in Texas that is neither of these schools (and not being a Texas native), I’ve seen how the general public reacts to Tech – they don’t. It’s not like a ton of recruits are coming out of the area, so if anything it seems like political posturing so they can say they’re playing one of Big XII schools.

@Shep.. Permian is a huge talent factory out there in West Texas. I would love a home and home with Tech. I think a neutral game is dumb, especially between two teams with such history. Has to be a home and home.

I would prefer if every school in Texas would refuse to play Texas A&M. They can enjoy the SEC and all their new rivals.

You are def a bandwagon fan then. I don’t think students and alumni still care three years later that A&M left for the SEC. If you went to school in Texas, you enjoyed the battles between all the Texas schools. Stating that you’d rather never play A&M again since they left the Big 12 just makes you butthurt still like UT. Hopefully UT will loosen their stance on playing A&M again, as it just seems that A&M got good and Texas refuses to play them as they would suffer a PR nightmare if A&M beat them after leaving the Big 12. This is the landscape that UT created as nobody ever seems to mention Colorado, Missouri, and Nebraska all leaving as a result of Texas as well.

I would love to play Tech again…. provided they don’t throw feces at our bus or attack our fans with a goal post….

If you want to believe that really happened you can. The truth is someone (don’t know who: some say a Tech fan, some say an aggie) put stink bait (for fish food) on the bus. The goal post came down because Tech beat a top 5 arrogant football team at home and ruined their chances of a national title.

As a Tech fan I’m not going to bash you, because I do have class. Thought you should see the other side of things. You have your close minded opinion and I have my open-minded vision. That being said, I would love to see this happen.

Or throw tortillas and hit me in the eye again.

Those are Mexican frisbees.

Wow! Just ran across these posts! Kinda funny tamu people complaining about TT. I was neutral on tamu till I went to a game there and was treated with the worst sportsmanship EVER! I had my hat ripped off my head & thrown & mobs of aggs cursing at me and my girlfriend. I’ll support my kids to go to school anywhere except tamu. If they go there, they’ll have to find a different place to come home for Christmas, b/ c they’re not allowed in my house ever again!

An old rivalry that will spark interest from both fan bases. Both teams will get credit for scheduling a Power 5 conference opponent. Besides the bowl game with Oklahoma who had to play A&M, who from the Big 12 is willing to play A&M? I actually thought Oklahoma and Oklahoma State were not against playing A&M in the future. However, if Texas Tech wants to step up, I’m all for it. I think A&M still needs to fill a spot for 2016.