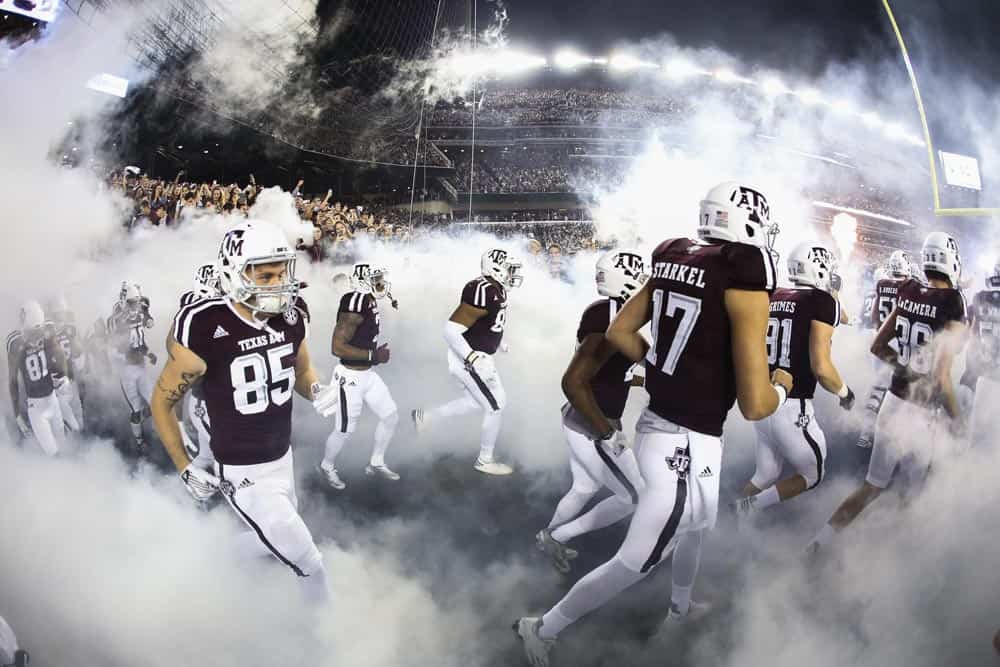 The Texas A&M Aggies will play the Northwestern State Demons in 2018 and the Lamar Cardinals in 2019, FBSchedules.com has learned.

Texas A&M will host Northwestern State at Kyle Field in College Station on Sept. 1, 2018. The Demons will receive a $515,000 guarantee for the game, according to a copy of the contract obtained by FBSchedules.com via a public records request to Texas A&M.

The 2018 meeting will be the first ever between Texas A&M and Northwestern State on the gridiron.

Northwestern State competes in the Southland Conference in the Football Championship Subdivision. The Demons finished the 2016 season 1-10 overall and 0-9 in conference play.

The Aggies will host the Lamar Cardinals at Kyle Field on Sept. 14, 2019. Lamar will receive a guarantee of $500,000, according to a copy of the contract obtained by FBSchedules.com.

Lamar, which also competes in the Southland Conference, completed the 2016 season 3-8 overall and 3-6 in conference action.

The addition of games against Northwestern State and Lamar tentatively completes Texas A&M’s non-conference schedule through the 2020 season.

Last week, Texas A&M announced a home-and-home series against the Miami Hurricanes. The Aggies will host the Hurricanes in 2022 and will travel to Miami in 2023.

The great SEC back at it! Who needs to play min 10 power 5 games when you got ESPN and Alabama to prop you up… Smh.

Texas A&M will play a tougher schedule with Northwestern State on the schedule than Ohio State will play with 10 Power 5 teams on theirs.

Wow this S-O-S will impress the CFPC, and then it could be that in 2018 TAMU reach the Sugar Bowl. Northwestern is a very tough team.

What will impress the CFPC is the games against Alabama, Mississippi, LSU, Arkansas, Auburn, Mississippi State and two SEC teams from the East.

That is a far tougher slate, even with Northwestern State than getting Indiana, Illinois, Minnesota, Rutgers, and Maryland…

I find it disturbing how much hate people who comment on this site have for the FCS schools. What you seem to forget is that, for most of them, one of their biggest sources of revenue is from the checks they get for the privilege of being beaten up once a year by an FBS school.

Mr. Kelley, correct me if I’m wrong, but I’d imagine that a lot of these lower programs would be in dire straits if not for the boost in revenue they get from playing these games. It allows them to make facility improvements and pay coaches, and who knows what else.

I’m a fan of and attended a Power 5 school, and I have no problem with every school in FBS playing 1 game against an FCS opponent. Make it the homecoming game, the FCS team gets the crap beat out of them (or not!) and they get a fat check to take home to help improve their program, or even keep it running. But to do that, an FBS team has to schedule an FCS team. What is wrong with that I ask? And, if every FBS team does this, doesn’t that level the playing field significantly as far as strength of schedule goes? Not to mention that these kids get the thrill of playing against a big program in a big stadium. Something they’ll probably remember for the rest of their lives.

So why all the hate for the FCS?

Hey I’m new here. But ive been using This website for awhile now. I completely agree with you. It helps these schools to keep their team running.

Could not of said it better myself & as usual, some people luv to complain about anything or everything.

It also helps teams like Boise State, Appy State, Georgia Southern and others make the jump to Division I-A…

They way some people complain, they would rather those schools stay Division I-AA for some reason.

FCS schools are good teams for the Sun Belt,Conference USA and the MAC to square off with.
I just think the SEC should do a better job of not only playing quality schools but playing on the road as well…..a neutral site is not a road game.

The only time Billy Bob Joe and O Da Do Da Day don’t have a problem with a schedule is when it is an SEC schedule.

Really? I don’t have a problem with anyone’s schedule because all conferences do the same thing. The only time you come on here is to name call, add names or letters to other people’s names, bash the SEC on anything & everything (minus Bama of course), complain about neutral site games, who the SEC is playing, who the SEC is not playing, point out when the SEC loses, point out when the SEC wins by small margins, keep track of the OOC record for the year on the SEC, complain that the SEC does not play enough H/n/H games, make excuses to why the SEC won, complain about the bowl match-ups with the SEC teams, complain about where the bowls are held at with SEC teams & why it was such an easy victory for the SEC teams, complain about SEC playing FCS when all other conferences do it as well, complain about a 9-conference schedule that the SEC & ACC do not have, bash other small teams & call them cupcakes & creampuffs even though some times those smaller teams are better then whats at the bottom of any conference. Complain about SEC OOC schedule (as doing here) yet Big-12 has also scheduled these teams as well but no Big-12 bashing. I am sure you are getting ready for bowl season with the SEC & will be keeping score. Btw the SEC got 12 schools into bowls & will be making 22.225 million & that does not include Bama & Auburn, that’s why bowls are meaningful. I think I covered everything.
Honestly, you need a 30min show once a week on the BIG Network just so you can sound like a broken record with all your negative information on the SEC.

I only provide information and statistics to refute when you SEC fanboys just bellow out, “S-E-C! S-E-C!” to every discussion and then devolve the discussion to mama jokes when that information does not look well upon your beloved SEC. As I have stated before. I am am a College Football Fan. Not a Conference Fan. SEC Fanboy worship ruins part of the fun of being a fan of this game.

Speaking of a broken record, re-read the first sentence of the last paragraph of your above post.

A perfect reply! Thanks for taking the troeblu.