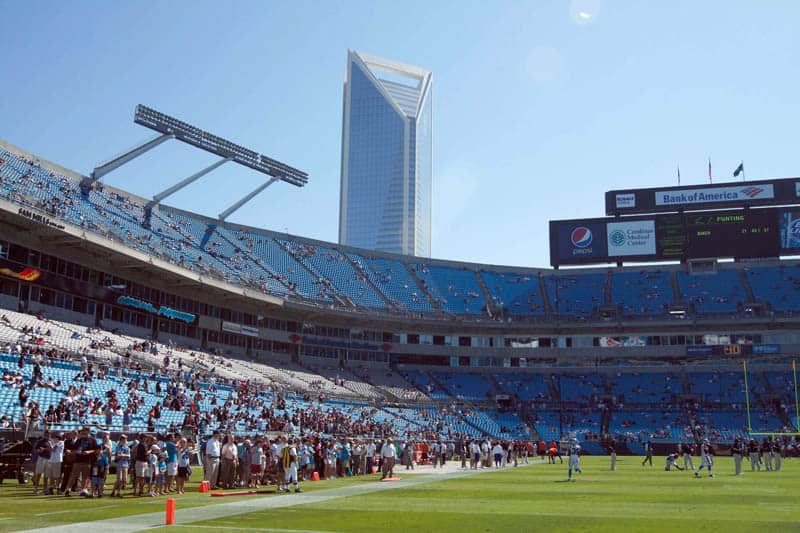 The Tennessee Volunteers and the West Virginia Mountaineers will open the 2018 season in Charlotte, the Charlotte Sports Foundation has announced.

The game will be played at Bank of America Stadium, the home of the Carolina Panthers, likely on Saturday, Sept. 1, 2018, although an exact date remains to be announced. It will be the first ever meeting between the Volunteers and the Mountaineers.

“We are very excited to announce that the University of Tennessee and West Virginia University will be playing in Charlotte to kickoff the 2018 college football season,” said Will Webb, Executive Director of the Charlotte Sports Foundation. “This will be a tremendous game featuring the SEC and Big 12. Both Tennessee and West Virginia have very active, supportive fan bases. The game offers local, regional and national attraction. And Charlotte is a premier location between the two schools.”

West Virginia is the first announced non-conference opponent for Tennessee for the 2018 season.

The Mountaineers are set to open the 2014 season vs. Alabama in the second of two Chick-fil-A Kickoff games at the Georgia Dome in Atlanta.

West Virginia is also slated to open the 2017 season at FedExField in Landover, Maryland against the Virginia Tech Hokies.

The Volunteers are also the first scheduled non-conference opponent for West Virginia in 2018.

This is a nice game for WVU, as are the Alabama and Virginia Tech games, but it is a shame that they aren’t reigniting the Pitt series. With only three non-Big 12 games a year, WVU ought to be working on series with lontime former opponents like Pitt, Penn State, and Syracuse.

@michael great point man.. the b12 is all messt up so with them having 10 school, all the great rivals dat has been corrupted should be renewed more so never been dismantled. so have va tech vs wv, or pitt vs wv, texas vs a&m, a&m vs texas tech or mizzou vs ou examples like dat would give the big 12 more respect and more competitive until they get 2 more school back!

They do have a 2 game series with Penn State in 2023 and 2024. I believe they also consider the Virginia Tech game to be a “rivalry renewed”. The new ACC teams probably have as much to do with Pitt and Syracuse getting used to their new scheduling situation as it does with WVU.

Honestly, while I think the Big 12 is fine for now (I guess we’ll see how it works out with getting teams into big bowls and the playoff), that they were too passive in realignment. I think at least one of these WVU rivals along with some longer-term ACC teams would have been open to ideas before they made a push to stabilize their league… and it would have been nice for WVU to have a rival (if not a whole division) that made a bit more geographic sense than the current situation.

Your pic looks to be a third quarter shot from the ACC Championship Game…..

West Virginia has stated that they would love to add Penn St., Pittsburgh, Virginia, and Virginia Tech to their futures schedules. They are kind of hamstrung on this with the nine game conference schedule with the Big XII (which geographically makes no sense but then again none of this conference re-allignment is. See Maryland, Rutgers, and Missouri.) Also keep in mind that most years they do play Maryland but that series is going to be less and less as well.