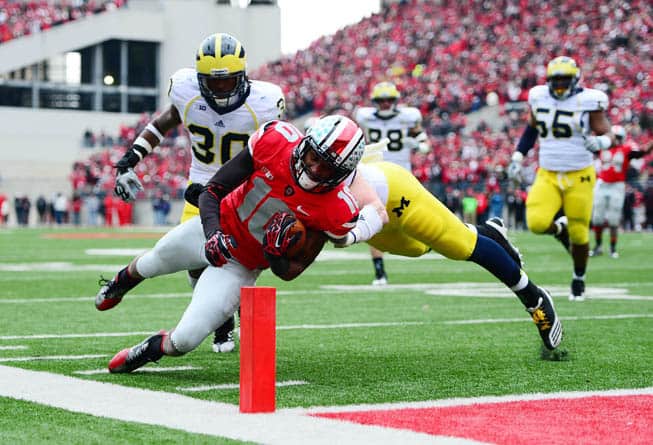 SEC? Check. ACC? Check. Best list of games ever assembled? We’ve got that, too. We’re moving on in our Most Anticipated Games of 2013 series by heading to the Midwest to tackle the Big Ten.

Long time rivalries and some thrillers from last season litter this list as well as games that will weigh heavy in the last year of the dreaded Leaders and Legends divisions.

Ohio State opens up Big Ten by playing Wisconsin, a team they slipped by in overtime last season. Here’s to hoping this years match-up is as good as last year’s showdown in Madison. The winner of this will have an early leg up in the Leaders division.

Someone has to step up and challenge Ohio State in the Leaders division. Penn State could be that team if they can win on the road because the road team has won the last two meetings between these two.

One of three games on the list for the Wildcats and one of two for the Cornhuskers. Both teams feature dual threat quarterbacks in Martinez and Coulter and both defenses can be suspect at times. Look for a shootout in Lincoln.

This one won’t be fireworks and it won’t be the cleanest game on the list. If you know Big Ten football, though, then you know why this game is on the list. Purdue and Ohio State have split the last two meetings, the home team winning both. Margin of victory in those two games? A total of ten points.

There’s not too much to say about this game because you never know what to expect. Michigan broke Michigan State’s win streak in the series last year, but Michigan has lost their last last two in East Lansing. This rivalry has provided some thrillers. If you sleep on it, one will happen.

There’s two reasons this game is on the list. The winner will probably play in Indianapolis, and it’s almost impossible to predict what will happen. The home team has won each of the two conference match-ups, but in totally different fashion. Michigan routed the Cornhuskers in 2011, and Michigan’s offense struggled with the loss of Denard Robinson in 2012. Two contrasting styles of offense combined with the departure of Robinson will make for entertaining football.

This should be the biggest game of the year for the Wildcats, and they get to host it, too — more on that later. Northwestern is trying to become a power in the Legends division, and they’ll have to beat the consensus favorites in the division to do so. They played the Wolverines tough last year, and they are looking to complete the upset this time.

Northwestern is a popular sleeper pick in the Legends division. If they want to contend for the division, they have to win at home. This is the second game on the list that Cain Coulter and Northwestern host, and they will try to make it two in a row against Sparty this year.

Anytime the previous year’s game went to overtime, it almost automatically earns a spot on this list. Being so late in the season too, if Ohio State slips up, it could decide the Leaders division. Can Wisconsin return to Indy in its first year without Bret Bielema?

Many people think this is going to be a preview of the Big Ten championship game. The playing field should be even this year, with the brand new coach winning each of the last two meetings. Ohio State is expected to be in contention for a national title, too. Can Michigan ruin that in Ann Arbor? It’s called “The Game” for a reason.

What about Ohio State at Northwestern? Besides the Michigan game, this is the biggest test for the Buckeyes all year. That game will be very high scoring and exciting to watch.

Wildcats are pretty good for a school of only 6 or 7 thousand undergrads. They are smart like S. Hawking and can whip any other team 1 handed. GO CATS!

this article is retarded.

I’m sorry you feel that way, Greg! Thanks for the read, though.

Illinois will seek to avoid double-digit losses, while Indiana will fight for the right to get destroyed in the Taxslayer.com Bowl. I can see why this rivalry tilt garners an honorable mention :-P

Understood, but making these lists is tough. It would be too easy to list every Ohio State, Michigan, Wisconsin, Nebraska etc. game and be done with it.

Some of the games are there because they are rivalry games.

I tried to include more than just the big schools, like Kevin mentioned. The game should be a high scoring shoot out.

Why does every frickin list include the retard Fuskers. They have not been relevant nationally in this century…duh!

jeep33- I agree 100%. And I live in Lincoln! This overrated team and their numb-rod fans are unbelievable. Not everyone is NU fan.

I’m an Illinois fan, but let’s face it – the Illinois football program has been less than “shining” for quite a few years now. Why the Illinois / Indiana game is even mentioned is puzzling to me!
I’m just glad we don’t have to play Alabama or Auburn – SHEESH!!

After UCLA game, Nebraska less of a factor than before. Their new goal should be: 4-4 in conference play. Won’t be easy.

What about Purdue v Notre Dame?

NOBODY will beat the BUCKEYES this year, unless it’s the ref’s! The Buckeyes can’t even seem to get a Homer at home! Bert Heyder, Naples, Florida

Mich.is the team to watch good enough to take the bucs. 31 to 28 is a realistic score if urban can keep his quarterback healthy it’ll be close.

And give it up bert osu plays two teams maybe three that has any real skills hopefully some of these smaller programs step it up.

hey I feel the exact same way and I’m in Ohio too… like 5 miles from osu suckeye campus lol go blue!

Wisconsin vs. ANYONE in the big ten or elsewhere is an AWESOME game! Big soffenisve line, amazing running back x 3 and now Stave can throw the ball. It took sixty minutes for OSU to beat the Badgers…..they will not go quietly into this good night!

HAWKEYES staying under the radar but will be the spoiler to rise this year. See ya in the big ten championship!!!

I would say Air Force at Michigan State