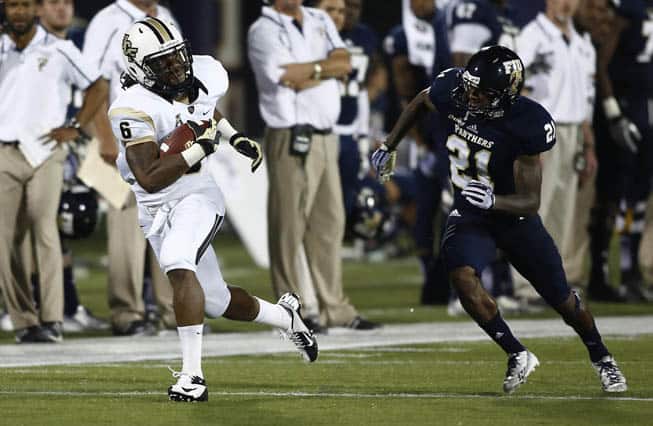 FIU and UCF had to postpone their 2014 game. (Robert Mayer-USA TODAY Sports)

Most teams have their 2014 non-conference football schedules set, but there are still a few that need one game.

There are four teams from the Mountain West that can play a 13-game schedule (5 non-conference games) based on the Hawaii Exemption. Under that rule, teams that play at Hawaii have the option of adding a 13th game to offset travel costs.

Of the four MWC teams playing at Hawaii in 2014 (Nevada, UNLV, Utah State, Wyoming), only Utah State has scheduled a fifth non-conference game.

Hawaii can also play a 13th game every season, and they currently only have 12 scheduled for 2014 (Update: Hawaii added a 13th game at Rice).

Pac-12 teams Oregon State and Washington also play at Hawaii in 2014, and only the UW has scheduled an additional non-conference game.

So that leaves Hawaii, Oregon State, Nevada, UNLV, and Wyoming with the option of scheduling an additional game. At this point, it would be unusual for any of these teams to add another game to their schedule, but still possible.

LSU has already announced their 2014 schedule with NMSU on it. Of course, they could still make a change if necessary.

Below are the teams that currently need one 2014 non-conference game. Theoretically, these schools could look to schedule each other, but it’s hard to decipher if they could play without knowing conference game dates

TEAMS THAT NEED A 2014 NON-CONFERENCE GAME

Houston already has one FCS game scheduled (Grambling). The Cougars likely don’t want to schedule a 2nd FCS team because only one win counts towards bowl eligibility.

Like FIU, UCF’s 2014 non-conference schedule was complete until the postponement of their game. The Knights will likely schedule an FCS team.

TEAMS THAT NO LONGER NEED A 2014 NON-CONFERENCE GAME

Arkansas State has non-conference games slated at an SEC and an ACC team, and home against a good MWC team. It’s likely they will look to the FCS ranks to complete their schedule.

**Update: Arkansas State has completed their 2014 non-conference schedule with the addition of Montana State.

Buffalo already has one FCS game scheduled (Norfolk State) and likely wouldn’t want to schedule another because only one FCS win counts toward bowl eligibility. UB may already have their fourth non-conference game scheduled because their athletic director tweeted in late December that they will have seven home games in 2014 (4 MAC + 3 non-conference).

**Update: UBBullRun.com reports that Buffalo will host Duquesne on Aug. 30.

FIU’s 2014 non-conference schedule was complete, but they had to postpone their game at UCF due to a scheduling conflict. The Golden Panthers already have an FCS game on the schedule.

**Update: FIU has completed their 2014 non-conference schedule with Wagner on Sept. 6.

What about Hawaii? They can also add an extra game if they choose.

Yes, you are correct.

And now they have, taking up a game at Rice, to fix Rice losing NMSU.

Shawn, as a matter of fact, Hawaii Athletics Director Ben Jay is actively trying to add a 13th game for 2014. UH did not play a 13th game the first two years under Norm Chow … Norm’s decision. But, UH needs the money from another home game or road game payday. So, they are trying to play a 13th game this year.

Would be nice if New Mexico State’s cancelled game is against Rice or LSU. That way Rice can pick up Houston or LSU can pick up Tulane.

You’re right because NMSU has 13 games, and they don’t play at Hawaii.
Therefore, they should drop LSU, and LSU can pick up FIU or Houston. It would be neat if they scheduled a home-and-home with Houston because the schools are kind of close to eachother.
Then, FIU and Buffalo can schedule a home-and-home (@Buffalo in 2014, @ FIU in 2015).
Then, Ark St and UCF can pick up FCS opponents.

LSU is start in to get a little bit nervous with the rapid resurgence of Tulane’s program.

It isn’t easy to move a date only 8 months in advance. People have booked plane flights arranged work schedules, and even planned weddings around either the game or the off week. The hotels i Provo fill up with football fans on game weekends and book conventions weddings and what not on the non-weekends. The TV schedules may be set as well. Houston would have to pay a big price to get BYU to accommodation them. Also NMSU isn’t going to cancel against LSU as it is likely their biggest payday of the year. they are going to do whatever is best for them financially. FIU and Buffalo might work; but both of those temas probably would prefer to get paid for a bodybag game than host a home game against a low-major from another reason. I would guess that the number of FIU fans who would trek to Buffalo is near zero.

Well Buffalo just set up a home and home with FAU so its a place we want to play.. As for “pay day games” UB’s AD has indicated he wants to get away from those and get to more 7 home game seasons.

New Mexico State will probably cancel one of its’ road games as they have three, and probably want to retain an even balance of 2 home 2 away non-conference games, and to also give them six home games overall. That being said, LSU, UTEP, and Rice are the away games. LSU is a big payday, so that will probably remain. UTEP is a rivalry game, a longer term series, and is only 40 miles away, so that will probably also remain. I see the Rice game getting canceled.

Hopefully, Rice then can play Houston on Sept. 6 or Sept. 20 (depending on American schedule) and extend the Bayou Bucket series another year. Even though not as big as other rivalry games, it is games like these that have become the casualties of conference realignment.

UTEP is also free to play NMSU (currently date TBA) on Sept. 13 (or Sept. 20 which would involve some slight maneuvering of the New Mexico game).

This is my revised plan based on others’ comments:
-NMSU will cancel thier road game @ Rice, and reschedule it for 2016.
-Rice will replace that with a game vs Houston.
-UCF will schedule an FCS team or schedule a game vs FIU for November. Since there are an odd number of teams in the C-USA, a odd number of teams will have to have conference byes (meaning they can’t play a conference game). This is why placing this game in november makes sense.
-As for Buffalo, they can schedule a home-and-home with Hawaii for September 27th in Buffalo, and a date TBD in 2015 @ Hawaii. If UCF schedules an FCS team, then just replace Hawaii with FIU.

Southeastern Louisiana head coach tweeted today that they are playing Rice in 2014. Working to verify.

Rice and UH are both looking for home games so UH v. Rice won’t happen.

Rice needs another home game to make it six. UH already has six home games, so they don’t necessarily need the seventh home game. In fact, looking back to the past few years, UH usually only has six home games (had eight the one year). Plus, UH already has the FCS team on their schedule. FIU seems to be the only team willing to travel of the teams mentioned above. So I could see UH at Rice happening.

Assuming Rice and SE-LA play each other on 9/6, then Rice and NMSU will postpone their meeting until likely 2016. Then, that leaves 4 teams (Buffalo, Houston, FIU, UCF) with only 11 games on their schedules. There are two options for how this will all play out.
Option A (The more likely one):
UCF schedules an FCS opponent. Since the other three teams in this group already have FCS teams scheduled, they likely won’t schedule another FCS team since only one counts towards bowl eligibility. Out of the group of now 3, one of them will schedule a hoe-and-home with Hawaii. Then, the two remaining will schedule a home-and-home with each other.
Option B:
FIU and UCF have cancelled this year’s meeting between the two schools because they couldn’t agree on a date. However, it is conceivable that they could play in November (see my previous comment for more clarity). In that case, Buffalo and Houston would schedule a home-and-home with each other (10/4 @ Buffalo, and a date TBD @ Houston in 2015)

Maine has an open date on Sept.6…..would be a good FCS game for UCF.

Now That Buffalo has scheduled Duquesne, Houston will play Hawaii, and FCS team, or a team that plays @ Hawaii this year and has only scheduled 12 games (Nevada, UNLV, Wyoming, Oregon St)

Any word on who Houston is going to play? It will have to be an FCS team or a team who plays at Hawaii that hasn’t scheduled a 13th game (Nevada, Oregon St, UNLV, Wyoming).

No word, but it’s rumored to be announced soon.

UCF is going to play Bethune Cookman either 9/20 or 9/27. This one folks is a freakin lock. BCU is in Daytona Beach – 45 minutes from Orlando and is already scheduled to come to Orlando for the Florida Classic vs FAMU. Which they already do yearly. They have a good size alumni base in Orlando and will help fill a most likely sparce Saturday daytime crowd (My 2nd assumption is a daytime game). Their band alone might help bring a few fans to the game. UCF is notorious for rowdy tailgating and crowds vs. top tier foes and USF, but daytime games like this or any other FCS opponent wouldn’t have sold out just like UCONN didn’t last year. Smart decision by UCF honestly and should make for a pretty rowdy crowd. It reignites a once 15 year rivalry (yes they were once rivals) that has been dormant since 1996. The reason that UCF cut the FIU game wasn’t because it couldn’t be rescheduled, we all know November would have worked. It was just in the best interest of UCF and FIU to have a game on the two dates above and I don’t think FIU could make it happen. UCF wanted Bye’s after coming back from Ireland and before BYU at home and didn’t want to lose a bye week in the middle of the conference schedule. I guess they are waiting for Houston to find an opponent so the AAC in general can release the game dates. We already know the opponents.