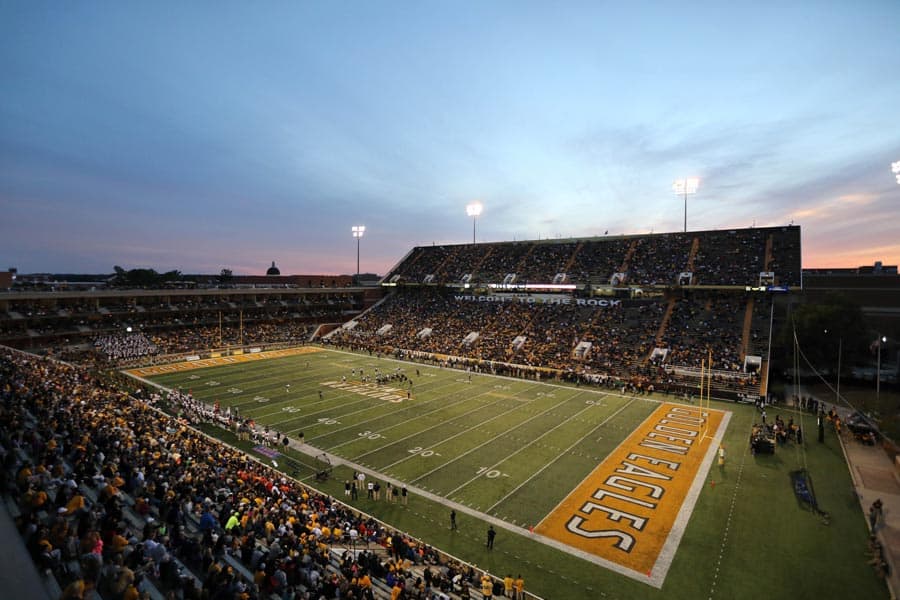 The Southern Miss Golden Eagles and the ULM Warhawks have scheduled a home-and-home football series for 2017 and 2018, FBSchedules.com has learned.

In the first game of the series, Southern Miss will travel to face ULM at Malone Stadium in Monroe, Louisiana on Sept. 16, 2017. The Golden Eagles will then host the Warhawks at M.M. Roberts Stadium in Hattiesburg on Sept. 8, 2018.

The teams will swap $200,000 guarantees, according to a copy of the contract obtained from USM via a public records request.

Southern Miss and ULM have met four times on the gridiron and all four games were played in Hattiesburg. In their last matchup in 1993, the Golden Eagles beat the Warhawks 44-37 to take a 3-1 lead in the series.

USM was previously scheduled to visit Tennessee on Sept. 16, 2017, so that game is moving to an undetermined date that season. Southern Miss is currently scheduled to open the 2017 season at home vs. Kentucky on Sept. 2.

In 2018, the Golden Eagles have one other non-conference game scheduled — a Sept. 15 trip to Appalachian State.

In addition to the home-and-home series with ULM, Southern Miss has also added a Sept. 10, 2016 home game against Savannah State. USM was previously scheduled to host Austin Peay on that date.

According to a copy of the contract, Southern Miss will pay Savannah State a $325,000 guarantee for the game.

Any USM fans – Is it right that BYU-USM is dead? Thanks.

I don’t know about BYU but USM has been dead for a few years.

USM is 4-3 at this point of the season Dave. Looks like they may be rising from the dead!

Technically you are correct. I will be a believer when they beat a team with a pulse. Have you looked at the records of the teams that USM has defeated? They are all bottom of the barrel programs.

USM stomped 9-4 LA Tech at their place. So there you have it.

It’s tough for So Miss to compete when the star players want to attend a Power 5 Conference school. If So Miss say was to get an invite to the Big 12 the program would change quickly. It takes money, political connections and some luck, all of which So Miss lacks. That pipe dream will never happen, I support my alma mater with a check every year, truth is they should drop the program, until every division 1 program has a legitimate shot at being a national champion what’s the point. The Power 5 are greedy institutions who want it all, unless your a member your really nothing. Basketball can do it, football could also. #SouthernMississippiUSM

USM’s only hope is to get an invite to the AAC when the Big 12 adds one or two AAC teams.

Not to slam the other two Division 1 schools within the state of Misissippi, but if they had to meet today’s requirements that the so called Power 5 are looking for such as location, location, location I just don’t see how they would ever get into the SEC. The most perfect located university within the state is by far Southern Miss. And our administration has got to figure out how to get this across to the NCAA and more importantly by able to claim our TRUE tv market!!!

Sorry for the length of commit, but I have been holding this for a long time!!!