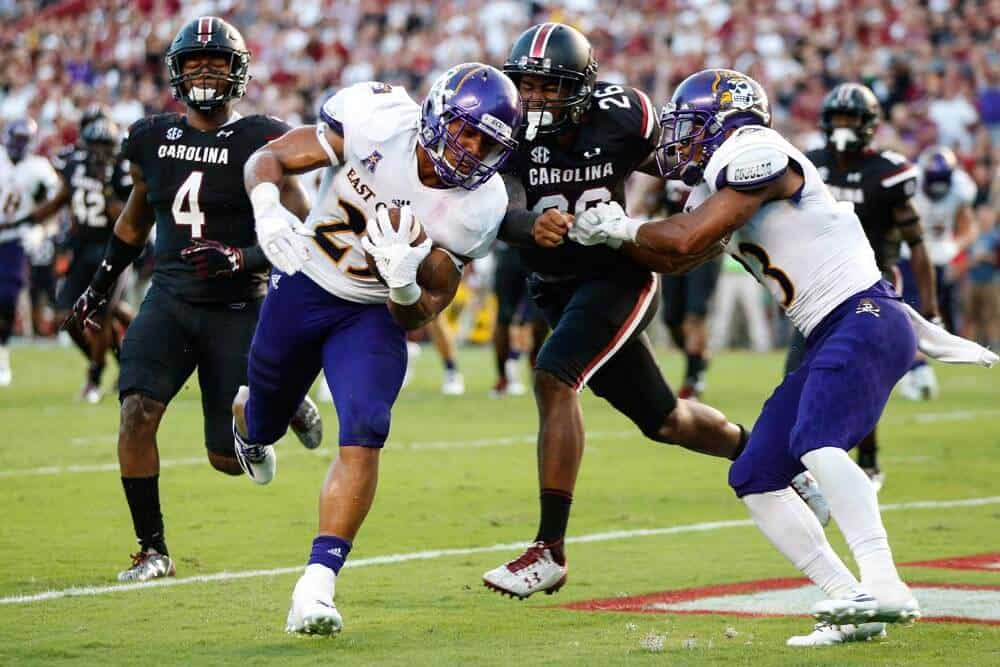 The South Carolina Gamecocks have canceled their 2019 football game at the East Carolina Pirates, according to ECU athletics director Jeff Compher.

247Sports reported the news on Tuesday after Compher made the announcement on Pirate Radio 1250/930.

“We did hear that South Carolina will not be coming here in ’19,” Compher said. “They have a game in Charlotte and that limited the number of home games they had, so they elected not to come here.”

According to a copy of the contract obtained by FBSchedules.com in 2015, there is a $1 million cancellation fee for each game. Therefore, the Gamecocks will owe the Pirates that fee for backing out of the 2019 contest.

Back in 2015, South Carolina agreed to play North Carolina at Bank of America Stadium in Charlotte in 2019 and 2023. If the Gamecocks played at ECU in 2019 as well, that would leave them with only six home games whereas most most Power Five schools prefer seven.

East Carolina now has an opening on their 2019 non-conference slate. The Pirates are scheduled to travel to NC State (Aug. 31) and Old Dominion (Sept. 28) and host Virginia Tech (Sept. 21) that season.

South Carolina is scheduled to open the 2019 season vs. UNC in Charlotte and later hosts Charleston Southern (Nov. 23) and Clemson (Nov. 30).

It is great to see the continuing dumbdown of SEC non league games even by the SEC weaker teams. How about another game with Wofford or some other school with a middle name?

Yeah, playing North Carolina and Clemson in the same year, along with Georgia, Florida, Tennessee, and Texas A&M is really dumbing it down.

Wofford would scare S Carolina, like Citadel did in 2015 (Gamecock loss)……..maybe go for Miss. Valley State….

Nobody at ECU expected USC-East to honor their contract. Same thing happened when another SEC team (Kentucky) back out after a close win at home against ECU.

West Virginia will be the next to bail on us.

Every team in FBS should be allowed only six home games. Period. It’s getting impossible for G-5 to schedule Power 5 teams. Hopefully, ECU can convince Miami or Georgia Tech to take up a series. Both of those schools need a road game in 2019.

With the move to not schedule FCS teams (SoS), which the entire Power 5 will follow at some point, Group of 5 games will become more desired. We are already seeing record high payouts ($1.3M+) for G5s to come play at Power 5s. This trend will continue and eventually you may see G5s drop FCS games which I’ve already noticed.

The unfortunate part of this scenario is that FCS teams will suffer because they rely heavily on the large payouts provided by the Power 5s. If I recall, G5s only pay something like $400,000-500,000 for a FCS team to come play at their place. Long term you could see some bottom feeder FCS schools drop to Division II. Savannah State just announced this very thing…because of money.

It will be interesting to see how things develop over the years but I think the Group of 5 is in a position to grow from a financial standpoint which could translate to better on-the-field performance…more money –> better facilities –> attract better athletes etc. etc.

– What’s the source here? I heard Compher in the interview directly state that they would continue to try to bring a big name to Greenville as a replacement.

Just my opinion based on this:

“I want to be able to fill it with a good home game,” Compher said of the newly created opening. “It might be a name people are familiar with, but probably not an SEC team.”

Gotcha. Was just curious. I definitely hope you’re not right. Haha. I think ECU fans would be pretty let-down with a middle-to-lower FBS team, unless it was a regional or historic rival. Marshall, Southern Miss, Charlotte, and App State are already booked up, and Old Dominion is already on ECU’s schedule.

Western Michigan is in dire need of future opponents, maybe they’ll hop in for a H&H

So what will be the Cock’s excuse when they cancel the 2021 game at ECU?

SEC programs bail on many more OOC games than programs from other conferences do. Schedule a H-H with an SEC program at your peril.

Chicken shit move by SCar…so instead of six home games, one neutral site games and five true road games, they are going to play seven home games, one neutral, and only one true road game. Please. These contracts have to start carrying larger buyout fees…it’s going to be hard for ECU to get a single home game against a good opponent a) with only one million bucks and b) given a lot of 2019 schedules are already filled. They will likely have to pay some MAC school all of that and some more and that might require some luck.

They will play AT Georgia, Missouri, Tennessee, and Texas A&M.

It’s all about having 7 home games. I’ve been to USC games in Greenville twice in my lifetime — 1985 and 1997, I believe. Don’t say we won’t come up there because we have. We’re in a much different place financially now than we were just 5 years ago so the days of SEC teams visiting group of 5 teams is probably over except for maybe a Vandy or Miss State. I have no problem keeping the game in Greenville in 2021 though since we will still have 7 home games that year. I was in college back when we made the trip in 1997 and had a great time.

I hear you, but your perspective is an absurdly selfish one.

South Carolina made a commitment to East Carolina that they broke. They knew how many home games they had lined up in 2019 when they scheduled the neutral game, yet they scheduled it anyway. It puts ECU in a very bad spot when commitments like these are broken.
And please don’t tell the G5 fans, how hard an SEC school’s financial situation is.