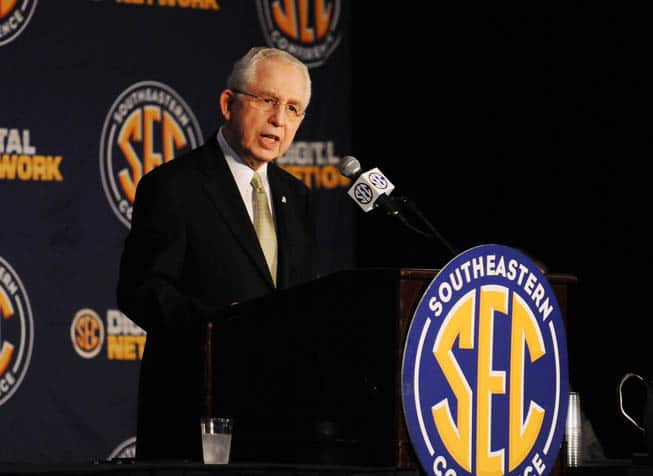 With the announcement of the upcoming SEC Network on Thursday, discussion and speculation about a nine-game SEC football schedule is heating up.

But SEC commissioner Mike Slive wants everyone to know that the launch of the SEC Network will not determine whether or not the conference does make the switch from eight to nine games.

“People make the connection between eight or nine games and the network and that’s not true. That’s not a connection. Our football scheduling philosophy will be done one way or the other regardless of the network. It doesn’t change anything,” Slive told Gametime this weekend.

“I think given the new playoff structure that’s coming, that will serve as a catalyst for further discussion as to whether or not we stay where we are, or whether we consider nine games, or we consider some other rotating format. And I think those conversations will take place. But the important point I want to make here is that…those conversations are not related to the network.”

Although Slive emphasized that the SEC Network will have no effect on the football schedule format, he did say they will have “further discussion” on the schedule in light of the upcoming playoff.

Those discussions will likely take place at the end of May at the Spring meetings in Destin, Florida. If nothing is settled then, talks could still continue well into the future.

But before that is resolved, the SEC will reportedly release the conference football schedule match-ups for 2014 through 2016. Last week, Georgia athletics director Greg McGarity told Seth Emerson of The Telegraph that it should be sometime soon.

When Emerson inquired about the very same thing at the SEC Network announcement on Thursday, Mike Slive replied “Soon, I hope. Hopefully before (Destin).”

Back to the nine-game schedule talk, is it absolutely necessary the SEC move to that format? That will be tough to decipher until after a season or two has been played with the new College Football Playoff. Only then will we be able to see what criteria the selection committee uses to place the four semifinal teams.

If the committee simply says, for example, Ohio State had a tougher schedule than Florida because the Buckeyes played one more conference game than the Gators, then the SEC may need to take action.

On the other hand, the committee may break down each team’s schedule and look at it opponent by opponent. In that scenario, SEC schools could take a more aggressive approach in scheduling non-conference games to offset the extra conference game others are playing.

Using Florida as an example again, who plays Florida State every year, if they make a concerted effort to play Miami (FL) more often or perhaps another ACC or Big 12 school, that could be seen favorably in the eyes of the committee.

With all of that being said, there are a lot more questions now than there are answers. As the new system gets closer, the SEC and its members will have to adapt to the changing college football landscape.

Personally, I think it could go either way. SEC teams don’t absolutely have to add a conference game to have a tougher schedule. They can always schedule tougher non-conference games on their own. It will likely come down to what criteria the selection committees bases strength of schedule on and what, if any, computer formulas are used.

How do the league’s coaches feel about moving to a nine-game conference schedule? Here are some quotes:

“I’m for playing nine conference games; I was the only person that spoke out in favor of it last year.”

“To be honest with you right now, I’m just focused on year by year,” Malzahn said. “We’ve got our hands full with next year and we’ll have discussions with the SEC commissioner and all that.”

“I’m not for a nine-game schedule. I don’t think it’s best for our league. It’s too challenging with the in-state rivalry we already play. You add a ninth game (in the SEC), it’s too difficult.”

“Most coaches like eight games,” Missouri coach Gary Pinkel said. “One of the reasons is that it’s such a tough league. It certainly has a huge effect on your four nonconference games going down to three. If you’re a coach, you recognize that.”

“The three of us (Florida, Georgia, and South Carolina) have a pretty tough game already. But it could go to nine. Whatever they say is fine with me.”

“You go to nine games, and people are gonna be less likely to play the out-of-conference games, the big games out of conference that people are playing now. Eight games allows everybody to solve their own problems, and what I mean by that is if you think you’re in a position to play for a national championship and you want to schedule a tough out-of-conference schedule for strength of schedule, then go do that.”

Why does the SEC have to make exceptions for just three members? Of course the only way 9 games will happen is if the SEC needs it to get extra spots in the playoff.

The 9 game conference schedule has its flaws but its better when you have 14 teams… If you have 12 teams than 8 games is perfect. I like 9 games so you see more conference opponents. I don’t like some teams getting 5 home games and some getting 4 though…

There’s also the issue of the Georgia-Florida game in Jacksonville. In years that either team is the “visiting” team, they could only have three SEC games at home. That’s not good.

yep. that will cause an issue…

I just don’t like the thought of playing a 6-1-1 schedule with 14 teams. that means you will see 7 members every year, and the other 6 twice every 12 years… if you go to 9 games, you will see an opponent twice every 6 years. makes a big difference. why would you want to never see teams in your own conference unless you make the conference championship game and then it might just be a possibility?

the other thing this impacts is OOC scheduling negatively. instead of taking away a cupcake FCS game, teams will take away the bigger AQ conference teams to ensure more home games. so this will help and yet still have it’s flaws…

It will be all about the Benjamins

SEC is not broken with 7 straight championships why would they even consider a 9 game schedule. Here are the reasons not to do it.

3. Respect the rivalries. Georgia, Florida and South Carolina finish their season vs their instate foes who happen to play in the ACC. Texas and Texas A&M have already broken up their rivalry due in large part to the Big 12 and their 9 game conference schedule. Similarly Utah of the Pac 12 has decided that bowl eligibility is to difficult to come by in a 9 game conference schedule and are therefore abandoning their longtime rivalry with BYU. They couldn’t even make a bowl game even with beating BYU in 2012.

Don’t forget that Kentucky plays in-state rival Louisville, which is joining the ACC next season, every season and that game would probably die off with an 9 game SEC schedule.

“WE PLAY A HARD ENOUGH SCHEDULE AS IS”

yes you do. and we applaud you for it. but anytime you can make it tougher and more challenging, you show the nation just how good you are. why wouldn’t you want to play a tough schedule to begin with? where is the fun in playing FCS foes? I understand why they do it, I just like it more when they don’t.

I can see playing 9 games with a 14 team conference (ala current SEC and future B10 and ACC). playing teams from the other division only twice out of 12 years seems like you’re really not in the same conference with them anymore. However, playing 9 games with only 12 teams as the PAC does is the height of foolishness. They will constantly be having rematches in their conference championship. They’d be 2 for 2 in championship rematches if USC hadn’t been on probation in year 1.

Why not always have Florida/Georgia and A&M/Arky at 4 home games, 4 away games, and always have that neutral game as the 9th game if they do go to 9 games?

That’s a good idea, but now sure how that would alter other schedules.